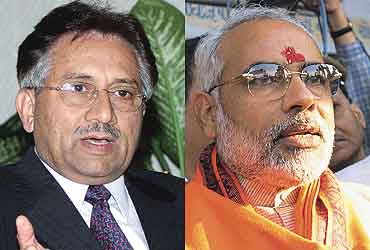 outlookindia.com
-0001-11-30T00:00:00+0553
An Indo-Pak cricket match is often first fought off the field even before the players descend on the pitch. More so if Ahmedabad is part of the equation. The forthcoming three-Test, five-odi series has been making headlines for the wrong reasons ever since Pakistan expressed its apprehensions over having it on its tour itinerary. There is now talk of a one-day international being played in the city as part of a compromise between the cricket boards of the two countries.

"Pakistan's reluctance to play cricket in Ahmedabad comes from a fear of defeat on the soil of Gujarat...a cowardly step. Insulting Gujarat is insulting Hindustan," thus spake Gujarat CM Narendra Modi at election rallies in Jharkhand. And he did not stop there. "Hindustan is expecting a day when Pakistan decides not to play the bloodletting game...in the same way as it apprehends defeat on Gujarat soil, it fears defeat in Kashmir. Was Janab Musharraf sleeping the last three years when several Pakistani delegations of doctors and other sportsmen visited and enjoyed Gujarat's hospitality?"

The Congress, which controls the Gujarat Cricket Association (GCA) led by senior leader Narhari Amin, feels it is Modi's "irresponsible utterings" during the 2002 election campaign that has led to the Pakistan Cricket Board's (PCB) refusal to play in Ahmedabad. Modi had then launched a no-holds-barred attack on Pakistan President Pervez Musharraf. Says Amin: "We don't think security is so much their concern, for two matches have already been played in Ahmedabad since the 2002 riots."

Amin is sure that it's Modi hatespeak that's the cause of all the furore. "It's because of Modi's speeches. But I wish to request Pakistan through the media not to break the hearts of the cricket-loving people of Gujarat, just because the CM has a tendency to fly off the handle. His statements don't reflect the voice of the people of Gujarat. We are eager to reciprocate on the warm hospitality Pakistan gave us during India's tour. The people of Gujarat assure you that you'll be safe here," he asserted. 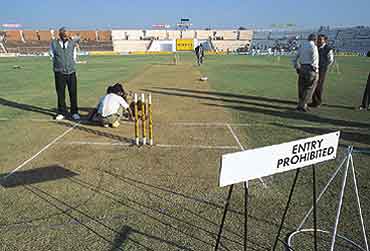 Meanwhile, on the other side of the fence, Gujarat BJP president Rajendrasinh Rana is livid. "If the Congress blames Modi, it's because they have forgotten the sequence of events. It's only after Pakistan refused to play in Gujarat that Modi spoke out at the Jharkhand rallies. No one need expect a meek defence of India from anyone in the BJP, Modi included. BJP leaders don't wear bangles. If they can't play in Ahmedabad, they should drop out from the entire tour."

The popular perception in Gujarat is that nothing untoward will happen. A BJP insider remarked quite aptly: "There is no election round the corner so there's no need to fear over festering trouble. Besides, it'll become a question of Modi's prestige should any lapse occur on the security front."

Adds Amin: "The entire route the cricketers are to take from the airport to the hotel and the stadium falls largely outside the city and there too, if they insist, we are willing to arrange for all kinds of security. Inside the ground, even water bottles or tiffin boxes are not allowed. There has only been one incident here—about 10 years ago—when the crowd became unruly because India was faring poorly. Since then, we have made elaborate arrangements."

Meanwhile, there are also efforts from citizens to persuade Pakistan to play in Ahmedabad. Gujarat High Court Advocates Association president Yatin Oza, who had contested against Modi in the 2002 assembly elections, has faxed a letter to Musharraf requesting him to "let the cricket-loving people of Gujarat return the hospitality Pakistan provided when the Indians went to play there". Oza, in his letter, also identified himself as a "diehard Modi opponent".Besides these, local papers are full of pictures of Muslims coming out on the streets requesting Pakistan to play a Test at Ahmedabad. The common consensus is that politics should not come in the way of the game. But unfortunately, more often than not, it does.

"People Are Behind King Gyanendra's Decision"