A Harvest Of Barefoot Inventors 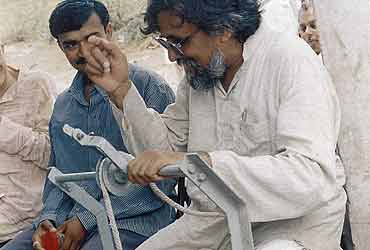 outlookindia.com
-0001-11-30T00:00:00+0553
Adversity in no way inhibits innovation in India. But such creative production is likely to be obscure. And yet, a quiet revolution is taking place in the countryside. Consider the case of Mansukhbhai Patel. This cotton farmer from Ahmedabad district’s Trent village didn’t mind toiling on the field but cracking the firm pods and extracting cotton manually was particularly arduous. Determined to redeem his situation, Mansukhbhai devised an implement to extract the cotton. Today, Mansukhbai’s gadget has been patented in the US and he sees an annual turnover of around Rs 2 crore. Last month he became the only grassroot innovator among 10 awardees chosen for the National Research Development Corporation (NRDC) technology award for best innovation in the country.

Amrutbhai Agrawat of Pikhor village, Junagadh district, similarly thought out of the box to solve a humble but nagging logistical issue. Farmers would physically move from one end of the field to the other to spread manure. A time-consuming process. Agrawat decided to amend matters: he attached a pulley to the bullock cart in such a way that it could be tilted to distribute the manure over the entire field. A patent for this has been applied for. Meanwhile, Amrutbhai’s mechanism is being used by entrepreneurs for a licence fee of $2,000.

These innovations would have been lost in the rural quagmire if it hadn’t been for Sristi. The organisation has documented as many as 36,000 traditional remedies and green innovations from 360 districts of India. Patents have been applied for. Sristi was the brainchild of Prof Anil Gupta, executive vice-chairman of the National Innovation Foundation (NIF) and a professor at IIM-A. "I always felt I drew so much from the fields which helped me get hefty consultancy fees but never gave it back," says Gupta. Gupta’s idea was to put together this rural knowledge, to create a triangle of "innovation, investment and enterprise." Started in 1990, he called it the Honey Bee network. "A honeybee collects pollen from flowers and connects flowers through pollination. We hoped that if creative people in different cultures communicate and cross-fertilise their repertoire of ideas, the low self-image of the poor will change and new sustainable technologies and institutions will emerge." Honey Bee is an international network of farmers, academics, scientists and artisans, who scout villages for grassroot innovations. It also publishes a regular newsletter in seven languages. In 1993, this informal footloose body was institutionalised as Sristi.

Having collected, documented and applied for patents, Gupta and the honeybees realised "nobody looked at village innovations for venture financing in the same way as no bicycle manufacturer thought of a cycle, like Bihar’s Salauddin did, that could function in flooded or inaccessible areas."

To help people like Salauddin, the Gujarat Grassroots Innovations Augmentation Network (GIAN) was formed in 1997. It includes government officials, social reformers and academics who mobilise institutions to test products made in remote corners, develop market linkages and patent them. Gupta says all this could not be possible without the support of IIM-A.