The Mashelkar committee recommends an overhaul of India's drug policy. It's a bitter pill for many. 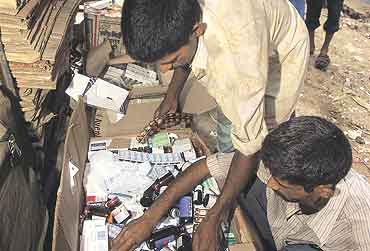 outlookindia.com
-0001-11-30T00:00:00+0553
Pharma manufacturers and sellers beware! In the near future, obtaining a licence may become tougher and even existing licences may be reviewed. If the expert committee headed by csir's R.A. Mashelkar has its way, the sector is in for a sea change. Outlook has exclusively procured a copy of the final report of the committee that was set up to look into the burgeoning spurious drugs trade in the country. The Mashelkar committee submitted an interim report in September. The final report will be submitted to the government soon.

In fact, Mashelkar has advocated an overhaul of the 63-year-old Drugs and Cosmetics Act (DCA). Besides changing licensing norms, he has asked for a revamp in the administrative and investigative apparatus and a greater focus on inspection and monitoring mechanisms, both at the manufacturing level and points of sale. Explains Vijay Karan, ex-police commissioner, Delhi, and a member of the committee: "We want to strengthen the system... (and) want the states to have intelligence units to unearth illegal activities."

However, the key recommendation is to centralise drug licensing by creating a new national body. Even food, diet and health supplements or products that use Indian Systems of Medicine (ISMs: ayurveda, siddha, unani, et al) will be certified and classified by the new body or an existing authority. At present, state agencies are individually empowered to issue licences to allopathic manufacturers and there is no co-ordination between them.

Given the plethora of authorities, it has become virtually impossible to check new entrants which has led to a chaotic growth of the industry. More important, it has resulted in an unbelievable increase in the manufacture and sale of spurious, fake and substandard drugs (See Outlook, Sep 22). States the report: "The committee observed that in India, because of numerous licensing authorities, the implementation of drug laws has been weak and non-uniform even after 56 years of enforcement. It is well established that the regulatory infrastructure in many states is below par."

So, the committee has suggested that a Central Drug Administration (CDA) be set up and it should be responsible for issuing all licences and the overall monitoring of the industry. The CDA will also be responsible for approving new drug launches by manufacturers. But the day-to-day operations, implementation of the various regulations, raids and checks would remain under state control. It seems that the Central Drugs Standard Control Organisation (CDSCO), which is responsible for testing and monitoring of the drug industry at present, might be metamorphosed into the new CDA. A centralised system exists in countries like the US, Australia, Malaysia, China, Brazil and South Korea.

In case of OTC products based on Indian systems, the recommendations are as dramatic. For instance, food, health and diet supplements should be regulated under the pfa Act and a new category covering these products should be created. Products that make therapeutic or medicinal claims should fall under the purview of the DCA (and, hence, the CDA too). "... at present, there's a lot of confusion regarding regulations of dietary supplements, ISMs and herbal products and ayurvedic cosmetics, etc. The regulatory policies, rules and guidelines of these products are not clearly defined," states the report.

In the US, such OTC supplements are classified under dietary supplements, in the European Union they come under food supplements and in Japan, they form a special category known as Foods for Specific Health Use. In all these nations, there are clear-cut norms for certification and quality control. In India too, the Mashelkar committee felt there should be separate regulations defining these products, laying down criteria for permissible limits of ingredients, detailing procedures for evaluation of their safety and efficacy.The same approach is mooted for ayurvedic, siddha and unani medicine products.

The CDA would have its offices in most of the state capitals and divided into ten divisions specialising in specific areas. Obviously, it will take time for the country to change to the new system. So, while suggesting that the CDA be established by 2005, the committee felt that a three-stage transition period may be required. While the states with the least manufacturing activity should shift within the first year (2004), those like Maharashtra, Gujarat, Tamil Nadu, Andhra Pradesh, Karnataka and West Bengal, which constitute over 75 per cent of the manufacturing licences, would do so by 2006.

A phased implementation would also give time for states to build an adequate infrastructure to monitor pharma activities. The committee felt that the lack of manpower was particularly responsible for the less-than-satisfactory performance of the state bodies. Currently, there are 19,000 certified manufacturing licencees along with over 4 lakh sales ones. And a total of only 950 drug inspectors to monitor them. Another proposal, say sources, is to appoint a group of officials to act as a special team to investigate the spurious drug trade.

However, the pharma industry seems to be up in arms against the Mashelkar proposals. The objections put forward by various associations against the changes in the licensing policy is on the grounds that the industry is so huge and spread out that it would be impossible for a centralised body to monitor it. Also, since the vigilance, intelligence and enforcement mechanisms will be run by state bodies, there will still be no coordination between the various authorities if central approvals are required on a regular basis.

The actual reason, say sources, is that as long as licensing powers lie with the states, there's scope for corruption. State officials can easily be manipulated by unscrupulous manufacturers. Though the existing Act does have provisions for checking product authenticity, state authorities usually pay scant attention to these. Such a nexus could be broken if licensing were to be centralised. At least, it can be reduced.

Officially, the industry welcomes the recommendations. "It is a comprehensive, well-studied document with special emphasis on the spurious drug problem. Several positive recommendations have been made, like stringent punishment for manufacture and sale of spurious drugs and a separate provision for speedy trial of such offences. Their full implementation will go a long way in boosting public confidence and improving the image of government and industry," says Ajit Dangi, director general, Organisation of Pharmaceutical Producers of India.

But there's a lurking fear that the industry and other vested interests may stall implementation. Admits Karan: "We've proposed the best system possible for India. It is now up to the government. The problem is its scrutiny will be done by people in the ministry who may not be competent enough." His pessimism is not unfounded: many past reports of this nature have been quietly collecting dust. The idea of a national drug authority was previously suggested by the Hathi committee in 1975 and again by the Drug Policies of 1986 and 1994. In 1999, the Pharmaceutical Research and Development Committee suggested a strengthening of the CDSCO to function like a national licensing body. All in vain.

This time too, the diagnosis has been done and the prescription made. The cure will depend upon whether the government is willing to administer the dose.