A Half-Turn In History

Ayodhya created the political Hindu, but couldn’t take it further 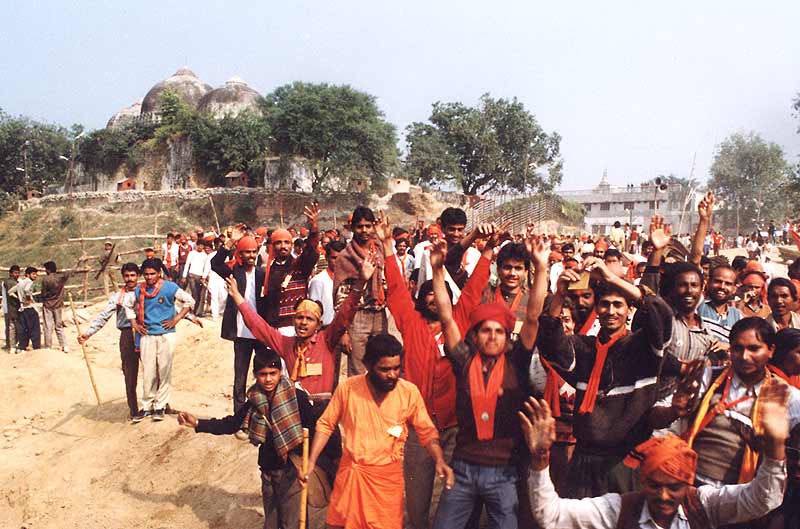 Twenty years after the event, there is a dominant imagery of the demolition of the Babri shrine. Culled through photographs and long-distance video shots of frenzied karsevaks waving triumphantly from the 16th century domes, they convey vignettes of fanatics venting hate. This imagery is reinforced by writings in the English language that tell the story of despair at the assault on India’s syncretic traditions and tearful lamentations over a moment of “national shame”. Indeed, to a generation that has come of age in a glitzy, globalised, made-in-the-media India, ‘Ayodhya’ is often the casual shorthand for a dark past when menacing bigotry ruled the roost and when the “idea of India”—that mother of all cliches—came close to perishing.

There are, however, other imageries of December 6, 1992, that have been subsumed by the prevailing cosmopolitan discourse. In my mind, there is the unforgettable image of the middle-aged man, dripping blood from gashes all over his face and hands, rushing to a disoriented L.K. Advani and, on bended knees, offering him the tiny idol of Ram lalla that had been worshipped at the garbha griha since 1949. There is the meeting with the father of the two Kothari brothers who had been killed during the firing on karsevaks in October 1990, the first occasion when the shrine had been stormed. There is the picture of the group of nattily dressed youth from Andhra Pradesh leaving the venue at dusk chanting, “Ram lalla phir ayenge, bhavya mandir banayenge.”

That’s a promise that is likely to remain unfulfilled, maybe even in their lifetime.  There is a heavily guarded, completely barricaded, makeshift Ram temple that exists on the site. But the many thousands of consecrated bricks collected from all over India in 1989 and the scores of ornate pillars that have been diligently crafted by artisans following a design by the temple architect Chandrakant Sompura are likely to remain in storage at the nearby site for the foreseeable future.

An issue that was simmering locally since Mir Baqi built a mosque in 1528 on a site venerated by the Hindus of Awadh as Ram Janmasthan and which became embroiled in a legal tangle after 1949 when a Ram idol was placed inside the disused shrine isn’t likely to yield any quick solution. On April 26, 1955, the Allahabad High Court had observed that it “is very desirable that a suit of this kind is decided as soon as possible and it is regretted that it remained undecided for four years”. A judgement was finally delivered in September 2010—a 55-year delay—and was predictably sent to the Supreme Court where it festers.

Maybe it was wrong in the first place to expect their lordships to adjudicate on an issue that, whatever else it may be, was never a simple property dispute centred on 2.77 acres of land. Yet, for long years, nervous politicians, unwilling to shoulder the burden of a decision, fell back on a spurious let-the-courts-decide formula. In December 1992, that prevarication proved quite decisive. Had the Allahabad High Court not delayed its decision on the Uttar Pradesh government’s acquisition of the land outside the contentious 2.77 acres by over a year, it is entirely possible that the 16th century shrine would have survived the kar seva of December 6, 1992, and, indeed, many more kar sevas. After all, from December 1949, the Babri Masjid had been functioning as a Ram mandir—a Hindu temple in an unlikely building.

Legal issues were, however, never at the heart of the enormous mobilisation that, in the words of Advani, produced the “greatest mass movement” since 1947. To many, the awesome mobilisation, which began with the Ram shilan pujas of 1989 and became a national issue with Advani’s rath yatra from Ayodhya and climaxed with the December 6 demolition, was all about the reinvention of the Hindu vis-a-vis the ‘other’. In this scheme, righting the wrongs of history and undoing the medieval vandalisation of temples were symbolic of a larger transformation.

Girilal Jain (a former Times of India editor and an intellectual voice of the Ayodhya movement) expressed this churning with characteristic bluntness in January 1993: “The structure as it stood represented an impasse between what Babar represented and what Ram represents. This ambiguity has been characteristic of the Indian state since Independence.... (In) my opinion, no structure symbolised the Indian political order in its ambivalence, ambiguity, indecisiveness and lack of purpose as this structure.... (Its) removal has ended the impasse and marks a new beginning.”

Read today, Girilal’s grand pronouncement may sound hyperbolic but in the surcharged atmosphere after the demolition there was a definite feeling (articulated, among others, by V.S. Naipaul and Nirad C. Chaudhuri) that India was witnessing a great Hindu ‘awakening’. “Hindu ne aaj kamaal kar diya,” gushed Sikander Bakht (the BJP’s most prominent Muslim face at the time) as he embraced colleagues at the party’s Ashoka Road office. In an article, written around that time, I had myself compared December 6 to the fall of the Berlin Wall and the storming of the Bastille.

In the event, history only half-turned. Did we miscalculate? Was the movement, in essence, merely an expression of visceral anger against the ‘other’? And was it purely momentary? Did the Hindu revert to his age-old celebration of ambivalence over certitude?

It is still far too early for definite answers. Yet, assessing the two decades that have lapsed since that fateful December afternoon, certain broad conclusions are in order.

First, the Ayodhya movement had a definite political context. It was nurtured and gained popular acceptance (particularly among the middle classes) in the backdrop of the Khalistani movement, the insurgency in the Kashmir Valley that led to the ethnic cleansing of the Hindus, and Rajiv Gandhi’s reversal of the Shah Bano judgment. Add to this V.P. Singh’s cynical Mandalisation of society and a picture of an India where the Hindus were being taken for granted. Ayodhya threw up a Hindu counter-challenge to divisive politics. Hindus, as a loose and amorphous religious community, predated independent India. Ayodhya created the political Hindu, a community that stretches far beyond those wielding trishuls recklessly and intervening with passionate incoherence on social media.

Finally, the Ayodhya years coincided with the gravest crisis of the ideological consensus forged by Jawaharlal Nehru. The disintegration of the Soviet Union, the rise of radical Islamism in the neighbourhood and the failure of the ‘socialistic’ way to deliver economic growth led to old shibboleths being questioned. Coming in the midst of this uncertainty, Ayodhya pushed the old order over the cliff. Later on, India moved tentatively towards market economics, material prosperity and a more pragmatic relationship with the world. Many of the grievances that had fuelled Hindu anger were tacitly addressed.

At the same time, the Hindu ‘resurgence’ was also marked by a significant failure. While political advances were made, there was a resounding failure to evolve an alternative intellectual tradition that built on the rich inheritance of pre-Nehruvian thought. It is this inability to systematically work towards building a viable counter-establishment that may explain why the optimism and hope created by Ayodhya has largely dissipated. It may also explain why the interpretation of a defining chapter has been left entirely to the ancien regime.

In One Autumnal Face