A Haiku For Rajni

Fly to rainy Hind \ Look for god \ He's not there 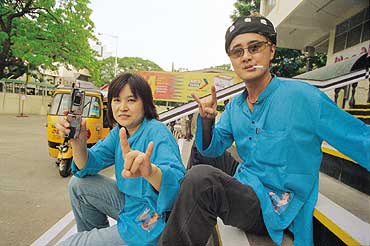 outlookindia.com
-0001-11-30T00:00:00+0553
Following a local newspaper report that some Japanese fans of superstar Rajnikant had landed in Chennai, I knocked on their hotel door, showed my card and communicated in sign language. Takeshi Nakayama simply handed me Ashok's cellphone number and gestured to the effect that having that man around would enable better communication. Ashok Balakrishnan, translator and interpreter, landed in the New Woodlands Hotel lobby in 10 minutes and we followed a circuitous mode of communication.

Takeshi Nakayama, president of the Tokyo Rajnikant Fans Association, has been visiting Chennai since 1998, when he founded the association. Each year he brings a new set of fans. This year, 16-year-old schoolgirl Aoi Miyatake, 44-year-old Kieko Kuwabara (a mother of two), and 21-year-old college student Tomoko Ishii have kept him company. How does he know who wants to come? "I advertise on the fans association website and ask interested people to register."

After a week in Chennai, the foursome was returning home disappointed since they did not manage to get a darshan of their god. "Some say Rajnikant is in the US, someone else says he is in Singapore. His wife Latha said he is in another house," says a confused Takeshi. Stories of fans waiting for days to have Rajni-darshan are part of Tamil folklore. But there was a time when Takeshi did not give up easily. Recalls Ashok, who has become a friend of Takeshi over the years: "When he first came here, I remember seeing tears in his eyes when he repeatedly failed to meet the star. We dissuaded him but he persisted. And one night he came to us with a picture of him being hugged by Rajni at Hotel Chola Sheraton." Ashok adds what he thinks is a sociological insight: "The Japanese are known to achieve what they set their mind on."

And Takeshi's sure one determined man. The 35-year-old who runs an editorial production house in Tokyo has even learnt to flip a cigarette and slip on his coolers in typical Rajni style. "I have even tried bidis." And to compensate for not having met Rajni, the fans visited wife Latha's office and purchased some Baba merchandise. They were all clad in blue and sported bandannas like their hero did in Baba, a movie they are yet to see. Why haven't they tried watching it on DVD/VCD? "No, we want to watch only in theatre. With Japanese subtitles. We will wait," says Takeshi. They might have to wait forever, given that Baba was a phenomenal flop and nobody in Tamil Nadu is wondering where Rajni is or what he is up to. Last heard, he observed a "silent fast" demanding that the rivers in India be linked, much before experts wrote Ganges-long essays in Economic and Political Weekly on the issue. When the Japs were busy looking for him, he was probably bathing in the Godavari Kumbh.

Takeshi has some advice to offer the superstar in whom some people see a future chief minister. He thinks Rajni should not join politics but continue to act in films. "The best part is unlike other Tamil stars who try to play different characters, Rajni plays himself in each film. And only he can."

Large sections of Japan reportedly went Rajni-crazy after watching his 1995 blockbuster Muthu in Japan's theatres with subtitles. The fan club in Tokyo has 5,000 members, says Takeshi. And unlike in Tamil Nadu where association members are mostly male, the Tokyo branch boasts of 75 per cent female membership.

Why is Aoi Miyatake, the schoolgirl, a Rajnikant fan? She thinks hard. Is he sexy? The word rings a bell. Ashok does not have to translate this word. There's apparently no Japanese word for 'sexy' (just like we don't have one for 'reason' as an abstraction). Ashok did not also have to translate 'handsome'. They have borrowed some words from English, he tells me. Aoi has a Rajni poster in her school dormitory and her classmates think she is 'strange'.Kieko Kuwabara, who agrees with Aoi over Rajnikant's sex appeal, has daughters aged 17 and 20 and they think she is 'crazy' to take leave from work and come all the way to Chennai to have darshan of Rajnikant.

Moral of the story: the Japs may have gadgets for everything else, but they don't have sexy in their dictionaries—that's where Rajnikant comes in.