A group that paves the green way to human development 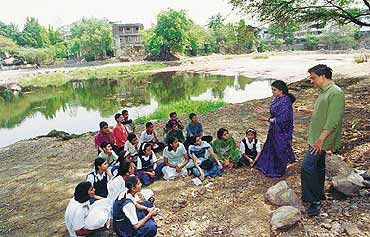 Meera and Arwind Bondre of Pune faced an unusual problem when they wanted to send their son to kindergarten 25 years ago. They found that while there were many organisations catering to the development of mentally and physically handicapped children, there surprisingly weren’t too many such institutions for ‘normal’ kids. So, to fill this vacuum, the couple set up an organisation, Arbutus. The choice of name—from an evergreen variety of strawberry—reflects one of their chief concerns. Arbutus’ aim was to help normal children develop their talents through environmental education. "We think environmental awareness and preservation is the key to development," says Arwind of Arbutus, now registered as an NGO.

For the first 10 years the Bondres held day-long programmes for school children on alternate Saturdays. Later, they changed to weekends and vacations. The first members included their son and a few of his friends. The couple began to write to 30 schools in Pune to send their children for these workshops. Slowly schools started to respond and started sending large groups of even up to 200 children to participate. They would debate, draw, and do skits all day. Today, while there’re 250-300 registered names, the Bondres cannot put a figure to how many children have participated in their programmes.

To teach children about environmental issues Meera, an ecologist by profession, devised her own study material, games and projects. Arbutus also tried to educate citizens through handbills on how even common practices like burning garbage and dried leaves hurt nature. The Bondres discovered that a major hurdle was that adults often sent a wrong message to the child. A teacher say, would teach conservation, but ask a student to start every answer on a fresh page or an indulgent parent would buy loads of crackers on Diwali. So they involved teachers and parents to participate in discussions. It proved effective. Like the time they organised a workshop on air and noise pollution just before Diwali. Several participants did not buy any crackers that Diwali and the rest pooled in to buy just about a fourth of their regular quota.

Arbutus organises two exhibitions a year on children’s work on environment. Typically, they send circulars to schools with a topic and advertise in the local papers. Children can draw, paint, write verse—all of which is exhibited. In ’85, the Bondres linked up friends in Bremen in Germany to start an exchange programme wherein students from both the cities participate and the work is shown in Bremen and Pune.

While Arbutus regularly holds workshops on pollution, renewable energy and vermiculture, it was in the ’80s that the group took on the challenge of protecting one of Pune’s ecological wonders—a 100-year-old freshwater quarry lake. Spread over an acre, this lake in the heart of the city was being eyed by the builder lobby, actively supported by the Pune municipal corporation. Meera, who did her doctoral thesis on the lake and discovered rare life forms there, was determined to not let the lake disappear. In 1985 Arbutus organised an open air laboratory for students and citizens. About 500 children and adults had a hands-on experience of concepts like eco-balance and interdependence of life forms for about for two days and understood why the lake deserved to be recognised as a bioreserve. The public awareness created then has kept the raiders at bay till today.

Earlier, the Bondres funded their own projects, with some outside help. But now, for eight years they’ve been getting financial support from the State Office for Developmental Cooperation of Bremen. Now, as the Maharashtra Board has made environment education compulsory, Arbutus has published a handbook for teachers and students and developed a forum of professionals to evaluate school text books. The Bondres can be contacted at ‘Meghdoot’, Lane 12, Prabhat Road, Pune-4; phone: (020) 05677452.