A Grain Of Good Sense

Legislating against hunger is a great idea that needs expansion 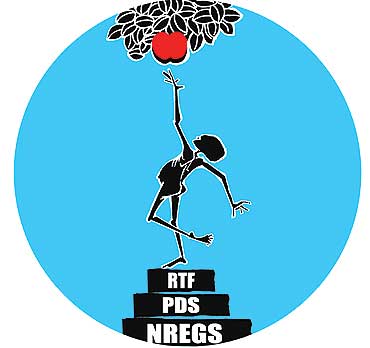 outlookindia.com
-0001-11-30T00:00:00+05:53
The budget reiterates the government’s commitment to a National Food Security Act, known as the ‘right to food’ law. In principle, this is welcome. Our undernutrition levels are among the worst in the world and have barely improved in recent years. Such a law could help focus the nation’s energies on this burning issue.

In India, hunger and malnutrition have deep roots, not only in economic insecurity but also lack of education, gender inequality, social discrimination, skewed property rights and lack of basic amenities. Serious commitment to the right to food would call for action on all these fronts. The proposed act is unlikely to provide a blanket solution but could make a big difference if it takes a broad view of the problem.

It’s especially important not to conflate the proposed act with the Congress promise of 25 kg of grain every month at Rs 3 a kilo for BPL families. Indeed, this happens to be little more than a repackaging of the current BPL entitlements, with less quantity at a lower price. Further, good nutrition depends not only on access to cheap grain but also on other inputs, such as good food, childcare, clean water and breastfeeding support. A serious right to food law should ensure these needs are also addressed.

The NREGS is already a step towards the right to food. However, its implementation is erratic and the principle of "work on demand" is nowhere near being realised. Some families are unable to participate in it because of ill health or old age. This is why the right to food law must include the provision of cheap grain under the PDS beyond the timid promise of "25 kg at Rs 3 per kilo". The current quota of 35 kg per month should not be reduced; ideally, the PDS should be universal in order to avoid the inevitable exclusion errors of any targeted system. But if we go for a targeted system, the selection of BPL families should be transparent and verifiable. And it must cover, say, at least 50 per cent of the population. Some marginalised groups, such as SC/ST families in rural areas, should have BPL cards as a matter of right.

Second, special PDS entitlements are required for the most vulnerable families, including those in which no adult member is able to participate in the labour market. Such entitlements already exist for some such families under the Antyodaya Ann Yojana programme. This programme should be expanded under the proposed act. Another form of social assistance that works relatively well is that of cash pensions—like old age pensions and widow pensions. This is a natural complement to food-based assistance under the Antyodaya programme. An integrated pension programme could form a third pillar of the proposed act.

A fourth crucial component is direct nutritional support for children. Schoolgoing children are already entitled to nutritious mid-day meals under recent orders of the SC; these entitlements should be consolidated under the proposed act, along with provisions for school health services.

Similarly, for younger children, SC orders relating to the ICDS should be incorporated in the right to food law. Under these orders, all children under six years are entitled to all basic ICDS services—nutrition, healthcare and pre-school education. In fact, the SC directed the government to ensure that this happens by December 2008. The finance minister’s statement that the ICDS would be universalised by 2012 is a step backward in this respect. Whatever the budget may have in store for the "aam admi", it’s a damp squib for "aam bacche".

This is a minimum list of interventions that need to be included in the law if it has to have a serious impact on India’s "nutritional emergency". Other provisions to consider are maternity entitlements, breastfeeding support, rehabilitation of severely malnourished children and community kitchens in urban areas. These entitlements must be backed by adequate funds and strong grievance redressal systems. Perhaps this is a tall order. But India has already set an outstanding example of bold social legislation with the NREGS—it can be done again with the right to food act.

(The writer is a development economist.)