A Grain Of Doubt

By banning futures trade in foodgrains, the government is barking up the wrong tree 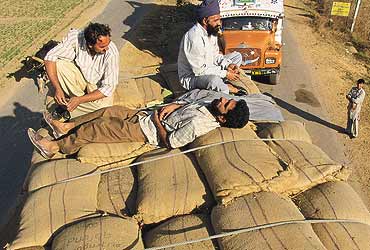 outlookindia.com
-0001-11-30T00:00:00+0553
During his Budget speech, finance minister P. Chidambaram introduced a last-minute paragraph on how the Forward Markets Commission (FMC) had banned futures trading in wheat and rice. Over a month ago, the FMC had banned trading in urad and tur dal and, on February 23, the government said it was setting up an "inflation check cell". The FM was only giving another hint that the government was pretty serious about curbing the price rise in food commodities.

Inflation has become a Damocles' sword hanging over the UPA regime's head. Congress president Sonia Gandhi has blamed the high prices for the party's recent electoral losses in Punjab and Uttarakhand. And the emerging political consensus is that speculation is the main culprit. Therefore, there's a growing pressure to ban futures trading in food commodities. Last week, Union agriculture minister Sharad Pawar said the poultry and starch sectors were demanding a ban on maize futures.

But is speculation in the futures market responsible for the dramatic rise in prices of food products over the past 12 months? Or is the government barking up the wrong tree? "It's just a show to say that the government is taking steps to control inflation," feels Susan Thomas, assistant professor at Mumbai's Indira Gandhi Institute of Development Research. "It is basically posturing for political masters." Agrees C.J. George, MD, Geojit Commodities, "There is no empirical evidence to suggest that futures trading in food commodities leads to inflation."

Before we probe this issue further, let's pause to understand the futures market. Nearly two centuries ago, it evolved as a hedging mechanism for farmers and traders against price fluctuations—due to gluts or crop failures. The farmer could agree to sell, or a trader could agree to buy, the future crop at a specified price. The farmer benefited in case prices fell due to a glut, and the trader was happy in case they rose due to a shortage. Today, it's an instrument for traders to take a call on what's likely to happen in the future.

For decades, experts have discussed the pros and cons of the futures market. While supporters contend it acts as a stabilising factor, critics maintain it leads to speculation. But there is no consensus and the Indian experience proves it. When Outlook compared urad's futures prices in the past year with the government's index that's based on spot prices in mandis, we found that the spot index outpaced the futures', indicating that spot prices were as volatile as those of the futures. Similarly, prior to the ban in rice and wheat, there was no trading in rice futures and very little in the latter.

So, one can't blame futures trading for the rise in spot prices. But the reverse is true in the case of maize, where futures prices spiked by twice as much as the spot ones. Ironically, the regulators and policymakers aren't too sure either about a spot-futures correlation. Admits Madan Sabnavis, chief economist, NCDEX (National Commodity and Derivatives Exchange), "We haven't come across any abnormal volatility." The food secretary, T. Nanda Kumar, says his ministry hasn't even explored the linkage between spot and futures prices.

Many experts feel that there are several other reasons for spot prices to go up. Supply constraints—due to production shortages—is the most important one. For example, tur futures went up because the agriculture ministry estimated a fall in the crop's production. Similarly, urad's global crop wasn't good. "And in India, urad farmers shifted to other crops as they weren't getting a good price. India, in fact, became a net importer," explains Anil Gandhi, owner of trading firm Richa International.

At a futuristic level, climatic changes and monsoon extremities will be the main causes of uncertain crop production. An October 2006 study, commissioned by England's Chancellor of the Exchequer, had warned that declining crop yields "could leave hundreds of millions without the ability to produce or purchase sufficient food." This means macro factors too affect spot prices.

One can't also discount the impact of lobbying to force, or not impose, a ban. For example, even though domestic rubber prices were lower than in global markets, Indian tyre firms (which buy 60 per cent of the local production) successfully urged the rubber board to ban futures trading. However, the government fails to react when prices go down and hurt the farmers. Last year, pepper growers agitated against falling futures prices and, the year before, cardamom planters did the same. In both cases, the farmers failed to convince the regulators to ban forward trading.

Despite these arguments, there may still be a case for those saying that a majority of farmers and wholesalers don't use futures for hedging purposes. Accepts Gandhi, "We have tried futures but there are a lot of intangibles that hinder us." A recent NCDEX-ACNielsen study among 2,000 farmers found that just over a quarter of the respondents cross-checked the futures prices with the spot prices at the local mandis or those offered by the local traders.

The field is therefore open for speculators, most of whom are former equity traders. Still, Geojit's George contends that "the solution does not lie in banning the (futures) products. It lies in widening the participation of stakeholders and creating an efficient physical delivery mechanism". Across commodities, the minimum futures contract size ranges between Rs 50,000 and Rs 8 lakh, and acts as a deterrent for small/medium farmers and wholesalers. Even the NCDEX-ACNielsen survey urged the policymakers to "look for solutions of access for farmers" through lower contract sizes.

One can't forget regulatory problems either which right now don't prevent the entry of speculators in the market. Making out a case for SEBI to take charge of commodities' trading, Ajay Shah, a member of FMC's risk management group, wrote on his blog that "we have a piece of legacy legislation... which places commodity futures with the department of consumer affairs.... Through this, the people who do consumer protection are tasked with thinking about the safety and soundness of clearing corporations (which deal with physical deliveries to close any futures trade)".

The government needs to tackle these issues to ensure forward markets function smoothly. It has to also remove supply constraints and hike production to control prices. A ban on futures merely harks back to a socialist past.

Brown Girl In The Ring