A Gourmet At The Opera

At L'Opera, the one-month old French Bakery in Khan Market, we recommend you follow a simple rule of thumb. Eat cake. 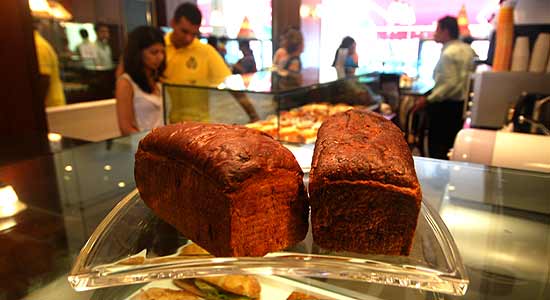 As you salivate your way through the display racks at L’Opera, the recently opened French Bakery in Khan Market, we recommend you follow a simple rule of thumb. Eat cake. Especially if you can’t afford bread. Yes, priced at Rs 100, the baguette is affordable, and some nostalgic Delhi-based French expats are willing to swear by it, but we weren’t too impressed by its consistency; too limp for comfort, the flesh too muggy, the crust not crusty enough. The Grenoblois (Rs 190) was overwhelmingly walnutty and the raisins invisible.

While the Pain de Campagne (Rs 140) was redeeming with its delightful sour-dough flavour, nothing else we ate compared to the gorgeous Raspberry Mille Feuilles (Rs 190); sheets of puff pastry interspersed with layers of raspberry sauce and whipped cream.

The Onion Pizza (Rs 95) and Tomato and Cheese Pizza (Rs 95 a slice), however, were disappointing. The tomatoes especially seemed like they’d been dead for days. The Ham Baguette Sandwich (Rs 290) had a delicious but elusive sliver of ham ensconced within —one bite and it was gone. A notable exception to the unmemorable fare here is the Chicken Quiche (Rs 190).

We’ve been told the croissants (Rs 40) are heavenly, that there’s never one left when we visit is perhaps testimony to this fact. But nothing is as momentary and fleeting as the macaroons. Delectable and perfectly made, as they melt on your tongue and leave behind their almond-pasty goodness, at Rs 130 a piece, they’ll also have left behind a deep hole in your pocket.