From Sarabhai as boss to an espionage case, Nambi Narayanan’s tale is also ISRO’s story 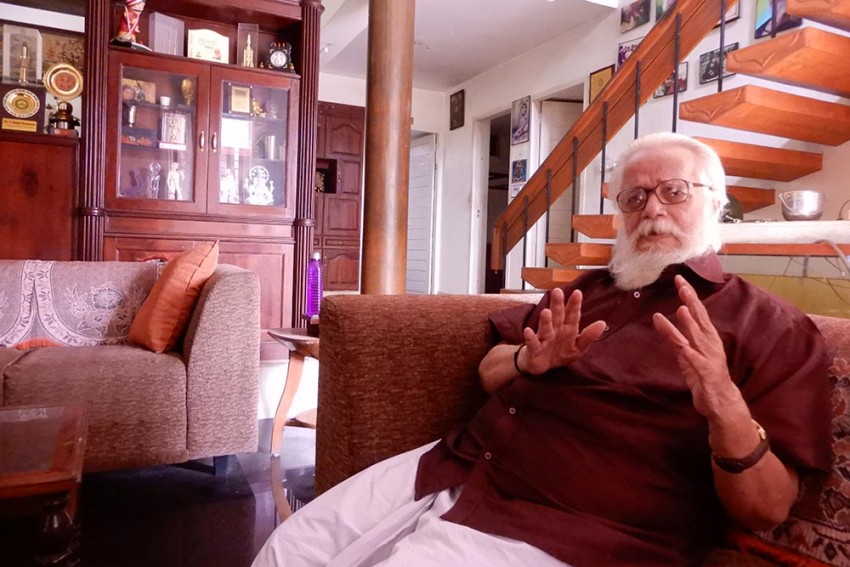 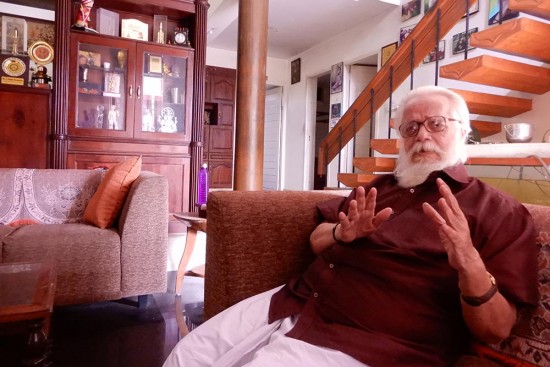 On October 20, 1994, two Maldivian women were arrested by the Kerala Police for overstaying in India. Their phone records showed they had contacted D. Sasikumar of the Indian Space Res­earch Organisation (ISRO), kicking off the biggest spy scandal in Kerala. The suspects were tortured in custody and compelled to name the then Inspector-General of Police Raman Srivastava (who later became Kerala DGP) and ISRO scientist Nambi Narayanan. It was alleged that Srivastava was the kingpin of a spy ring that had deep access to ISRO.

Cut to 1966. The Indian space programme is in its nascent stage. Five scientists under Dr A.P.J. Abdul Kalam crowd around three tables, in an inconspicuous room in the Thumba Equatorial Rocket Launching Station (TERLS) in Kerala. Four years ago, the St Mary Magdalene’s Church, the Bishop House and adjoining properties on the ocean front in Pallithura village were transferred to TERLS for their use. TERLS used to launch sounding rockets then, all acquired from the US and France. Nambi Narayanan, a 24-year-old fresh out of engineering college, is working on the drafting board when a handsome man in kurta-pyjama and kolhapuri chappals walks into the room and sits opposite him.

Narayanan is clueless about the person’s identity, but answers him politely. A payload integrator, Narayanan exp­lains the drawings of the bolt explosive he is working on, while the visitor, with a magnetic personality and the looks of a filmstar, keenly listens. Narayanan cannot contain his curiosity and finally blurts out, “Sir, what’s your name?” “They call me Vikram,” comes the ­reply. That is Narayanan’s first encounter with Vikram A. Sarabhai—“father of the Indian space programme”, chairman of TERLS and the Space and Science Technology Centre (SSTC) as well as director of the Bhabha Atomic Research Centre (BARC). On his next visit, Sarabhai checks on Narayanan’s progress and is happy with the result.

Speaking with Outlook, Narayanan, now 76 years old, says it was because of Sarabhai that India could enter the space world despite being a Third World country. An astrophysicist from Mass­achusetts Institute of Technology, Sarabhai had extensive contacts in the US, the erstwhile USSR, France and Japan, which he used to access technological knowledge. It’s ­common lore that he was only a phone call away from NASA deputy director Arnold Frutkin.

It is to Sarabhai’s vision that the freedom to experiment and innovate at ISRO is still attributed—a legacy that sets the space agency apart from the lethargy of other government organisations. Sarabhai created the infrastructure for solid propulsion rockets and did the spade work for the organisation. The fabrication was indigenous and the payload came from the Physical Research Laboratory, Ahmedabad. It wasn’t just rockets and satellites, missiles were his thing too.

Sarabhai wanted the best in his organisations, so he recruited highly qualified professionals to SSTC and gave them the space to grow. Narayanan knew he must study further if he had to match their qualifications. He began to attend MTech classes at the College of Engineering, Thiruvananthapuram. When Sarabhai heard of this, he offered him leave for higher education in case he got into an Ivy League institution in the US. That’s how Narayanan landed up at Princeton University in 1969, on a NASA fellowship to do his Master’s in chemical rocket propulsion under Professor Luigi Crocco, who was known for his analysis of “combustion instability”. Narayanan completed his Master’s in a record time of 10 months and was offered a job in the US. He declined, heeding Sarabhai’s call to return to India. While Indian rocketry then was solely dependent on solid propulsion, Narayanan had come back with expertise in liquid propulsion.

“Sarabhai would always introduce me as ‘our Princetonian’,” he recalls. “He was as proud of me as my own father would be. I impressed upon him that the future of space technology was in liquid and cryogenic propulsion.” Sarabhai, though, could not see this future take shape as he died in his sleep on Dec­ember 30, 1971, aged just 52. It was a huge loss for the Indian space programme. Later, the SSTC at Thiruvananthapuram was renamed as Vikram Sarabhai Space Centre.

Nambi Narayanan now 76, was arrested in 1994 and accused of selling cryogenic ­technology to an “enemy country”.... He was reinstated in 1996 after the CBI found it to be a fabricated case.

It was when Satish Dhawan took over as ISRO chairman that Narayanan could make some headway in his dream project. Dhawan had several engineering degrees, a PhD from Caltech and also a Master’s in English literature under his belt. “He was brilliant and articulate,” says Narayanan. “His lectures always saw a full house. His lecture on birds is perhaps the best anyone has heard. He laid down meticulously the blueprint for the Indian space programme and gave the numerous organisations started by Sarabhai a goal and direction. He configured the SLV-3, ASLV (Augmented Satellite Launch Vehicle), PSLV (Polar Satellite Launch Vehicle) and GSLV (Geosynchronous Satellite Launch Vehicle). When Dhawan took over, rocketry here was all about solid propulsion. I managed to convince him about the future of liquid propulsion. It was finally in 1974 that I was made project director and a team of 53 scientists was formed. We were sent to Societe Européenne de Propulsion (SEP) in France under an agreement for joint development of the Viking engine. There was no cash transfer; it was a barter deal where we would provide manpower. Money was a big constraint those days. And here we were getting the knowledge absolutely free.”

In early 1978, Narayanan and his team returned, armed with the liquid propulsion technology, all excited about changing the trajectory of the space programme. They were surprised by the stiff opposition they faced within ISRO, which seemed to be uninterested in any fuel other than solid, or in conquering the geosynchronous space—36,000 km from the earth. Besides, there was no money to invest in something the majority was unsure of.  Narayanan was on a sinking ship. Tired with the lackadaisical attitude, his team wanted the unit to be disintegrated, so they could join their respective parent divisions.

In 1979, Dhawan sanctioned around Rs 10 lakh for Narayanan to build a model of the liquid propulsion engine. Narayanan would call it Vikas—an acronym for Vikram A. Sarabhai as well as a word meaning development. For a long time, however, there was no progress until Dhawan saw the model and allotted Rs 1 crore to build the Vikas engine. Then came the next problem: testing is a mandatory requirement before any rocket is launched, but India did not have a testing facility. Another waiting period seemed inevitable.

Meanwhile, in 1984, U.R. Rao took over as ISRO chairman and went on to execute the plans laid down by his predecessors. “To build a testing facility would cost Rs 100 crore, so it was decided to take the Vikas engine to SEP, France, to test it,” says Narayanan. “In December 1985, we packed the engine in 14 boxes, which were flown by Air India to France. When we landed, three vital boxes were missing. Those had gone to Copenhagen. It was a very tense time because we had spares only for a few parts. Eventually, on December 12, the Vikas engine was tested successfully.”

The contours of the PSLV design began to take shape, in which the second and fourth stages are based on the liquid propulsion system. Seventeen years after India accessed the liquid propulsion technology, the PSLV was first launched on September 20, 1993. Although a snag developed in the third stage and it failed to reach the orbit, the Vikas liquid engine performed well and the PSLV was successfully tested the following year. Today, the Vikas engine is on every rocket that India launches, whether it is PSLV, Chandrayaan, Mangalyaan or the GSLV.

ISRO had signed a deal with Russian space agency Glavkosmos in 1993 for the transfer of cryogenic technology. The US and France had also bid for it, but ISRO preferred the cheaper Russian bid. The US later objected, citing the Missile Technology Control Regime (MTCR) agreement, even though no country uses cryogenic technology for missiles. India was on the threshold of acquiring the technology, which would help reduce the cost of putting satellites in geosynchronous orbit, and joining the oligopoly guarded by a few nations, but Russia, a signatory of MTCR, was forced to abide with it and the deal fell through. That’s when ISRO found a way of circumventing the MTCR. A new deal was signed with Glavkosmos, which would give the cryo-engines without transferring the technology.

It was in November 1994, when Narayanan was scaling the heights of indigenous rocket technology, that he was hit by a bolt from the blue. He found himself suddenly accused of selling cryogenic technology to an “enemy country” through two semi-literate Maldivian women whom he had never met in his life—and though India was yet to access cryogenic rocket technology then, nor had ISRO filed a police complaint for the missing documents that were allegedly handed over to the spies.. Narayanan was tortured for 50 days in custody. Intelligence Bureau (IB) officials even confiscated PSLV souvenirs found in a suspect’s house, taking them to be secret models.

In its closure report of 1996, the CBI found the case to be fabricated. The investigation agency submitted two reports—one to the Centre and the other to the state government—asking them to take action against the IB officers and the Kerala Police officers, respectively. In 2004, the Centre closed that case abruptly without any inquiry and, in 2011, the Kerala government ordered that no action should be taken. Narayanan challenged the state government’s order before a single-judge bench of the Kerala High Court, which decided in his favour, but Siby Mathew, the investigating officer, went for an appeal and a larger division bench favoured him. Narayanan has now app­ealed in the Supreme Court.

Narayanan was reinstated in ISRO in 1996, but the spy scandal had thwarted all prospects of space advancement for a while. It had eroded the confidence of the scientists. In an open letter to editors, former ISRO chairmen Dhawan and Rao, along with other technocrats, explained how it was impossible to learn rocketry through documents. They said no documents in ISRO are classified as secret or top secret, and all scientists are free to go to the documentation cell to study any document. The letter drew attention to the fact that even after the CBI had absolved Narayanan and Sasikumar of all charges and declared the spy case as fabricated, the scientists and their families continued to be hounded by the Kerala Police and the media.

Ironically, it took more than two decades for Indian scientists to master the cryogenic technology. GSLV Mark III flew only this year, on June 5, though there was a plan to launch it in 2000. India lost two decades in technological advancement in several fields.

In 2001, the National Human Rights Commission, then headed by retired Supreme Court judge Justice J.S. Verma, ordered the Kerala government to pay Rs 10 lakh as immediate interim relief. Narayanan received it in 2012. The architect of the Vikas engine and the initiator of the cryogenic engine still awaits his full compensation—and justice.

By Minu Ittyipe in Thiruvananthapuram