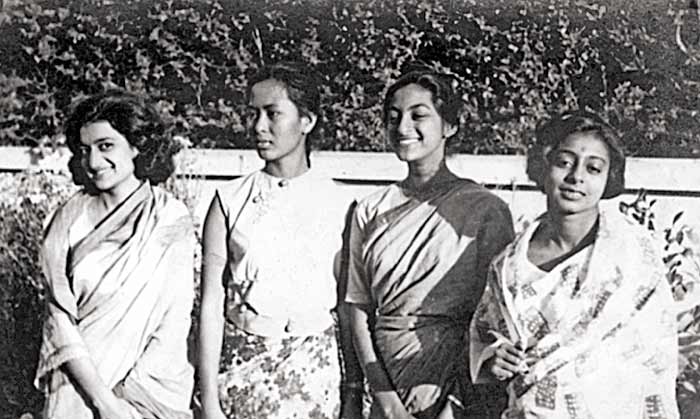 When a childhood friend is the face of a movement for democracy in a country ruled by a junta, time can only partially dim, not ever erase, one’s memories of her. Among other things, I remember Aung San Suu Kyi’s ready wit. Some years ago, I chanced upon a picture postcard from her marked “Oxford, 1979”. “Doesn’t the gargoyle on the New College bell tower look like Mr X?” she’d asked, referring to an Economics don, her tutor who’d been quite taken by her Oriental charm. I could almost hear her giggle; she saw humour in things we found quotidian. The quality surely emboldened her in the dark years.

As schoolgirls at Delhi’s Convent of Jesus and Mary in the last years of the Nehruvian era, we were ingenues, sheltered from the real world. Suu’s mother, the gracious Daw Khin Kyi (Madame Aung San), Burma’s ambassador to India at the time, would brook no indiscipline. Sloppiness or slouching was out. For habitual loungers to whom divans with bolsters signified ultimate bliss, Suu’s upright posture was a constant reminder of how young ladies should conduct themselves. Of course, the strict regimen of a convent with its insistence on well-starched divided skirts (what if ordinary skirts billowed in the wind?) just that one inch above the knees, Angelus at noon and learning by rote only reinforced familial values of discipline and order.

A schoolgirl at Delhi’s Convent of Jesus and Mary, Suu Kyi was an ingenue. An exemplar of the ‘proper’ lady.

Some of our illusions about the world gave way to the lessons of realpolitik when we went on to study Political Science at Lady Shri Ram College. Interestingly, the syllabus had little on Indian political thought (nothing by Gandhi for instance), but focused on Rousseau’s ideals of childhood and Hobbes’ Leviathan. Notions of liberty and freedom via Locke and Hume made their way to our receptive minds—still revelling in having escaped from the shackles of a convent. It mattered little to us that an Indian women’s college in the 1960s meant incarceration of another kind, though I do recall many arguments with the authorities over why the college gates had to be so securely locked! It was this acceptance that led to us playing male roles in college productions—there was no question of boys being invited to participate. Thus, for the witty spoof that Suu wrote on Antony and Cleopatra, she was a handsome Mark Antony, her attire fashioned out of someone’s mother’s precious chiffon sari. Debates (Suu was president of the debating society), plays and activating the students’ union enthused us and we were lucky to have a group of teachers who thoroughly approved of our varied interests and attempts at innovative tutorials.

Thinking back, Suu’s political science training—we went on to read Politics, Philosophy and Economics at Oxford—could only have helped hone her later skills. When, after years of marriage, motherhood and domesticity, her life changed irrevocably, Suu must have relied heavily on her innate resources. Nocturnal coffee sessions on the implications of Machiavelli’s Il Principe, lodged safely in her sprightly mind, were surely often dredged up as she sought to understand the ways of despots and grapple with a world so alien to her upbringing and sensibilities.