A Girl, A Basketball, A Stone 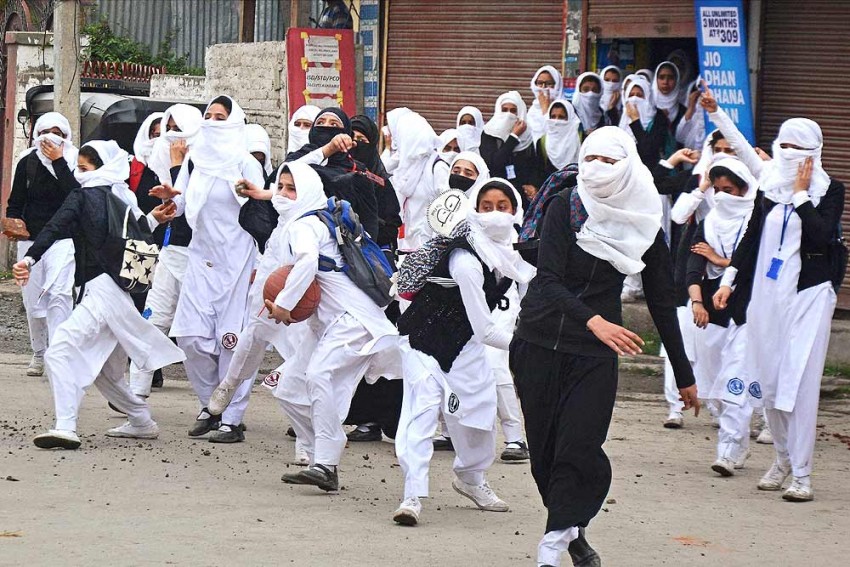 No Child’s Play
The ‘basketball girl’ and other students near Lal Chowk
Photograph by PTI
Naseer Ganai April 28, 2017 00:00 IST A Girl, A Basketball, A Stone 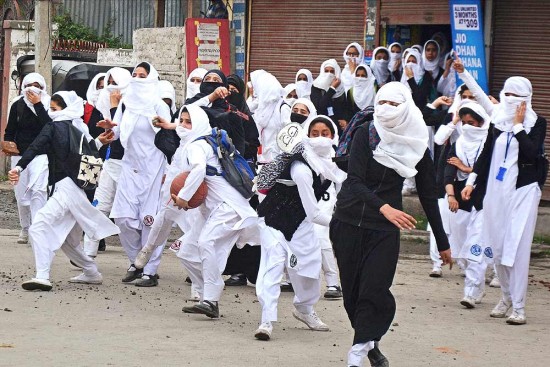 A girl student with a basketball in her left hand and a stone in the right rushes forward to hurl the stone at Jammu and Kashmir Police personnel and then, just moments later, is seen among a group of girls kicking an armoured vehicle in the heart of Srinagar, Jammu and Kashmir’s summer capital. She doesn’t drop the basketball, holding it close to the chest all the while.

Now picture this: A male student injured during the protest is lying uncon­scious on the road—smack in the middle of the virtual “no man’s land” between stone-pelting students and a huge contingent of police personnel in full riot gear. A group of fellow students charge forward to rescue him. They shout Azadi slogans, vent their rage in the choicest abuses they can think of and let loose a volley of stones on the riot police, forcing them to ­retreat a few metres. Like soldiers in a war, they move the injured away from the thick of the street battle.

And this: A girl student with a backpack and in a tight checkered salwar has her face covered with a blue scarf, for protection against teargas and to avoid identification by the police. She sprints towards the police with a brickbat in one hand and a stone in the other, then pau­ses to take aim before hurling both.

A large number of such images—­“unprecedented and disturbing,” acc­ording to police sources—have been circulating on social media platforms, with some making it to the mass ­media as well. These are now the defining ima­ges of the current phase of stone-­pelting in Kashmir.

On Monday, April 24, colleges and the higher secondary schools re-opened a few days after they were closed follow­ing protests by students across the Valley against the use of police force on students of the Degree College in Pulwama on April 15. That morning, acc­ording to the authorities at Srinagar’s Sri Pratap (SP) College—one of the oldest colleges in Kashmir—it was “business as ­usual” at the M.A. Road campus near Lal Chowk, the heart of the city. This campus has seen increased activ­ity since it was made the campus of the Cluster University formed by an Act of the state government last year.

Only a brick wall separates SP Coll­ege from the Government College for ­Women, another of the best-known colleges in the state. That wall was knocked down by students from both colleges, who came together and joined students of the Government Girls’ Higher Secondary School, Kothibagh, just behind the women’s college—in protests that surprised the authorities and generated images that changed the visual profile of the Kashmir unrest in the media.

The students first marched inside the SP College campus. Some professors ­insisted the students should attend classes, but, as a professor at SP College puts it, “they mocked at us” and star­ted moving towards the street outside. Students of the women’s college, in fact, asked their professors to join the ­protests. “They called us gupan (cattle) and said they won’t tolerate suppression,” recalls a professor.

Once outside, at around 11 am, say ­police sources, the students threw stones at the nearby traffic police chowki and, within two hours, they had taken over all of M.A. Road, right up to the Lal Chowk, showering the police with stones and brickbats. The shopkeepers downed their shutters to protect their shops.

Four of the students who were at the forefront during the first hour of stone-pelting were taken into custody, say police sources. “But, after sometime, everyone joined the students, including habitual stone-pelters, and then it was free for all,” says a senior police official posted in the area. There were num­erous scenes of students chasing arm­oured vehicles down M.A. Road, while the police aimed coloured water at the students and fired teargas shells. Nothing could make the students retreat.

“Our brothers are being killed and blinded. How can we be silent?” asks a student of the Government College for Women, M.A. Road.

In the midst of relentless stone-­pelting, two or three boys started hitting an armoured vehicle with wooden sticks. A few protesters—police sources claim they were not students—climbed onto the roof of an armoured vehicle and tried smashing it down with brickbats. Some protesters stood on the bonnets of armoured vehicles with ­officials and policemen inside, and tried to smash the windscreens and the ­front-door glass with long sticks. Srinagar SSP Imtiyaz Ismail Parray and DSP Amran Farooq were among the 22 ­policemen who were injured.

The students raised Azadi slogans, with some of them hailing Pakistan as well, and then, say police sources, the “habitual stone-pelters” also joined them, hurling abuses at the police along with stones. A policeman claims to have seen one person “waving a black flag”. The police associate black flags with ISIS, but many Kashmiris associate it with the Islam religion.

As the posh M.A Road, Lal Chowk and Regal Chowk turned into a battleground, local shopkeepers say it was first time in the history of the Kashmir insurgency that stones were hurled at the Kothibagh police station. How­ever, police officers at the station, who were responsible for dealing with the protest, try to play it down. “In three ­educational institutions with a total strength of 15,000, if only 300 students take part in the stone-pelting protest, it is no big issue,” says a senior official, who believes the police did not allow the protest to escalate by taking care not to fire bullets or pellets at the protesters. “This shows that any protest, no matter how ferocious and big, can be managed without killing protesters. It is only when protesters are killed that the protests get prolonged and spiral out of control.”

At the Unified Command Head­quarters meeting held in Srinagar on Wednesday, say sources, CM Mehbo­oba Mufti asked the forces to curb the student protests while exercising restraint in dealing with protesters.

Police sources say they expect student protests to recur and don’t rule out the role of separatist organisations in inciting the Monday protests. According to a senior official, the banned Kashmir University Students’ Union (KUSU) couldn’t be behind it as it doesn’t have the kind of “command over students that could create such havoc”. PDP leader and MLC Firdous Tak says, “We are aware that certain forces will try to stage large-scale student protests and we will nail the conspiracy behind it.”

DGP Shesh Paul Vaid says the police are trying to identify the “instigator behind the student protests. “The students want to study, but some outsiders are involved and they are being identified,” says Vaid.

Indeed, the police were quite surprised on seeing large numbers of girls in their teens and early 20s pelting stones at them. A professor says she also saw girls collecting stones and brickbats for those who were at the front. The scenes at Lal Chowk were emblematic of Kashmir’s current political scenario, which is yet to heal from the scars of last year, when around 90 protesters were killed by government forces during six months of agitation.

“We protest in the streets because we want to make a point—all is not well in Kashmir,” says a student of the women’s college on M.A. Road. “We, too, have political aspirations. Our brothers are being killed and blinded. How can we be silent?” During an earlier protest on April 17, Iqra Sidiq, a 19-year-old ­undergraduate student at the Government College for Women at Nawakadal, Srinagar, was hospitalised with a serious head injuries caused by a stone allegedly pelted by CRPF personnel.

KUSU had earlier called for a protest against “the assault on students” at the Degree College in Pulwama, but there was no call for protests on Monday. In fact, KUSU requested the students to return to their classes, but the students defied it and took their protest to the streets. With no one apparently leading the students, the government has a new problem on its hands: who can it talk to? “This is leading to anarchy,” says a senior PDP leader.