A Gavel In The Voting Ring 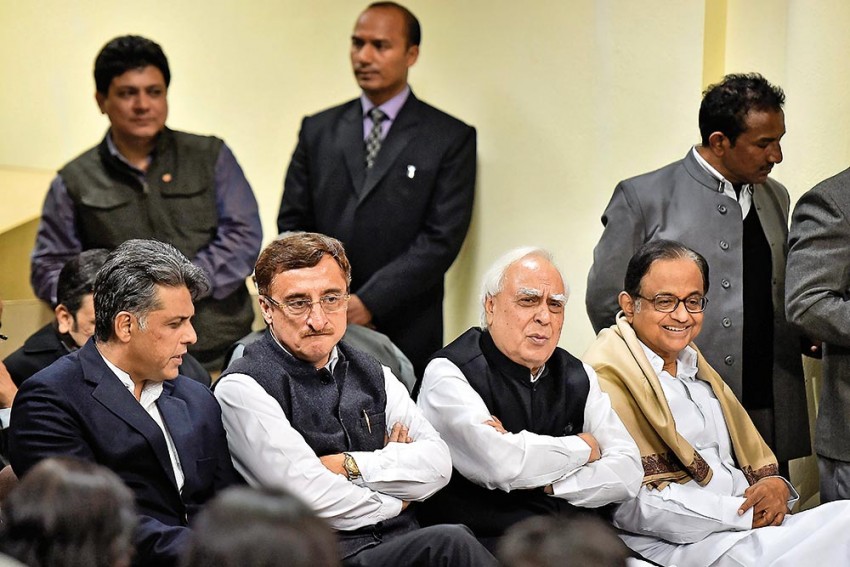 Carpe Diem
A Congress press conference after the one by the Supreme Court judges
Photograph by PTI
Bhavna Vij-Aurora January 19, 2018 00:00 IST A Gavel In The Voting Ring 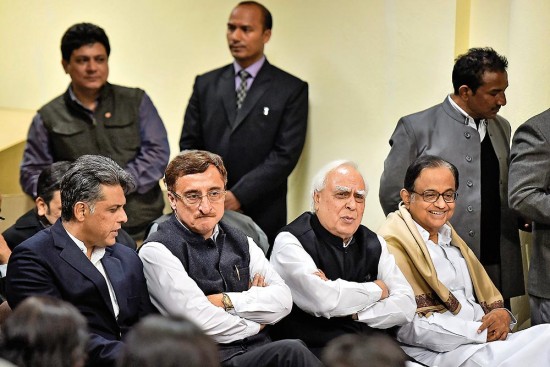 A portrait of Justice Hans Raj Khanna hangs in Court No. 2 of the Supreme Court—the same that Justice Jasti Chelameswar now occupies. In 1976, at the height of Emergency imposed by the then prime minister Indira Gandhi, the legendary Justice Khanna was the sole dissenting voice on a five-­member bench as he went against her in a case involving civil liberties. “What is at stake is the rule of law,” he had observed. “The question is whether the law speaking through the authority of the court shall be absolutely silenced and rendered mute.” This is believed to have cost him his promotion to Court No. 1, that of the Chief Justice of India.

Forty-two years later, Justice Chelameswar, flanked by three other seniormost judges Justices Ranjan Gogoi, Madan Lokur and Kurien Joseph—occupying courts 3, 4 and 5 respectiv­ely—pointed out that “things are not in order” in the top court and that democracy is in danger. He claimed that the four of them didn’t want wise men to say, 20 years from now, they had “sold their souls and didn’t do the right thing by our Constitution.” Highly critical of Chief Justice of India Dipak Misra, they said they had failed to persuade him to take “remedial measures” on issues affecting the institution.

“If the government tries to resolve the problem, it will be seen as interference in the judiciary,” says a senior government functionary.

While it is difficult to speculate on the denouement of the unprecedented move by the four Supreme Court judges, the political landscape of Lutyens’ Delhi is abuzz with conspiracy theories. Were the judges instigated by elements perceived to be anti-government, including a prominent journalist present at the press conference held at Justice Chelameswar’s sprawling 4, Tughlaq Road bungalow? The presence of senior lawyer Indira Jaising, who served as additional solicitor general during UPA regime, also raised eyebrows.

The timing of the press conference itself was questioned since it was the same day, on January 12, that the PIL demanding an inquiry into Justice B.H. Loya’s death was to be heard in the court of Justice Arun Mishra, 10th in the pecking order of 25 judges. The four concerned judges had raised questions about what they termed the “selective” allocation of cases by the Chief Justice. They said their grievance about allocation included the Justice Loya case, which incidentally was filed by Tehseen Poonawalla, who describes himself as a “political trendwatcher” and regularly appears on TV debates to defend the Congress viewpoint. He is also Robert Vadra’s brother-in-law.

When he died in 2014, Justice Loya was presiding over the Sohrabuddin Sheikh extra-judicial killing case in which BJP president Amit Shah was an accused. Seizing the opportunity created by the judges’ unprecedented press conference, newly anointed Congress president Rahul Gandhi reiterated there is a “threat to democracy” in India and demanded a Supreme Court-monitored investigation into Justice Loya’s death. Rahul had a long meeting with the lawyers in his party, including Kapil Sibal, P. Chidambaram and Manish Tewari, before he raised the issue.

“In such a backdrop, and what in legal terms can be viewed as circumstantial evidence, how can anyone have any doubt that the entire drama is not politically motivated?” asks a senior BJP leader. “There is no need for us to react. The people behind the theatrics are exposing themselves. It is a desperate attempt by certain people to try and show the Modi government in a bad light.” Photograph by PTI
The Justice Loya case could play a ­central role in the 2019 Lok Sabha election if it ­remains unresolved.

While the government has decided to take the “no comment” and “no interference” stand, party spokesperson Sambit Patra accuses the Congress of unnecessarily politicising the issue. “It’s an internal matter of the Supreme Court,” Patra tells Outlook. “The Congress is looking for opportunities where it should not. The judiciary cannot be dragged into politics, and issues pending in the court should not be discussed in public. The Congress should not indulge in politics over such a sensitive matter.”

It was at a meeting with law minister Ravi Shankar Prasad and minister of state P.P. Chaudhary, soon after the judges’ press conference, that the decision to stay out of the issue at the government level was taken by Prime ­Minster Narendra Modi. They made it clear that the government will not intervene and that the judiciary is independent, capable of resolving the issue itself. “If the government tries to resolve the problem, it will be seen as interference in the judiciary,” says a senior government functionary, who did not wish to be named. “There is no institutional framework whereby the government can come in. The attorney general (K.K. Venugopal) is the government representative and he is on top of the situation.” According to sources, Venugopal is in touch with the Supreme Court judges on both sides of the divide and working at an amicable solution. “He is encouraging both sides to engage with each other and resolve the matter,” the official confirms. “It’s unlikely to be an easy process as the four judges seem to be in no mood to back off. The Chief Justice is being nudged to find a way to resolve the issues raised by them. Let’s hope it happens soon.”

Senior lawyer and Rajya ­Sabha MP K.T.S. Tulsi, however, believes the four judges have “escalated the matter” so much that they cannot back down now. “They have raised issues leading to a crisis of the Chief Justice’s legitim­acy,” Tulsi tells Outlook. “The matter must be taken to its logical conclusion. If the judges have evidence, they must produce it. There must be proper proceedings as provided by the Constitution.”

Sources close to the four judges claim it is unfortunate that the entire matter has taken a political hue. “That was not the intention,” says a source, requesting anonymity. “The judges never wanted it to be politicised. Their intention was only to highlight the administrative side of the judiciary and the need for reforms.” Another source insists it was an impromptu press conference, not organised at the behest of any vested interests. “Presence of any person at the press conference does not mean more than what is apparent,” he says. “The judges may have asked some known journalists to help spread the word about the impending press conference. That is about all. There are no motives.”

Justice Gogoi is next in line to be the Chief Justice. Will the press conference, being seen as an open rebellion in certain quarters in the government, affect his chances to be the next occupant of Court No. 1?

“Not really,” says a BJP office-bearer. “The government cannot afford to take on the ­judiciary at this stage. Chief Justice Dipak ­Misra will retire in October. It will be close to the Lok Sabha election and the government would not like to upset anything just then. Anyway, after Justice Gogoi, there are Justi­ces Lokur and Joseph in the order of senior­ity—all part of the press conference. All of them just can’t be overlooked. Also, law minister Prasad talks about the excesses of the Emergency, criticising Indira Gandhi at so many public ­forums. The government cannot be seen as being unfair and arbitrary where the judiciary is concerned.”

So, as things stand as we go to press, the government is taking a tempered position on the matter. That could be because it knows very well that the Justice Loya case could play a central role in the 2019 Lok Sabha election if it remains unresolved. That is the last thing it needs.