The AIADMK’s obits are being written again, 29 years after MGR’s death. The party survived the last time, but can it repeat the feat? 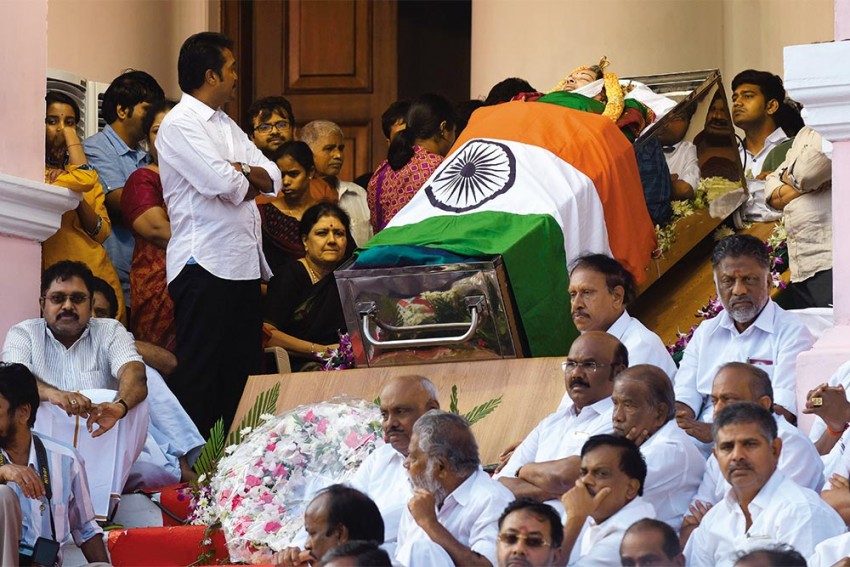 Now
Sasikala sitting on one side of Jayalalitha’s body, Panneerselvam on the other, at Rajaji Hall, Chennai, on December 6, 2016
Photograph by Getty Images 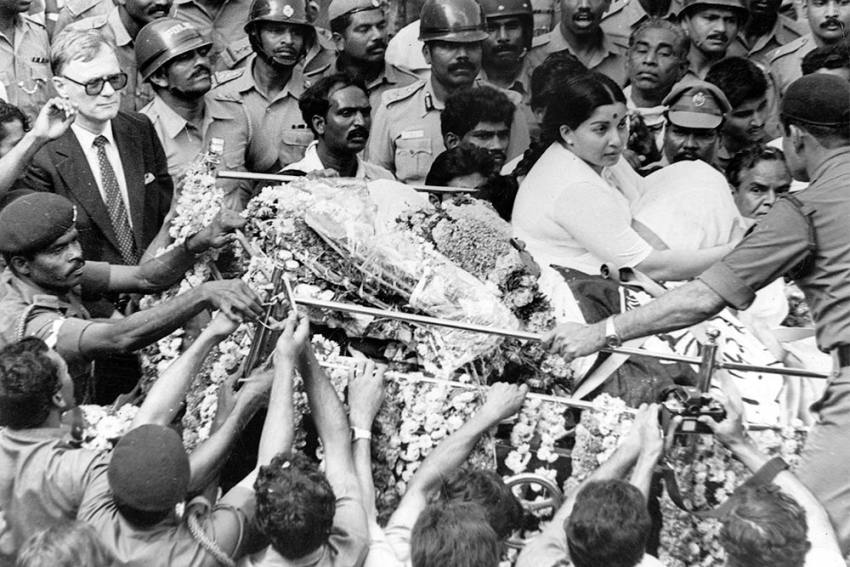 Then
Jayalalitha being pushed off the ­carriage carrying MGR’s body to his funeral after his death on December 24, 1987 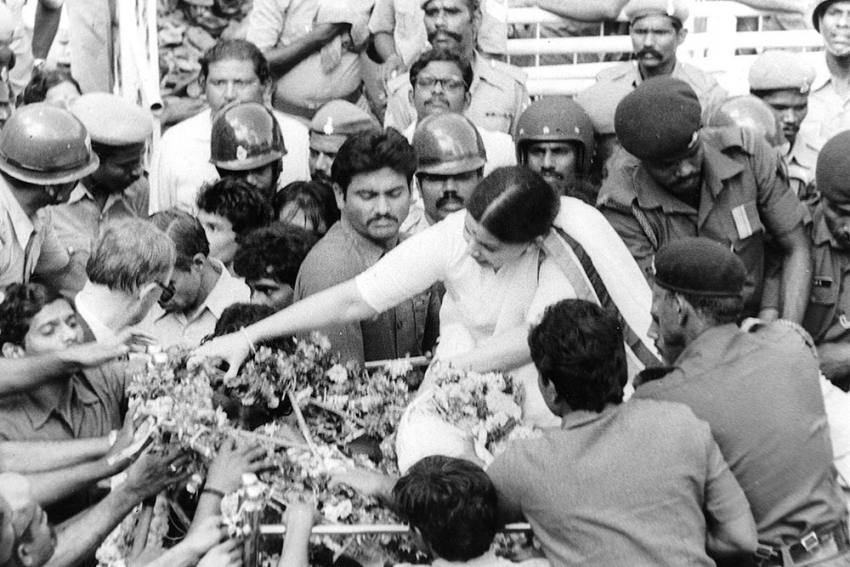 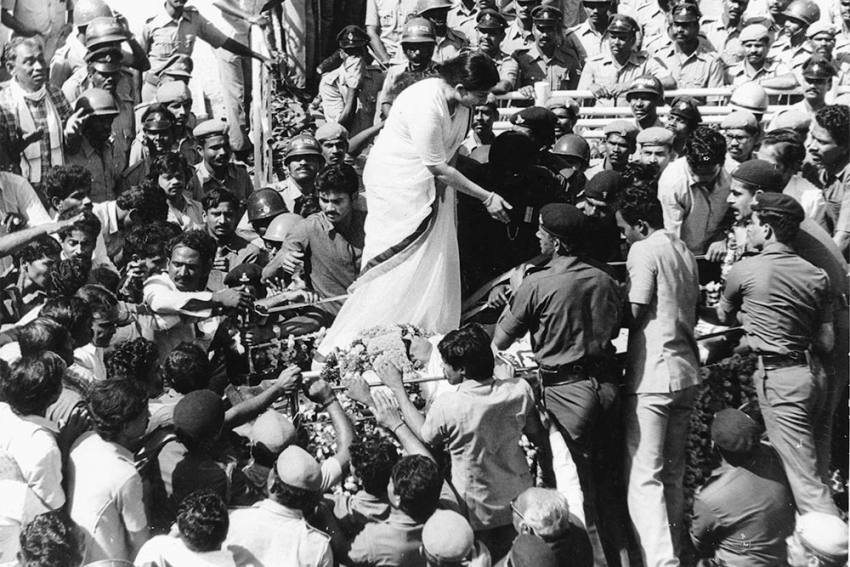 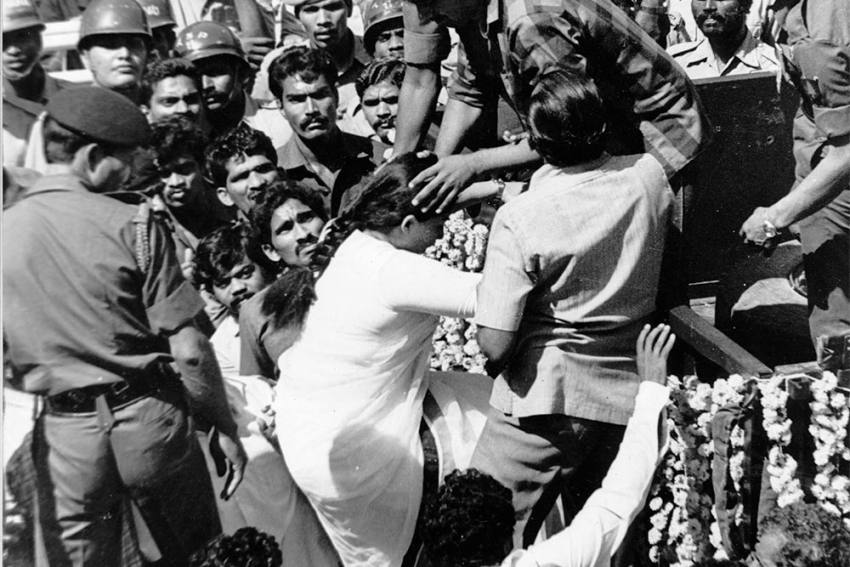 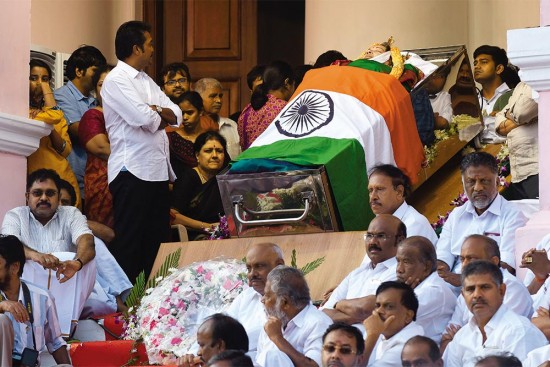 Watching J. Jayalalitha’s last jou­rney was nothing short of deja vu! Twenty-nine years ago, the body of her mentor M.G. Rama­chandran (MGR) was kept for public view at the same heritage venue of Rajaji Hall in Chennai. The last ­journey, then too, had headed to the same venue on Mar­ina beach nearby. The milling crowds were no different either. Men and women from the ­lowest strata of Tamil society, most of them silently ­weeping and several crying aloud, bidding farewell to their demigods.

In 1987, when MGR died, most of the media wrote the funeral notes for the party he foun­ded. He did not name a successor for the posts he held in the party and the government. There was no second line leadership in the AIADMK ­comparable to the next big party, the DMK. And, more particularly, the media then thought there was no one to match MGR’s charisma and mass appeal from within the AIADMK. “After him, the deluge!” was the verdict of the media then.

There were factions within the AIADMK that tried to destroy each other and political analysts felt that would mean the total destruction of the party. But the leader of one of the factions, Jayalalitha, proved them wrong. She showed she could not be dismissed as just a popular face MGR dep­loyed to carry on with propaganda and campaign when he could not tour the state due to his illness.

She also proved her enemies in the party wrong—those who had calculated that MGR’s wife V.N. ­Janaki would evoke more sympathy from his ­admirers and loyalists than his erstwhile ­romantic co-star. In the 1989 assembly election, the ­AIA­DMK saw a rise in the number of votes, but the split ­between the two factions helped the DMK capture power after 13 years. Of the two ­AIADMK factions, Jayalalitha’s was the one that bagged more votes. The other side understood that their collective ­future depended only on ­accepting her leadership and surrendered with a merger. Janaki retired from politics and, after the 1991 election, Jayalalitha, then 43, was crowned the youngest chief minister of Tamil Nadu. And she remained chief minister for more than 14 of the 25 years that followed, creating a record of winning ­consecutively in the 2011 and 2016 assembly elections. With four and half years of her term still left, she triggered through her death another funeral and another debate on the future of her party.

Like MGR, she had not named or indicated any successor to the posts she held. And pundits have already started predicting that the AIADMK would disintegrate soon without a popular face to lead it anymore. And yet, strangely, the transition this time was smooth. Within hours of Jayalalitha being declared dead, a new chief minister has been sworn in. There is no faction fighting visibly. In 1987, the fight was visible and out in the open. Jayalalitha was treated as an unwanted visitor at Rajaji Hall, where MGR’s body was kept. Janaki’s supporters, led by R.M. Veerappan, tried to prevent her from coming near. She defied them, took a position near MGR’s head and glued herself there for hours. She was pricked with pins from behind, but she would not relent. And when the body was taken to the military carriage, she managed to climb on it, but was literally pushed off and had to return home to avoid more manhandling.

But 2016 is different. Where Jayalalitha stood in 1987, this time there was no rival contender. The only person of power to stand beside her body was V.K. Sasikala, her foster sister and companion of 35 years. Surrounding the body stood Sasikala’s blood relatives, some of them shunned and given the cold shoulder by Jayalalitha earlier. The newly sworn-in chief minister O. Panneerselvam and other ministers and party MLAs were standing or sitting on the flight of stairs below. It was as if the party and the government stood at the feet of Sasikala and her family.

Sasikala had always been in Jayalalitha’s shadows and was seen as the real power centre for the past 30 years—and with no accountability to the public as she held no post in the government or the party. No journalist could meet her or interview her in all these years.

The real test for Sasikala’s political acumen will be in the coming years, starting with the forthcoming local body elections. And the 2019 Lok Sabha election would be the acid test for the AIADMK without Jayalalitha. Can the party repeat her 2014 record of winning 37 seats out of 39 in the absence of a popular campaigner?

Political analysts are again busy writing the party’s funeral notes. Its survival or destruction would depend not on its own strength or weakness, but on its equations with the ruling party at the Centre. With the Supreme Court’s judgement pending in the disproportionate assets case in which Sasikala is one of the prime accused, the consoling presence of leaders from the Centre at Jayalalitha’s funeral is the only ray of hope for the party and its new supremo.

(Gnani Sankaran is a Tamil writer and journalist.)