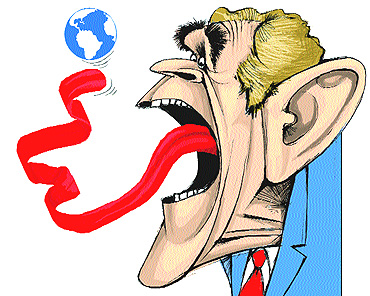 outlookindia.com
-0001-11-30T00:00:00+05:53
Sure, he looks good, means well, and the rhetoric soars like the bald eagle that is the macho symbol of these united states. But how much longer before the novelty of a black man in a white house wears off, and the world starts pining for the comedian-in-chief, the just-for-laffs jester he has pushed aside?

Make no mistake. There are many admirable things B.H. Obama does: he inspires, he promises, he stuns with his jaw-dropping ability to shame a TelePrompter. But surely I am not committing any diplomatic boo-boo in suggesting that, yes he can bore, too, with his 24x7 earnestness and political correctness?

And that if you are not bored yet, you will soon be?

The rights of the homeless, climate change, gay rights etc are all worthy issues, no doubt. But if Al Capone’s co-townsman is going to take this assignment with such zeal, who is going to pry open closed Chinese doors, give German chancellors a quick neck massage, tell the Pope his speech was ‘awesome’, and think the Queen is, well, 250 years old?

Maybe keeping the world in splits ain’t part of the job profile of POTUS. But it helps lighten the burden of watching him set right the world his predecessors screwed up. It reminds and reassures us that the leader of the free world has risen from the apes like the rest of us; not descended from the high heavens.

Dubya wins hands down; what is Barack’s nickname by the way?

"The first thing I’m gonna do when I get outta here? I’m gonna crack a Bud, and walk around my house naked. A movie on me is going to be a cross between Harry Potter, Die Hard and Forrest Gump," the humorist Will Ferell impersonating Bush said on the Jon Stewart Show. Dare anybody crack a jibe like that on O?

Heck, is he even going to inspire a show like Stewart’s?

Of all the burdens Obama carries, the second-heaviest must be the fact that the world perforce takes him deadly seriously: partly because of the colour of his skin and the kind of world he inherits, but largely because he is an erudite, articulate man; a citizen of the world who thinks and cares for us homo sapiens.

The world is watching and he knows he can’t eff up. It’s Harvard’s reputation that’s at stake.

On the other hand, the Texas Ranger who went to Yale didn’t let that stop him from calling a reporter "a major-league asshole", declaring Saddam Hussein killed Nelson Mandela or telling his fellow Americans that terrorists "never stop thinking about new ways to harm our country and our people, and neither do we".

Bush had plenty going against him, and good riddance. But there was an endearing quality about him. The prospect of four years of Obama, if not eight, should scare the hell out of even Osama. A near-perfect education, near-perfect sentence formations, not one hiccup. Obama’s demeanour seems to suggest, to err is divine, to forgive human.

In his last pow-wow with the press corps in Baghdad, "43" was hand-delivered a pair of size 10s. So far, all "44" has received are certificates of "10". From that soaring height, the only way out is down.

(Arvind Swaminathan is a software honcho who divides his time between San Francisco and Chennai.)

Ice Breaks On The Potomac