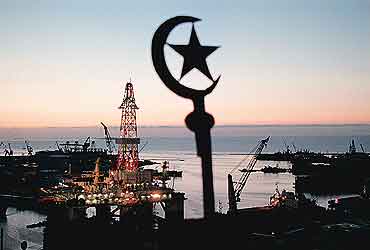 outlookindia.com
-0001-11-30T00:00:00+0553
A few years ago, R.K. Pachauri, director, TERI, met a senior Iranian leader in Teheran. Pachauri was there to push for the India-Iran gas pipeline that he had been advocating for years. The Iranian leader said that his country did have a lot of spare gas in the southern region and wished to supply it to friendly Islamic nations in the region. And then he threw a bombshell: "In that respect, India would be a suitable buyer." Pachauri realised that Iran had no qualms doing business with India given its huge Muslim population, the second largest in any country after Indonesia.

The tables have turned a bit today. In its almost desperate search for oil and gas supplies across the world, India is clamouring for the Islamic world's attention. From Africa to West Asia to Central Asia to East Asia, the NDA government is formally using a 'friendly crescent' that will take care of its burgeoning energy needs. At the same time, there's a realisation that this strategy has far-reaching foreign policy implications. For, in one stroke, these links help New Delhi isolate Islamabad, sensitise hitherto unfriendly nations to the truths about global terrorism, and improve India's (pro-Hindu and anti-Islam) image in the international arena.

Pachauri agrees there's a 'renewed emphasis' on forging links with Muslim nations. Former foreign secretary J.N. Dixit says: "The latest phase is based on political realism and complementarity". And security analyst Uday Bhaskar, deputy director, IDSA, feels "there's a concerted attempt by this government to dispel certain impressions". He specifically points to growing Indo-Israel relations that's irked the Muslim world and the change in perception about India's secular mindset, post-Gujarat. But all of them, as also the several officials Outlook spoke to in the ministry of external affairs (MEA) and the prime minister's office (PMO), agreed that India was being goaded by the larger vision of oil, Islam and terrorism.

To understand this grand gameplan, one needs to look at some geopolitical and economic realities. The fact is, India is an energy-deficient country and demand for oil will have quadrupled in the next 20 years. Despite the rich domestic gas strikes in the Krishna-Godavari and Cambay basins recently, it will continue to import almost 80 per cent of its requirement. Therefore, there's a need to seek fresh global sources, either in the form of investments in newly discovered oil and gas reserves overseas (as ONGC has done recently) or go in for long-term supply contracts with friendly nations. The other truth: most of the oil reserves are in the Islamic belt—stretching from Africa to the Near East.

Obviously, India has no option but to become friends with these countries. For the oil nations, finding large buyers in the developing world is critical to improving their revenues and reducing dependence on the developed world. Moreover, they can as a quid pro quo source technologies and products from India. Pachauri explains that most of the oil-rich, Islamic world is "wedded to buying things from developed nations", and at a much higher price. So, they look at India as a supplier of cheap but good quality products.

Once economic links get concretised, New Delhi can gain both diplomatically and politically. The reason: the 'friendly' Islamic nations form a ring around Pakistan (see map) and make the latter's leadership apprehensive about India's growing clout. More than that, the Indian leadership has the chance to put across its viewpoint on issues like Kashmir and terrorism. Take the case of Malaysia, a traditional supporter of Pakistan. In recent times, India has tried to increase its crude supplies from Malaysia. It's also inked a free trade agreement with the 10-member asean group which includes, apart from Malaysia, Thailand and Indonesia.(Malaysian leader Mahathir Mohammad, who retires on October 31 this year, though, still remains a silent critic of India.)

Similarly, most East and Central Asian countries haven't overtly criticised India on the Kashmir issue. And while Iraq has been a supporter of India on multilateral fora, India and Iran have become much closer in the past few years. Another good example of how good economics can result in better diplomacy is the case of Senegal, for which India is the second-largest export destination after France. During the recent visit of Senegalese President Abdoulaye Wade, the Indian leaders urged him to counter the anti-India resolutions routinely moved by Pakistan at the Organisation of Islamic Conference (OIC). What's important is, Senegal is a strong contender for OIC's chairmanship and may host the annual summit in 2006.

"It's obvious that we can win over decision-makers by establishing strong relationships," explains Pachauri. His argument is bolstered by IDSA's Bhaskar who points out that "implicit in all these moves is the Pakistan angle". Even PMO officials contend that most of these friendships are to "counter Pakistan". Says one of them, "It's now clear that Islamabad is feeling the pinch." In fact, several MEA officials feel the "Islamic" plan is being monitored on a regular basis by senior PMO officials close to the PM.

Another advantage for India is on the terrorism front. In the past, India's stance on Kashmir was mostly blunted by Pakistan, within the Islamic bloc. Post-9/11, the situation changed a bit but India kept complaining about the double standards followed by the US and the UK on the issue. In fact, at multilateral fora, the issue remains unresolved as Islamic nations kept insisting on defining terrorism and detailing its root cause. But, in recent times, New Delhi is being taken more seriously. For example, during Prime Minister A.B. Vajpayee's recent Bali visit, Filipino leader Gloria Arroyo accepted India's logic that terrorism was terrorism, whatever the root cause may be.

Even in the case of Central Asian nations, their internal concerns now match India's. A New Delhi-based terrorism expert explains that leaders in the region don't want their nations to "fall into the trap of the Muslim fundamentalists" and wish to "retain the secular traditions" they inherited from the old Soviet Union. In that sense, they are as keen to combat global terrorism as India. As Dixit puts it, "The ground realities are impelling both sides (India and a sizeable chunk of the Islamic world) to cope with it together." The recently signed joint declaration on international terrorism between India and asean is a pointer in this direction.

India has traditionally maintained cordial relations with several Islamic countries. For example, a lot of them became members of the Non-Aligned Movement initiated by Jawaharlal Nehru. Even later, labour inflows from India to West Asia bolstered the linkages. But all this changed during the 1980s and the 1990s and India started getting distanced from them. According to Dixit, the factors responsible for the strains included Pakistan's powerbase within the OIC, India receiving flak over the Kashmir issue, oil-rich Muslim nations not giving concessions to India during the various oil crises, and New Delhi's support to Saddam Hussein during Gulf War I.

Now the fences are slowly being mended. But huge gaps still remain which have to be plugged. And there are enough opportunities—and reasons—to do that. For example, after Mahathir, Malaysia's new president may turn out to be more friendly towards India. Similarly, India can use its friendship with Senegal to create rifts within the OIC. However, New Delhi will have to play this delicate diplomatic game with care.Most experts feel that when it comes to the crunch, almost all the Islamic nations may still end up siding with Pakistan. That's when the grand vision could simply vanish in a blip.