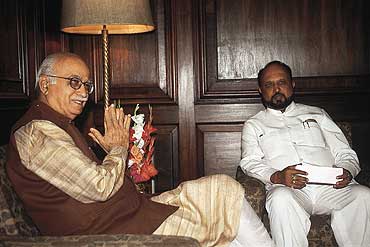 "It would have been difficult for me to campaign against you."
--Atal Behari Vajpayee to Assam chief minister Prafulla Kumar Mahanta after the BJP decided to forge an electoral understanding with the ruling AGP

Prime Minister Vajpayee is an affable old man. Just the sort of man his hardline party desperately needs. Skilful in transforming political acrimony into electoral entente via the personal friendship route, Vajpayee, it seems, is the greatest charmer of them all. It is this kind of charm which has, once again, given the post-Tehelka, weather-beaten BJP more than a semblance of hope in Assam.

The personal rapport that Vajpayee has shared with chief minister Prafulla Kumar Mahanta, ever since the six-year-long anti-foreigners agitation launched in the early 1980s, has swiftly altered the political equations in this northeastern state. Of course, home minister L.K. Advani's belief that the Congress must be stopped from coming to power at all costs has been the much-needed catalyst which has brought the BJP and its hitherto tough-talking adversary close enough to be allies.

Although the BJP state leadership, led by its president Rajen Gohain, had gone to town criticising the Asom Gana Parishad (AGP) and declaring its total opposition to any tie-up with the regional party, post-Tehelka the BJP has decided to take the Congress on aggressively. Hence the decision to go with the AGP. Says a senior BJP leader of Assam: "In Advani's view, the AGP is more acceptable than the Congress."

For the AGP, the alliance makes sense. As Mahanta told Outlook: "For an economically backward state like Assam, a friendly Centre is very essential. Moreover, the Congress is our common enemy. It should, therefore, come as no surprise that we've decided to fight the elections together." Contrary to expectations, the AGP cadre wholeheartedly supported Mahanta's move.

At a general body meeting of the party on April 2, even Muslim MLAs and leaders endorsed the alliance. Asks Abdul Jabbar, a minister in the Mahanta cabinet: "If Farooq Abdullah can be a part of the BJP-led nda, why can't we become alliance partners?" The AGP might have backed the new arrangement but the party's two Left partners (cpi and cpi(m)), sharing power with it since 1996, withdrew their support with a cpi minister quitting the cabinet.

Within the BJP state unit though, there has been a lot of heartburn. Upbeat after a massive improvement in the 1999 Lok Sabha elections, the state leadership was hoping to make spectacular gains in the assembly polls. But now that the alliance has been forced upon them, many ambitious leaders are upset. As Outlook went to press, negotiations between an AGP team and BJP office-bearers for evolving a seat-sharing formula were still on.

In the 126-member assembly, the AGP had won 63 seats in the 1996 polls. The party, therefore, wants those seats for itself. The BJP, however, argues that its candidates had fared better than the AGP in 83 assembly segments in the 1999 Lok Sabha elections and hence its popularity is on the rise. One formula that is being talked about is to allot 55 seats each to both the parties, leaving 16 remaining seats to the Bodo and Karbi groups which will support the AGP-BJP combine.

The AGP's sudden decision to enter into this alliance has, however, upset all of Congress' calculations. The party was hoping that a three-way contest would facilitate an easy regaining of power.Now, however, it will have to rethink its strategy. The party has, in fact, put off the announcement of its candidates till the new alliance firms up.

The Congress can console itself by painting the AGP-BJP with the same brush. Says Congress MP Paban Singh Ghatowar: "By aligning with the corrupt and inefficient AGP, the Tehelka-tainted BJP has only shown its true colours. We plan to make this a major electoral issue."

The Congress is also hoping that the substantial minority votebank (Muslims constitute over 28 per cent of the population) would consolidate in its favour following the AGP's decision to go with the BJP. The minorities are a decisive factor in at least 30 assembly seats in Assam. From a no-contest earlier, the assembly polls in Assam have suddenly become a two-horse race with the Congress arguably retaining a slight edge over its rival combine. The BJP, however, is undoubtedly back in the reckoning. The 'Vajpayee magic' (read the pressures of realpolitik) has worked again.