A Fistful Of Soil 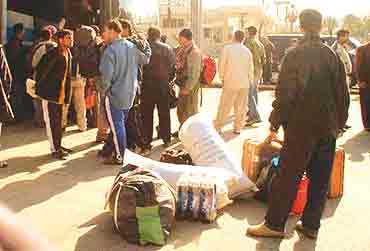 outlookindia.com
-0001-11-30T00:00:00+0553
It’s Monday in downtown Amman. Knots of people are huddled around the bus on Mahata street. They are all Iraqis, throwing wistful glances at others or whispering words that can’t express their emotions. It’s time for the bus to leave; the perilous journey to hell is about to begin—to Baghdad, waiting to collapse under the onslaught of coalition troops.

Adnan Kamel, 30, steps out to wave to his four friends, then to 45 others on the bus. His eyes brim with tears: "They are going to fight along with our brethren in Iraq and I’ll follow in a matter of days." Kemal hails from Basra, still under siege. "The war is not only about bombing, tanks and artillery. Victory is not military victory, it also means victory of principles. God willing, we’ll resist the Americans."

Among the passengers travelling to Baghdad is Sameer Adnan, 28. Deaf and mute, he had been teaching sign language to others similarly challenged. What persuaded him to take the trip to Baghdad was a missile attack on his neighbourhood. "I want to see my mother, father and my six-month-old son," says Adnan, adding, "And to also fight for Iraq. I don’t feel scared."

The war in Iraq has sprung quite a few surprises. But nothing more spectacular than the spunky Iraqi resistance—and the impact it has had on the expat Iraqi population here. Around 3,50,000-strong in Jordan, comprising mostly immigrants post-Gulf War I, they are horrified at what the US has done to their country, raining down bombs and missiles 24 hours. These two factors together have just about brushed everything aside—their hatred for Saddam and that very human desire for security and predictability in life.

Unlike the first Gulf war, there is now a reverse flow into Iraq: Jordanian officials say 7,500 Iraqis returned home in the fortnight of the war. That these are credible claims is vouched on several visits to Mahata street, one of the many transit points for Iraqis. On one such visit I encountered Riyadh Mated Abel, a 25-year-old painting supervisor who came here from Samawh, southern Iraq, six years ago. "I was planning to get married here, but now I’d prefer to die in my country," Abel said. And he’s just one of the many I met.

But there are some who want to rush to Iraq because of their anxiety for their families. Ibtisam Shaker, a 35-year-old woman from Baghdad, is surrounded by her three children, as her husband enters the bus to grab seats. She says tremulously, "Ever since communication lines snapped, we have been worried about our family in Iraq. It’s better to be with them."

What galls Iraqis here is the condescension of the world. Says Safa’ Muften, a 39-year-old Iraqi businessman, who plans to return to Iraq soon: "The opposition in exile told the Americans that all Iraqis will surrender, and that they are weak, hungry, poor and ready to sell their own fathers. But we haven’t even sold a handful of soil."

One catalyst for the reverse flow is the offer of free transportation by Iraqi businessmen. (Travelling costs have increased 20-fold). Equally awesome is the courage of those drivers willing to take the road to hell. Hear what 43-year-old taxi-driver Eidan Ramadan says: "We are not afraid of death. For, we know human beings die only once."