A Farm Twist To Caste Power

Jats queer the agitation pitch, tapping into agrarian discontent to forge alliances across states and castes 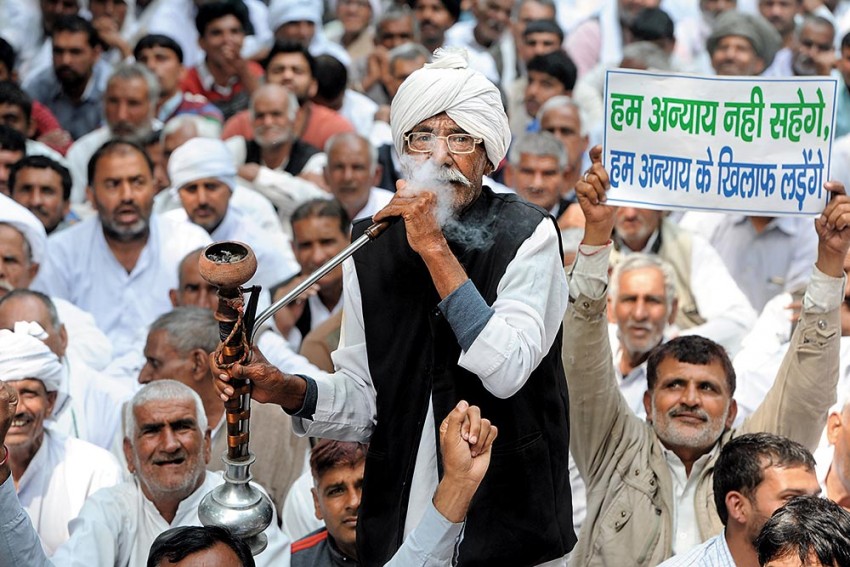 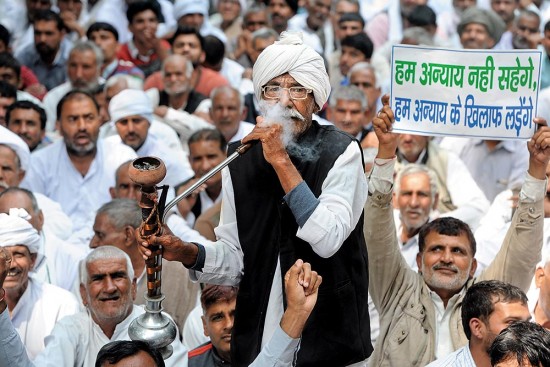 Haryana’s Jats have donned the agitator’s hats again, gather­ing in Rohtak, Jhajjar, Hisar and Jind, in large numbers. While the wheat crop ripens, the Jat peasantry, relatively free until the April harvest, is drawing up plans to besiege Delhi. Led by a new generation of pro-reservation leaders, the Jats are sure they aren’t going home until cases filed against their “boys” during last year’s agitation are withdrawn.

The bluster comes from the newfound cross-state camaraderie Haryana’s Jats have forged with their caste fellows from Uttar Pradesh and elsewhere. Jats from UP and Madhya Pradesh as well as Bharatpur and Dholpur in Rajasthan, where they are excluded from reservations, regularly attend the protests. The Jats’ actions are sending out the message that they are a community with plenty of regional clout. They are a quarter of Haryana’s population and their political influence on neighbouring UP is quite disproportionate to their two per cent share in the population there.

Although Haryana’s local politics has so far left no large footprints in Delhi, these alliances could well change that. “This is not a movement confined to one state. We are Jats from 13 states,” says Yeshpal Malik, president of the All India Jat Arakshan Sangharsh Samiti (AIJASS) and a retired IAF airman-turned-businessman with roots in western UP’s Muz­affarnagar. It took him five years to climb to the top of Haryana’s pro-reservation leadership, reflecting the growing cross-state fellowship of Jats. 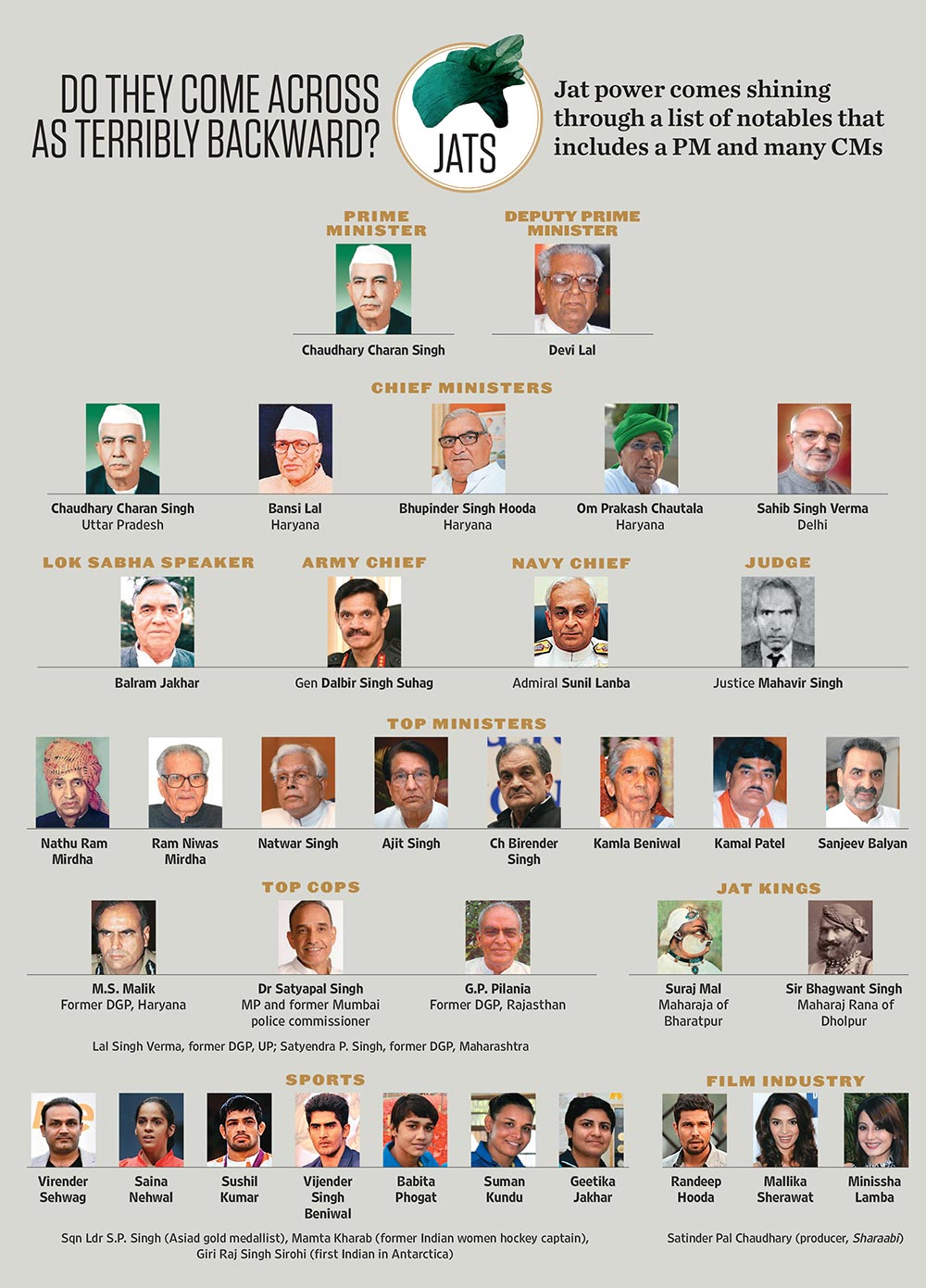 “My next goal is to unite Jats with non-Jat OBCs,” says Malik. “We will unite all these groups socially, just like we united the Jats. Did anyone think the UP, Delhi and Haryana Jats would ever come tog­ether?” As the Jat agitation does need a wider anti-government sentiment to sustain itself, the leaders are trying to tap into the larger agrarian discontent, to strike a chord beyond their own caste.

“They deducted Rs 100 per acre for crop insurance without asking us and yet our insurance claims are often refused,” says Ashok, a Jat from Jasaiya in Rohtak on whose farmland the protesters now gather. “Haryana CM Manohar Lal Khattar’s government takes all the cream, but refuses to share even a glass of milk.”

The peasants’ discontent against the Khattar government has spurred the Jats to believe that a coalition of Jat and non-Jat OBCs can take shape. “The poorer Jats or Sainis wouldn’t mind earning as little as Rs 200 a day as farm labourers, but the real wages are even less,” says Raj Singh, a 62-year-old farmer from Balamba village. “Everyone suffers if labour is this cheap. The farmer still spends Rs 6,000 to grow a quintal of wheat that gets him just Rs 1,500.”

Another protester Karambir says, “The BJP promised two crore jobs across India and, in Haryana, Khattar promised  one lakh. But people don’t believe these promises anymore. That’s why even the Sainis support reservation for Jats.”

The need for an OBC-Jat alliance bec­ame more salient due to the war of words between Saini leaders and Jat protesters last year. As OBCs in Haryana, the Sainis know the Jats would eat into their share of jobs if given OBC status. “Last year, the Khattar government wanted to create a permanent vote-bank by pitting Jats against non-Jats. This time, they won’t succeed,” says Dinesh, a young man from Bhagwatipur who has camped at the Rohtak protest site for over a month. Indeed, Raj Kumar Saini, BJP MP from Kurukshetra, has been relatively quiet through the Jat agitation this year, but that could be because the party wants to avoid any disruption during the UP assembly election. “This agitation is totally peaceful. Even a bird hasn’t dro­pped dead. We are in it together, Sainis and all,” says Ashok Balhara, Har­yana coordinator of AIJASS, who reads in Saini’s silence the community’s support for Jat reservation.

“Most Sainis don’t hate the Jats,” says Kishan Lal Huda, one of the organisers of the agitation at Jasaiya. “If anyone needs Rs 10,000 at midnight, they go to the Jats. We have the OBCs’ support in Haryana as they live with us 24x7.”

While the BJP awaits the poll results to decide what to do, the Jats are waiting too. “We sent teams to western UP to tell the Jats not to vote BJP,” says Malik. If the BJP slides in western UP, they expect the party to come under tremendous pressure to broker peace with them. “And if the BJP does well, the agitation may eit­her fizzle out or turn violent,” says a senior Jat leader. “It is unpredictable as the Jats do not seem to have a Plan B.” 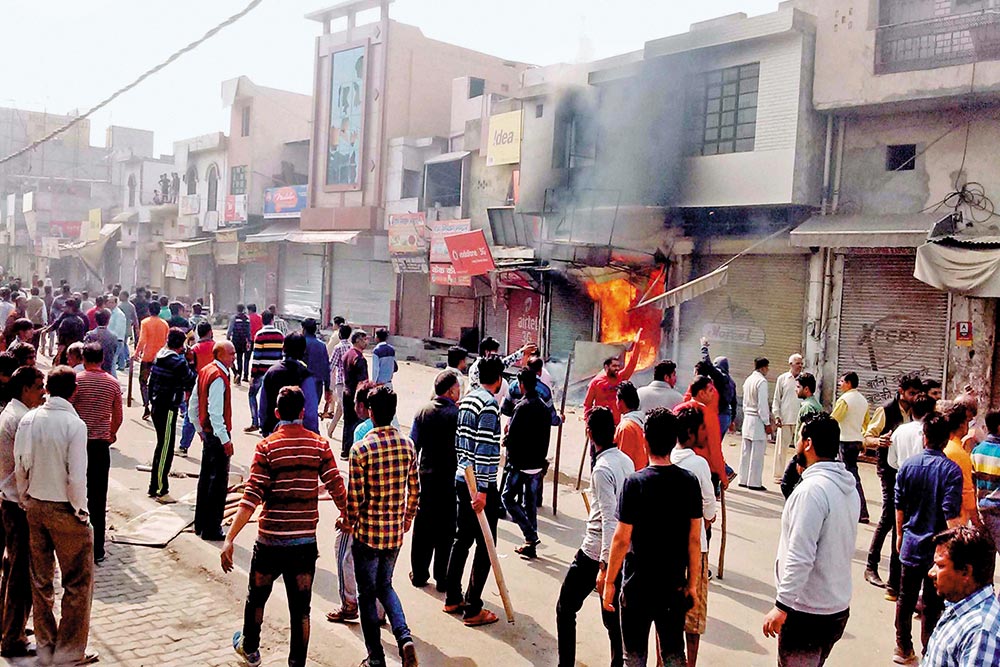 In 2013, the then UPA government asked the National Commission for Backward Classes (NCBC) to examine existing documents and ascertain if the Jats should get reservation. The NCBC concluded they should not, for they were not lagging too far behind the upper castes socially. There have been Jats CMs and a Jat PM and the caste is well-represented in government jobs.

Malik, however, points out that “social backwardness doesn’t change if one person does well”. “H.D. Deve Gowda was PM, Mayawati was CM. Does it mean all is well with the communities they come from?” he asks. The UPA, in fact, went on to overrule the NCBC in 2014 and inc­luded Jats among OBCs, but the Supreme Court struck it down.

Last year, the Jats’ clamour for reservation as OBCs in Haryana reached a crescendo and the agitation ended in violence against the better-off non-Jats. This forced the state government to create a new ‘C’ category for reservations, under which Jats and a few other OBCs were allotted a 12 per cent quota. This was stayed by the high court.

“Under these circumstances, the ongoing agitation can achieve nothing,” says ex-serviceman Hawa Singh Sangwan, who launched the first Jat agitation for reservation in 2006 under the AIJASS banner from Maiyar in Hisar district. That agitation had support from Congress leaders such as the then Haryana CM Bhupinder Singh Hooda. Explaining why he opposes the current agitation, Sangwan says, “Now, the reservation matter is sub judice, so the agitation’s main agenda is to get the criminal cases withdrawn. This can be achieved only through discussion with the state government, not by agitating.”

Jats are a socially and economically div­erse community, with the majority eking out a living as sharecroppers. While educated Jats from urban areas stand to gain the most from reservation, the poorer Jats in the villages stand to gain little from job reservation as many lack the educational qualifications needed to take advantage of it. And yet it is the latter who have taken to the reservation cause with gusto, with every village contributing roughly Rs 6 lakh on an average to sustain the agitation. As much as Rs 3 crore has been collected from Sonepat and surrounding areas, besides carrots, milk, potatoes, LPG cylinders and 50 men who cook meals.

Jat voters in Jasaiya, the nerve centre of this agitation, had shifted loyalties to the Hooda-led Congress in the 1990s, away from the Chautala-led Indian National Lok Dal (INLD). “In the name of Jat reservation, the INLD is trying to break Hooda’s grip on the region,” says Sangwan. In fact, leader of the Opposition in Haryana, Abhay Singh Chautala, has been visiting Jasaiya regularly. Some see it as an attempt to challenge Deepender Hooda, who won the Lok Sabha election from Rohtak in 2014. Jasaiya is one of the villages around Rohtak, besides Sangi, Bhor and Kaneli, which were once Chautala strongholds.

Whatever its fallout on Haryana politics, the Jat agitation has certainly div­ided the AIJASS. Daljeet Panghal, its Hisar president, is visibly uncomfortable with the agitation. “On February 27, the government assured us on reservation and releasing innocent Jats,” he says, all­eging that Jats are being misled by the protests and that the agitation could well slip out of control unless there is some conciliation soon. “How long will the ­agitators be patient?”

This, indeed, has been the question ever since the violent agitations last year. Three rounds of talks with the government have failed so far. “The officers who came for talks were rigid, so we refused to entertain them until they meet our ­demands,” says Malik.

As for reservation, that is a long-drawn affair, calling for fresh surveys by the NCBC, and could well lead to untenable politics. If, say, the Yadavs are excluded, the Jats, being socially similar, would be excluded too. Meanwhile, unless last year’s cases are dropped, there’s no telling where the brinkmanship leads.

By Pragya Singh in Hisar & Rohtak