A Family Reined In By Ambition 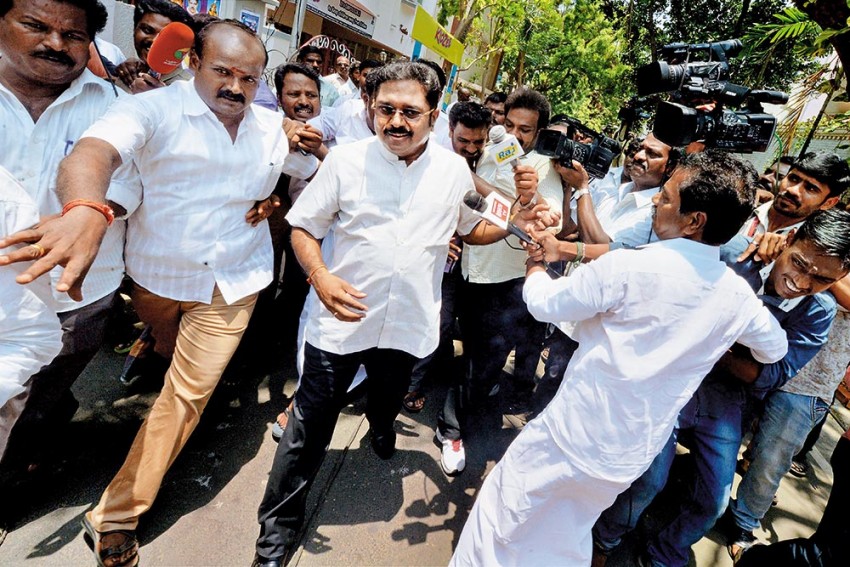 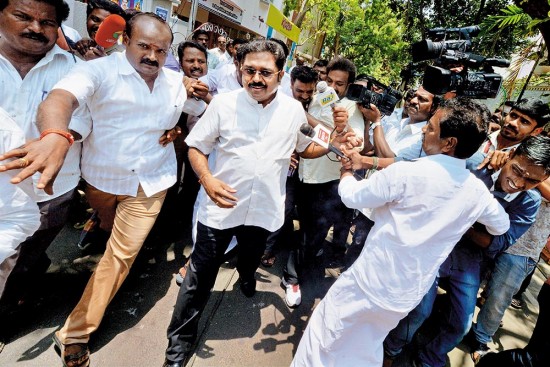 The unthinkable happened in Tamil Nadu and its ruling party, the AIADMK. Just when everyone assumed that the stranglehold of the Sasikala family on the party and the government was unshakable, the state’s most feared clan suddenly got ejected from the political equation. On the Tamil New Year’s Day, ministers and most of the 122 MLAs supporting the Edappadi K. Palaniswami government revolted against T.T.V. Dinakaran’s influence over the party. Dinakaran, Sasikala’s nephew, was made deputy general secretary of the AIADMK before the aunt went to a Bangalore jail.

“We want the party to be freed of the influence of one family belonging to ­Dinakaran. We also want to merge both the factions and reclaim the ‘two leaves’ symbol,” the state’s finance minister D. Jayakumar announced on Tuesday night after consulting the CM and his cabinet colleagues, all of whom had campaigned for Dinakaran two weeks ago for the RK Nagar bypoll.

Dinakaran tried to fight back until late on the night of April 18, asserting he had the backing of all the MLAs. He even called for a meeting of the MLAs at the party headquarters the next afternoon, only to cave in on the morning. “If my staying away from any party posts or act­ive politics will help save the party and the government, then I am willing to step aside,” he stated meekly. He also realised that less than 10 of the 122 MLAs were with him, which would be compensated by the 12 MLAs with O. Panneerselvam. 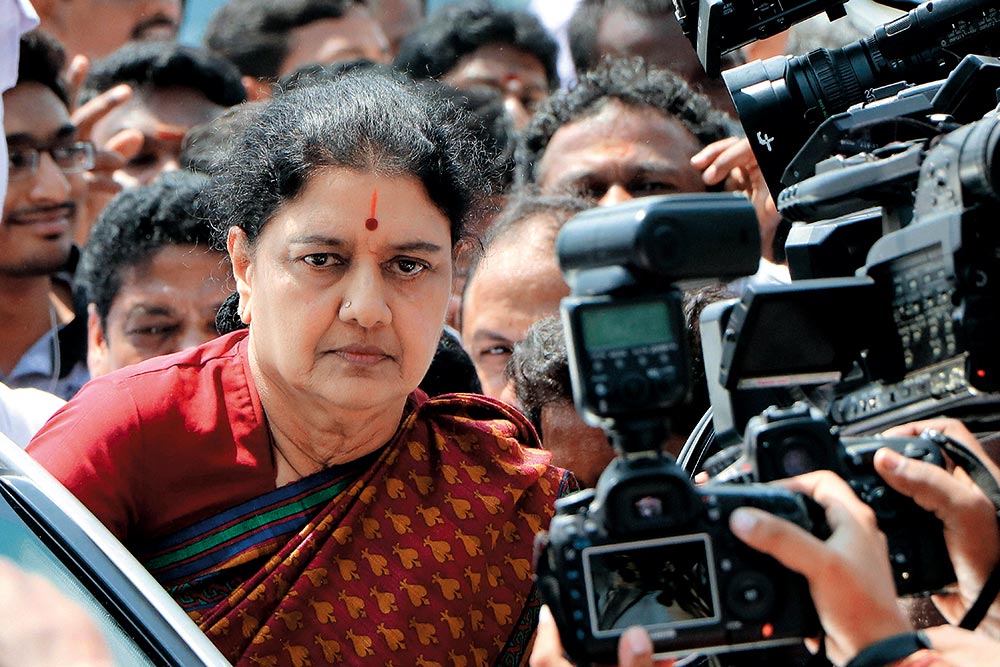 Dinakaran inferred that the ministers wanted his scalp because they were afraid of someone. The same fear factor also forced him to take “sanyaas” after a few hours of defiance. He is facing a FERA case, which might send him to jail and disqualify him from elections.

Moreover, Delhi Police’s Crime Branch had on April 17 arrested Sukesh Chandrasekar, an alleged fraudster and fixer, ­after he had reportedly assured Dinakaran to bribe Election Commission (EC) officials to restore the frozen ‘two leaves’ symbol to the Sasikala faction. The police, alerted by a hawala transfer of Rs 10 crore from Kochi through an ope­rator in Chandini Chowk a few days ago, had started monitoring Sukesh’s mobile phone and were stunned to hear Dinakaran’s voice during many phone calls. Now Dinakaran has been summoned to Delhi for questioning.

“Both Sasikala and Dinakaran were undone by their undue haste to capture power,” says a senior police officer. ­“Unless the BJP exploits the resentment against the family among the public and the cadres, it cannot position itself in the state for the 2019 general election. For this, it needs a united and strong AIA­DMK minus the Mannargudi mafia.”

“The root cause of public resentment against Sasikala and her family is that they neglected Amma’s health,” says MP V. Maithreyan.

Refusing to be content with being ­gen­­­­­­­­­­eral secretary while Panneerselvam runs the government, Sasikala wanted to be all-powerful like J. Jayalalitha, but ended up in jail in the assets case.

Dinakaran proved no better. Rather than ‘manage’ CM Palaniswami, he too became power hungry. His greed to be CM had him literally throw his hat into the electoral ring of RK Nagar even as the EC froze the popular ‘two leaves’ symbol after the party split.

To win at all costs, he flooded the constituency with crores in cash. “Sasik­ala and Dinakaran failed to gauge the resent­ment against their family among the people and the cadre,” observes former Chennai deputy mayor Karate R. Thiagarajan. “He could not even put Sasikala’s pictures in his election posters in RK Nagar and tried to compensate this negativity through bribes to voters.”

The currency deluge led to a raid by income tax authorities on health minister C. Vijayabaskar, considered close to Dinakaran, which exposed how top ministers were part of the cash trail. The EC cancelled the poll and Dinakaran’s CM dream lay in tatters. With a CBI probe staring at them, Palaniswami and his ministers were apparently given a simple choice by New Delhi: dump Dinakaran and Sasikala, reunite the factions and continue to govern for four years with the Centre’s blessings.

The merger would need a formula to acc­ommodate Panneerselvam, who would be the natural choice for CM, having held that post thrice. But the powerful Gounder lobby to which Palaniswami belongs, would want to protect its newfound privilege. If that happens, Panneerselvam could head the party as general secretary hoping to cash in on his newfound popularity. “If Panneerselvam makes peace with the faction he had opposed in the RK Nagar bypoll, his moral sheen could suffer,” says N. Ravikumar, a leader of the Viduthalai Chiruthaigal Katchi (VCK). “People had welcomed his faction as a new political party and he should build on that rather than go back to the AIADMK.”

Indeed, having acquired a halo after preventing Sasikala from becoming CM, Panneerselvam would expect unification to happen only on his terms. “He was Jayalalitha’s choice twice, while Palaniswami was Sasikala’s,” says K.P. Munuswamy of the Panneerselvam group. “The people see Panneerselvam as the real CM. For the government to have any credibility, he has to head it.” 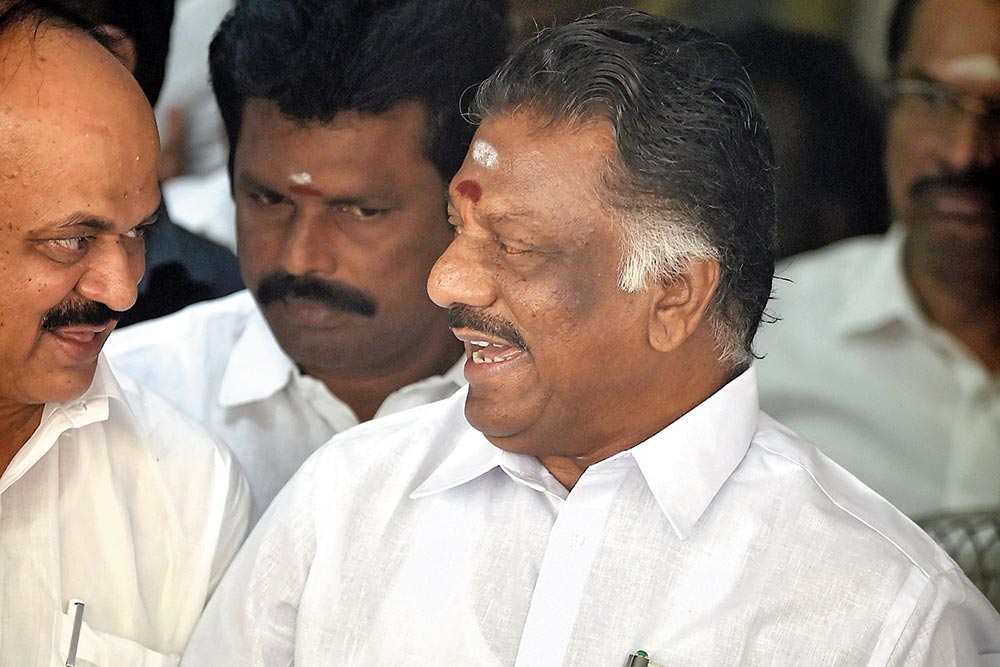 The Panneerselvam group’s insistence on a CBI probe into Jayalalitha’s death is projected as reflecting the public mood. “During our RK Nagar campaign, women held Panneerselvam’s hand and asked him to go after those responsible for Amma’s death,” says Rajya Sabha MP V. Maithreyan. “The root cause of the resentment against Sasikala and her family is that they neglected Jayalalitha’s health and may have contributed to her death.”

It would not be easy for the Panneerselvam group to trust that Dinakaran’s sudden decision to stay away is the final bow by the Sasikala family. Unless Sasikala and Dinakaran are officially expelled from the party along with other family members, and the process of electing a new general secretary set in motion, the cadres will see the whole Dinakaran drama as a sham. The family is too vested in the AIADMK to give up everything suddenly and walk into oblivion.

With such imponderables, the mer­ger may prove trickier than envisaged by both the sides. Dinakaran’s retreat could also be tactical, hoping to take charge again if the merger does not happen. “Having known them for decades, I can vouch there is nothing black and white about their actions. It is always different shades of grey,” says a former legal adviser of the Sasikala family. “I would not be surprised if Dinakaran comes up with a surprise in a few days.”

As for the BJP, its sights are firmly fixed on reuniting the AIADMK, enticing it with a couple of ministerial berths at the Centre and striking an alliance for the 2019 Lok Sabha election. “It could be a formidable front to challenge the DMK, which has the Congress and the Muslim League in its stable and plans to rope in the VCK, a Dalit party, and the CPI as well,” observes political analyst Ravindran Duraisamy. The plan has been set in motion with the ouster of the Sasikala clan.