Vajpayee fires another salvo, asking for Modi's head. The vertical split in the Sangh parivar is near complete. 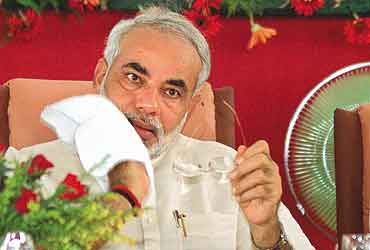 outlookindia.com
-0001-11-30T00:00:00+0553
Brutus could not have done better. Still smarting from their defeat in the Lok Sabha elections, the last thing that the BJP top brass needed was another first-class crisis. And that is precisely what they have got. Former prime minister Atal Behari Vajpayee—until a month ago the undeniable party mascot—has landed the BJP into such a crisis by publicly raking up the issue of the Gujarat riots for the second time in a week. Barely two days after the party had issued a clear rebuff to Vajpayee by contradicting him on the touchy Gujarat issue, he reaffirmed his position on June 17. The sign of a vertical split within the BJP between the so-called moderates and the hardliners coincided with a reassertion of Vajpayee as the supreme leader of the party.

Leaving for the cooler climes of Manali after a difficult election campaign which ended in defeat and a stormy but short parliament session, Vajpayee gave out nary a hint of what was coming. In a carefully televised TV interview, he said what the Sangh parivar did not want to hear: the blame for the electoral defeat lay with Narendra Modi, the roundly reviled Gujarat chief minister. When the Sangh pantheon hit back the same day, rather rudely trashing what Vajpayee had said, there was clearly a storm waiting to happen. Before the week died out, Vajpayee hit back again, insisting Gujarat will be discussed at the party national executive meeting in Mumbai. "We will discuss Gujarat in Mumbai. We will discuss it with an open mind. We discuss (such issues) both after victory and defeat. We will not be afraid of discussions," he told a public meeting in Manali on June 17.

Even the habitually critical RSS leaders have come around to saying Gujarat can be discussed. Only, they don't want the riots to be linked to the election results. But it indicates how jittery the Sangh is about Vajpayee making Gujarat an issue in the party's crucial two-day national executive meeting in Mumbai on June 22. And this is precisely what Vajpayee is planning to do. Despite party chief Venkaiah Naidu veering towards the RSS line, saying that sacking Modi or a discussion on Gujarat were not part of the agenda, Vajpayee's quiet resilience carried the day.

So stunned was the BJP when Vajpayee made his June 17 assertion on Gujarat that most of its leaders, including garrulous party spokesman Mukhtar Abbas Naqvi, went into hiding. Even Naidu made no attempt to clarify. When contacted by Outlook, he pleaded ignorance: "I do not know anything about what Vajpayeeji has said." Naidu's refusal to react is seen as an indication that the BJP top brass is chary of engaging in a public duel with a resolute Vajpayee.

Now the party crisis managers have swung into desperate action. Party sources say that senior leaders L.K. Advani, Naidu and RSS general secretary in charge of the BJP, Madan Das Devi, may meet Vajpayee on Sunday, June 20, a day after he returns from Manali. Though the official line is still that the issue of Gujarat and chief minister Narendra Modi's ouster is not part of the agenda for the national executive meeting, sources in the party say both these issues are likely to be discussed and "crucial decisions" might be taken either before or soon after the Mumbai meet. Does that mean a decision on Modi's ouster will be a placatory gesture to Vajpayee to save the party the public spectacle of an internecine feud?

This dilemma actually forms the core of the crisis that Vajpayee is seen to have precipitated. By singling him out thus, Modi's status on the symbol of hardline Hindutva has been underlined—which is why even the RSS, which otherwise wants to get rid of him, has had to object. What has shocked the BJP leaders most is the public laundering by Vajpayee especially since he knew fully well that the party had already decided to quietly ease Modi out. In a meeting held earlier this month, Vajpayee, Advani, Venkaiah and Madan Das Devi had reportedly agreed that Modi would be removed by July. "But that decision was strictly because of his style of functioning. It had nothing to do with the Gujarat riots. Now that Atalji has linked the two, the whole parivar has no option but to stand by Modi," says a senior party leader. 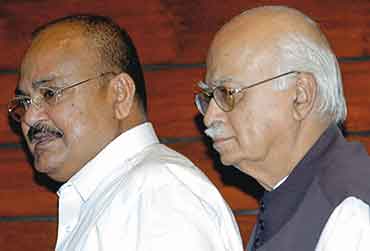 But Vajpayee is adamant on linking Modi's ouster to the riots—even threatening not to attend the crucial national executive if this issue was not discussed. It is an intriguing move but Vajpayee's supporters say he is sharpening the distinction between hardline Hindutva and the need for moderation—and asking equivocating elements like Advani to make a clear choice. "After the poll results, it is time to rethink and rebuild. We have to analyse each and every issue. Vajpayee has given a clear indication of which way the BJP should go. When he says the Gujarat riots were a setback, he means such incidents do not help the party to grow. He is giving us a direction. He is making a distinction between divisive Hindutva and a moderate approach. We have to heed it carefully," says a senior BJP leader close to Vajpayee.

Considering that not just the Trinamool Congress and the tdp but even—ironically—the Shiv Sena have openly blamed Gujarat for the NDA's defeat in the Lok Sabha elections, Vajpayee's supporters say his focussed salvos on that front are meant to give a further thrust to this argument. Insiders say Vajpayee has had to swallow the bitter pill several times on the issue of Narendra Modi and his handling of Gujarat riots. "Before our meeting in Goa in 2002, Vajpayee had almost decided that Modi should go. But strong voices within the party forced him to withdraw. His statement in Manali is an indication that he hasn't forgotten that insult. And unlike in Goa where he relented to the majority opinion, he has stuck to his guns in Manali," say party sources.

For the dissidents in the BJP state unit in Gujarat, Vajpayee's insistence on discussing the affairs of the state in the national executive meeting are an unexpected thrust to their efforts to throw Modi out. While state unit president Rajendrasinh Rana was rather circumspect in his response—saying that whatever Vajpayee, Advani and others decide will be binding on the Gujarat unit—others have welcomed the move with more glee. "If Atalji is saying it, there would be a discussion on Gujarat at the national executive. It should be discussed," says former Union minister and senior Gujarat BJP leader Kashiram Rana.

Vajpayee's outlining of his moderate line in public has never gone down well with the Sangh parivar. Hours after he first made his now controversial statement, the VHP and then the RSS openly attacked him. The more outspoken members of the Sangh parivar—like Ashok Singhal of the VHP—launched a public assault not just on Vajpayee, but L.K. Advani as well. "Vajpayee and Advani are responsible for the defeat of the BJP. It is time they make way for the younger generation," Singhal said. He also added, "Narendra Modi is very popular in Gujarat." Pitted against this attack, Advani has maintained a stoic silence. But BJP sources say that since he has been trying to shed his "hardliner" image and emerge as an alternative to Vajpayee, Advani cannot be seen siding with the VHP hardliners on the Modi issue.

There are enough indications that Advani would tread carefully on this matter. After returning from his vacation in Nainital, the first thing Advani has done is to hold parleys with Madan Das Devi. Advani is likely to meet Vajpayee after he returns from Manali. "Even Advani does not want the Gujarat issue to come up in the meeting. But the rest of the issues, particularly that of Narendra Modi, will probably be settled on June 22 itself," says a senior party leader.

The BJP is keeping its fingers crossed about whether Venkaiah, Advani and Madan Das Devi together would be able to persuade Vajpayee against adopting a collision course. The party has already paved the ground for reconciliation by stating that it is willing to discuss the Gujarat issue, albeit not strictly as part of the discussions in the national executive meeting. For those who were hoping that the BJP's electoral debacle would mean an end to Vajpayee's political career, this week's developments show that the 'Brand Atal' and the moderates in the party will not fade so easily. So, it is not bye-bye Vajpayee for the moment.