The IOA could be leaving Atlanta firm SMI in a lurch 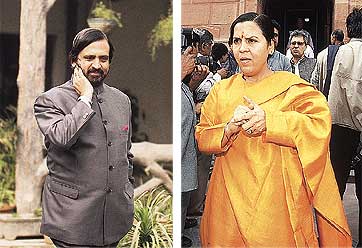 outlookindia.com
-0001-11-30T00:00:00+0553
Last November, the Atlanta Business Chronicle reported that a small, Atlanta-based firm, Sports Marketing International llc (SMI) had secured the rights to the 2001 and 2005 Afro-Asian Games. The newspaper also noted that Atlanta's mayoral candidate Shirley Franklin held a five per cent stake in the company. Franklin is running for the mayor's position in Atlanta this November—the very week the Afro-Asian Games will be going on in New Delhi. "We're committing to raise at least $15 million (Rs 70 crore)," smi founder and ceo John Lupton told the Chronicle. The report said smi had also been granted the worldwide commercial rights, including television and Internet rights and the licensing and merchandising rights to event-related products.

When the ioa sent out letters last March to seek companies willing to market the Games, smi was among those who applied. Last May, ioa officials, including Suresh Kalmadi, are believed to have met Lupton in Rio de Janeiro, assuring him that his company was being awarded the rights. A letter stating that smi had the rights to market the Games, subject to the approval of the ioa executive committee, was duly issued. In August, the ioa executive committee approved the choice of smi. Then followed a meeting in Sydney in September and another letter re-confirming the contract was issued to Lupton in December 2000.

But nothing has moved since and now Lupton, who is believed to have done a lot of spadework, is livid and ready to sue the ioa. smi is said to have signed on Rushman's Ltd of London, an event management company that did a lot of work for the 1999 cricket World Cup, to help stage the Afro-Asian Games. Rushman's were to have handled accreditation, transportation and logistical planning. smi also got TransWorld International to agree to handle all the live feeds and taping. Further, it tied up with Terry Merchandising, the largest African-American-owned apparel manufacturing company in the US.

Everything seemed fine till December, when the ioa suddenly went silent, leaving smi in the lurch. Somewhere along the line, ioa officials decided they would market the Games themselves. Now smi is believed to be threatening ioa and the organising committee with legal action and asking for damages—upwards of a million dollars (Rs 4.7 crore). No star teams, no star players, no marketing. It can't get grimmer than this.