A Door Unto Me

Adoor becomes Kerala's first-ever recipient of the Phalke award. Par for the course. 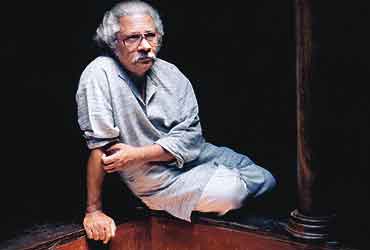 outlookindia.com
-0001-11-30T00:00:00+0553
Adoor Gopalakrishnan lives very much in the present, crafts exquisite cinematic essays about the past and is assured of a permanent place in Indian cinema's future. The Dadasaheb Phalke Award conferred on him is only another official recognition of the timeless quality of his small but outstanding oeuvre.

Time plays a pivotal role in his cinema. "The present is too close to us to be fully comprehended and the future is uncertain. Only the past is tangible," says Kerala's first-ever recipient of the Phalke award. "But the past," Adoor hastens to add, "has no relevance unless it impacts the present." His work, of course, has the power to transcend time. So much so that 64-year-old Adoor has attained with only nine feature films the sort of stature the less talented take three to four times that number to achieve. No film personality has ever won the Phalke award for fewer films.

The award is usually given to personalities on the verge of superannuation. Adoor is aware of that and is, therefore, a tad surprised that his name is already on the hallowed roster of Phalke awardees. "This award was completely unexpected," he avers. "It was the last thing I was expecting at this juncture." Could this, he wonders, be a reminder that he is getting on in years? He says, "My first grandson was born the other day. Becoming a grandfather was the first warning that I was getting old. Winning the Phalke award is probably the second."

But retirement is far from Adoor's mind. The silver-haired master of moving images does however love to keep the world on tenterhooks. He made his last feature film, Nizhalkkuthu (Shadow Kill), three years ago but seems to be in no haste to plunge into his next. "I'm under no pressure to get on with my next feature," he says. "That will happen when I feel the urge from within. That, in turn, will happen when the time is ripe."

Since he debuted with the groundbreaking Swayamvaram (One's Own Choice) in 1972, Adoor's made only eight more features. He believes the process of a film's evolution is no less important than the film itself. That perhaps explains why only two of his nine features—Mathilukal (Walls, 1990) and Vidheyan (The Servile, 1994)—are literary adaptations.

"I prefer to build upon my own ideas," he explains, "because I really savour the organic growth the idea goes through as it evolves into the final film. A ready-to-film script based on an existing literary text does not give me the freedom I seek."

No wonder Adoor's cinematic idiom is entirely his own. His meticulously crafted films are governed by an unfailing insight into the human mind in general and the recent history of Kerala in particular. In his formative years, Adoor inevitably fell under the influence of the East European masters, as also Ray and Ghatak. But it became clear quickly enough that he was too distinctive a filmmaker to build his career on borrowed ideas and styles.From Swayamvaram to Nizhalkkutthu, all his films hinge on adroit psychological probing rather than on sweeping dramatic thrusts. Understatement anchors his craft. While Swayamvaram deals with a pair of lovers who begin a new life together without the sanction of marriage only to be bogged down in the quagmire of poverty, Nizhalkkuthu is a poignant study of an old, infirm hangman grappling with guilt.

Artistic and technical consistency mark Adoor's cinema, be it the episodic Kodiyettam (The Ascent), the evocative Elipathayam (The Rat Trap), the trenchant Mukhamukham (Face to Face), the elliptical Anantaram (Monologue) or the emotionally draining Mathilukal. Is Adoor satisfied with the popular response to his last film? "I have no reason to be discontented," he says. "Of the 10 theatres where Nizhalkkuthu was released in Kerala, it ran for over a month in five. I received reports that audiences watched the film in complete silence and enjoyed its nuances. Would they have done so if they hadn't liked the film?" But hasn't support for his kind of cinema dwindled in Kerala? "Not all my previous films were big commercial hits. The degree of success varied from film to film. Things have changed in recent years but Nizhalkkuthu wasn't a washout," asserts Adoor.

Another domain that has undergone significant transformation, and not necessarily for the worse, is the Kerala film society movement, which Adoor pioneered on his return in 1965 from the Film and Television Institute of India, Pune. "Today, people don't watch films. They watch DVDs," he points out. "DVDs of most classics," he adds, "are now easily available. When I visited London last, I picked up 50 great films in DVDs for the Kerala Chalachitra Academy, which now has two DVD projectors. Watching and distributing good cinema has become far less cumbersome than it was in the early days of the film society movement."

Adoor is uncharacteristically prolific with documentaries. He has over 30 of them to his credit. "All the non-fiction films that I've made in the last 20 years or so have been on the performing arts," he says. The auteur has just wrapped up Kalamandalam Ramankutty Nair, produced by the Sangeet Natak Akademi. The 73-minute cinematic ode to the legendary Kathakali guru comes six years after Kalamandalam Gopi, a documentary on an exponent who learnt his craft from Ramankutty Nair.

"Ramankutty Nair had performed briefly in the previous film," says Adoor. At that point itself, he had found it odd that he was making a film about the disciple first. Perhaps by way of recompense, Kalamandalam Ramankutty Nair runs a full 30 minutes longer than Kalamandalam Gopi. "The pace of the film is unhurried in order to bring out the nuances and moods of Ramankutty Nair's art. The actual Kathakali performances run their course and speak for themselves," Adoor explains.

His next film, once again a documentary, promises to be of a similar nature. He has tied up with France-based Mohiniattam exponent Brigitte Chataignier for a long documentary on the dance form. "The film will seek to provide viewers with an experience of Mohiniattam," says Adoor. "It has been co-written by Brigitte, who spent years in Kerala to learn Mohiniattam."

Adoor's passion for Kerala's classical dance forms stems from his upbringing. Born in a family of Kathakali patrons, he grew up watching Kathakali performances from his mother's lap. "These films help me stay in touch with my cultural roots," he says. The first film he made on a Kathakali maestro was in 1974."It was an 18-minute tribute to Guru Chengannur Raman Pillai," he recalls. "Back then, documentaries were never longer than 20 minutes." Guru Chengannur performed for the camera in person though he was well past 90."He passed away four years later," Adoor reveals. "The film's become a precious record of his craft." For Adoor, cinema is a triumph over time.

(Saibal Chatterjee is a film critic.)