A Dollop Of Dalia 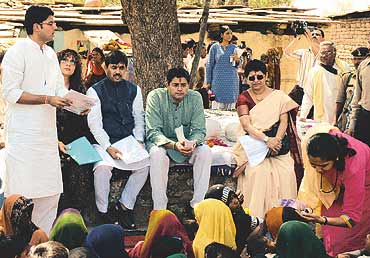 outlookindia.com
-0001-11-30T00:00:00+0553
For anganwadi helper Munnibai of Neem Chandoba, an adivasi village in Gwalior district, it was a wake-up call. Literally. Napping at 11 am on the floor of the anganwadi centre, she was jolted awake by the voices of strangers. Among them were five MPs—Sachin Pilot and Prema Cariappa of the Congress, Shahnawaz Hussain of the BJP, Supriya Sule of the NCP and Jay Panda of the Biju Janata Dal. Also, singer Penaz Masani, actress Gauri Karnik, journalists and UNICEF officials. The "masterni" who ran the centre was missing, so were her supposed wards—60-odd children. The MPs, who looked at records and questioned the hapless helper and her fellow villagers—mostly landless members of the Sahariya tribe—found that kids hadn’t been immunised for the past year; that their weight records were missing, and four bulging sacks of dubious-looking snack food had been lying unopened for four weeks.

The faces of district health officials tailing the motley group grew longer and gloomier as this surprise visit to one of the country’s 7.8 lakh anganwadi centres turned into a graphic illustration of that oft-heard phrase, "failure of the delivery system". But, for a new MP-led, UNICEF-supported ‘Citizen’s Initiative’ that says it has been galvanised into action by the shameful findings on malnourished children from the latest National Family Health Survey, it was a fitting start. Poor monitoring and lack of accountability in the Integrated Child Development Scheme (ICDs), of which anganwadi services are the pivot, are not the only reasons why 46 per cent of Indian children remain undernourished (a figure virtually unchanged from six years ago). But they are vital ones. The young MPs, who stressed during the train journey from Delhi that their bipartisan pressure group wants to get beyond Delhi committee rooms and grapple with the ground realities of malnutrition, got reality alright.

In Madhya Pradesh, which has the country’s highest percentage of malnourished children under three, reality is hard to avoid—even when it comes disguised, as it did at the next village. Rampura, also Sahariya-dominated, was well-prepared. This was clear from the welcoming thalis, the mattresses laid out under trees, the weighing machine dangling prominently, the agile gyrations of the elderly anganwadi incharge, Rani Sharma, who played with her clapping wards, and said that she had fed them rava ki kheer (semolina pudding). "This is a put-up job," said Sule suspiciously, and she was right. It only took a few conversations—and some telling statistics, such as 96 underweight kids out of 102—to get a bitter taste of the truth.

"Kasam khake bolo ke maine tumhe dalia khilaya hai," (swear on oath, whether I feed you all porridge or not), was Rani exhorting the mothers of kids an hour later, after the nutrition question had been discussed threadbare by the visitors and villagers. I feed them everyday, she insisted—two scoops each, and I mix sabzi (vegetable), sugar or salt with the dalia. Not everyday, not two scoops but just one, of plain dalia with no seasoning, retorted the mothers. The MPs listened and sifted the evidence: bad news, but perhaps not as bad as the previous visit? As Panda pointed out—one scoop of dalia is better than none—and children were being immunised.

But there was more to be learnt. From a clump of makeshift huts inhabited by newcomers to the village—desperately poor migrant tribals in search of work—who did not access even these faltering services. From a young Sahariya woman, educated up to Class 10, who had run this anganwadi before being removed from her post, to make way for Rani, a Brahmin from another village, apparently because the local MLA shared Rani’s caste. But when Pilot asked if the tribal woman should be reinstated, he got a complex reply. It’s because the Brahmin woman has the job, he was told, that we get the little we get. Remove her, and even that might disappear. 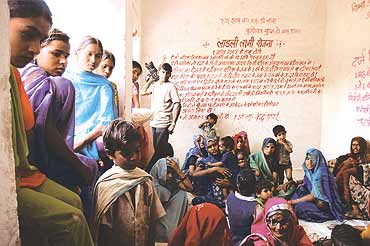 On to another village, more prosperous, higher up the caste ladder, and ergo, with a better functioning anganwadi. And therefore, more lessons to be learnt. Then, a post-mortem session with the district collector, followed by searching questions from the media. Standing by their commitment to bipartisanship, the MPs avoided shrill condemnation of the state government. The failures, it stressed, were distributed across the political spectrum. They also shielded Hussain, whose party rules MP, from embarrassing questions by Gwalior journalists. So far, so good. But what next? For a start, many more field trips, it appears, to other states. Other young MPs are slated to join in, such as the CPI(M)’s Mohammed Salim, bsp’s Brajesh Pathak, and nominated MP Shyam Benegal. "Concerned citizens" from other worlds, too, including actresses Nandita Das and Sushmita Sen, industrialist Gautam Thapar, artistes, NGO heads, sportsmen...

To what end? "The figures are shocking," said Pilot. "We want to start a campaign, make this invisible issue visible, to do what we can to shift the allocation of resources, and help make the system more accountable." "And to work as a focus group in Parliament," added Panda, "so that we all speak on it with the same voice." Said Hussain: "Weddings are news, malnourishment isn’t, we want to change that." "We’re here because we feel passionately about this," said Sule. None of this adds up to a gameplan, yet the good intentions are evident.

After all, sincerity is one thing that’s been lacking. For instance, despite several Supreme Court orders to universalise the ICDs programme, funding has been woefully short of requirements. "But malnourishment of children is a very complex issue, involving cultural practices, food habits, access to health, hygiene, water and mother’s health," points out National Advisory Council member N.C. Saxena. "It’s an issue that requires conceptual clarity." Therefore, he stresses, it’s not enough to form a group, the group must be clear on what they’re proposing. "Once they’ve made their field visits, let them produce a signed note on what they think the government should be doing. And let them involve civil society in taking up a block, or even part of a block, and turn it into an island of success, to establish best practices, and show how to sustain them." Sustain, that’s the key word.

Children Of An Equal God