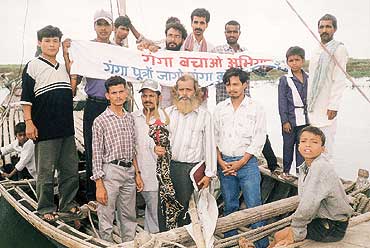 Deepak Kumar
Amarnath Tewary July 09, 2001 00:00 IST A devotee strives to save the Ganga from the garbage pit it is today

outlookindia.com
-0001-11-30T00:00:00+0553
For Bihar’s Vikas Chandra, a brief visit to Patna to meet his parents in 1997 was an eye-opener in more ways than one. Till then, this middle-aged bachelor by choice was content with life—he was fairly successful as a political science lecturer in bbn college, Bagaha, West Champaran district; he was proud of his spiritual leanings and he believed in the beauty of all things earth-born. In short, he had nothing to complain about in his life.

But the Patna visit changed all that. Says he: "I was shocked to see how the river Ganga had been reduced to a nala fed on untreated garbage and sewage water. There was nothing sacred about it. After all these years, it had even moved away from the city." All this despite the Rs 400 crore grant for the Ganga Action Plan started by the late prime minister Rajiv Gandhi in 1986. Since then, laments Chandra, the state government has done nothing but set up three treatment plants, two of which are now defunct and a crematorium at the Bans Ghat.

Chandra now had a new mission in life—to sensitise Patna residents to the need to clean up the holy river. Says he: "I knew I was threatening to unseat a deep-rooted malaise in our society. The task of cleaning the holy river and bringing it back to its original course was nothing short of a fight." His worst fears came true soon—he started receiving threats from babus "involved in siphoning off money from various government schemes in the name of cleaning the Ganga". And then, to top it all, he was even intimidated by workers of the morgue at the Patna Medical College Hospital. "They were disposing of the bodies in the river and when I protested, they threatened me with dire consequences. ‘Don’t try to become another Baba Amte or else we’ll do your post-mortem also,’ they said," recalls Chandra with a smile.

Undeterred, his mission continued. And the beginning was anything but encouraging. Chandra sat on a 48-hour fast in Patna to highlight the problem; the response was lukewarm. He even organised a number of seminars, took out boat rallies and formed human chains in the capital to make citizens aware of his mission. But the river continued to bear the burden of its ignorant "devotees". Finally, Chandra formed the Ganga Bachao Abhiyan with help from some other like-minded friends like Umesh Kumar Singh, Babloo Srivastava, Deenanath Sharma and Capt Vijay Bahadur. Recently, he even organised a padyatra by schoolchildren in the city to highlight the problem.

Chandra has also filed a pil in the Patna High Court against the state, Central and various other departments, holding them responsible for the river’s deplorable condition. His efforts are now bearing fruit—the pmch has set up an incinerator in the campus itself for waste and garbage disposal and says that unclaimed bodies are being cremated within the campus itself instead of being thrown into the river. But Chandra is not convinced. Says he: "They are still throwing half-burnt bodies into the river."

A strict non-believer in the ngo-culture, this academician-turned-environmentalist has steadfastly refused to get the Ganga Bachao Abhiyan registered all this while. Says he: "I don’t believe in ngos because most of them do nothing but make money for themselves. I ask people for their direct cooperation for the cause and many have now come forward. I appreciate their physical, moral and intellectual support which is enough to sustain my movement." Understandably, Chandra is elated with the response—Ganga Bachao Abhiyan is fast turning into a mass movement. But he knows his struggle is unending. Chandra now plans to visit all cities and villages across the country along the riverbank to spread the message that it is indeed in our hands to restore the Ganga to its original pristine glory.