A Desert Fox In Tripoli 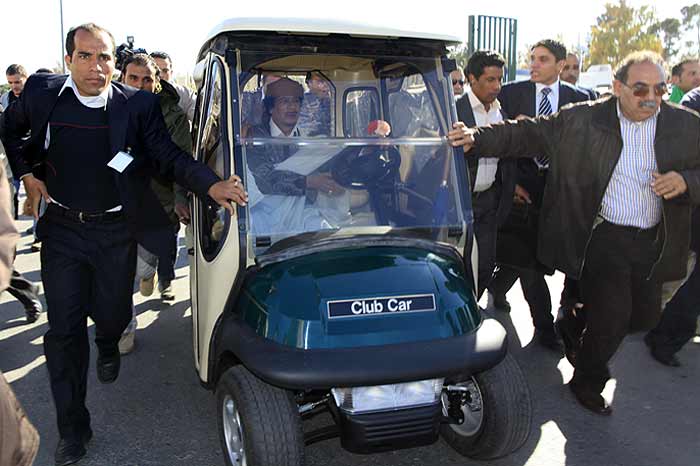 For a man who is supposed to be worth millions, you wouldn’t know it by his boots. He is one of the hardest people to meet in the world. So I expected to be taken to a secret location or perhaps a grand pavilion in the desert. Instead, our rendezvous was a seaside restaurant in downtown Tripoli. The sun was starting to slip over the horizon when I realised all the traffic had suddenly disappeared. Then there was a row of cars, lights flashing as they hurtled along the road. One pulled up and from it emerged Col Muammar Gaddafi, the world’s longest serving leader. His eyes were hidden behind a pair of gold Cartier sunglasses. His flowing brown robes gave off the light scent of sandalwood. A team of securitymen followed in his wake but there was nothing ceremonial about these guys. The famed female bodyguards were nowhere to be seen. He took his seat and spoke for more than an hour. “I don’t like money,” he said, “I have a tent.” His black leather cowboy boots tended to suggest he was telling the truth. The soles were cracked and pitted. The heels were worn. If he has millions squirrelled away, he’s not spending it on his shoes.

My first impression? He is not crazy. It was Ronald Reagan who famously called him a “mad dog”. After the BBC’s interview was aired, the US ambassador to the UN, Susan Rice, said he was “delusional”. His long rambling speeches on Libyan state TV have made many people question his sanity. But throughout the meeting he was confident, lucid and robust. But he’s clearly out of touch.