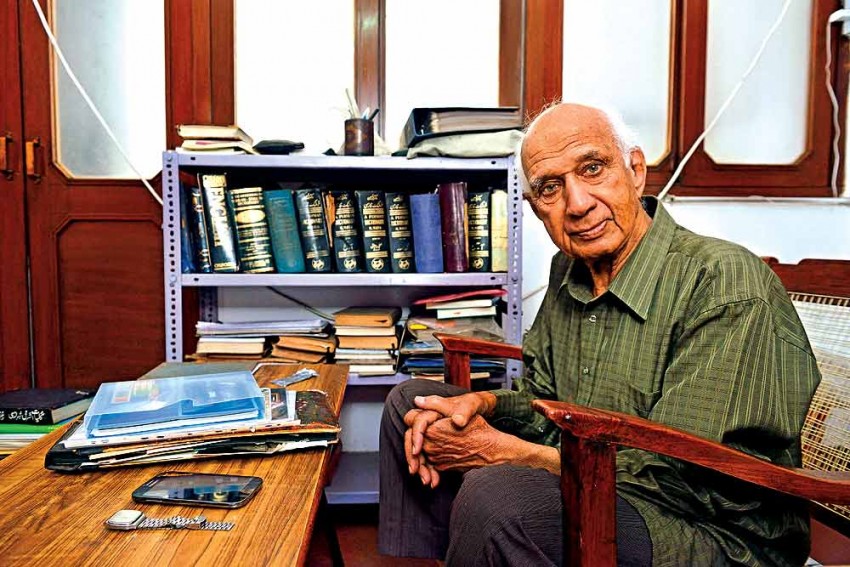 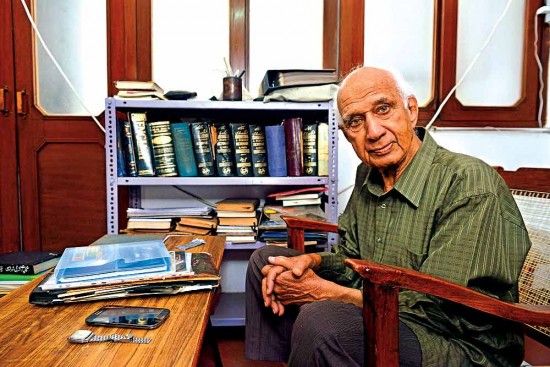 Blue-eyed and gentle of manner, Dr Syed Muhammad Yunus Jafari could charm anyone as a raconteur, till a few days ago, with his tales and anecdotes, his endless nuggets on the culture and architecture of Delhi, Agra and Lahore. This affable mien, of course, did not entirely reveal his true stature and the golden niche he occupied in the global circle of Indo-Persian culture. There was something falcon-like in his scholarly eye, the way he could sift out information from Persian and Urdu annals and join it to his evolving, composite vision. Over the three decades I was fortunate enough to know him, I never saw him pause or stop growing, despite the professional anguishes that sometimes dogged him.

Whenever I visited him, a few words of praise would infuse fresh zip in his voice...and again a caravan of rare facts and unknown nuggets. The praise was a matter of old-world grace, due deference to a titan: it came naturally to those who knew his life-work. The words of gratitude offered to him by other scholars in their works float out there like a chorus to his influence.

Madrasa-e-Ghaziuddin, the 300-year-old Anglo-Arabic school housed in the old building of Delhi College at Ajmeri Gate—which gave Dr Jafari a professional locus in the heart of old Shahjahanabad—had been a centre of Oriental studies much before the establishment of Delhi University in 1922. In June 1975, my father was to heed the advice of an Anglo-Arabic alumnus, Prof Shiv Rai Chaudhry (former head of the department of Arabic at DU), and hand me over to Dr Jafari, like a murid to his pir. Once I was in the safe hands of the guru, my father never had to come back to enquire how I was doing. Family and friends would teasingly call me ‘munshi’, alluding to the ancestral trade of many kayasthas. But, as I was assured by the great Dabir Siyaqi, a teacher of mine at Tehran University in 1978 (where Dr Jafari was instrumental in getting me a fellowship), the flag of Persian flew all the way from Greece to Georgia!

Discipleship with Dr Jafari was the key that unlocked the door to this world. He would introduce me at scholarly gatherings with a sense of possessiveness. Those hours spent in his room at the 18th century Delhi College building were invaluable. Even in summers, when no student would turn up, he would teach me the Shikasta script from microfilms. Just guru and shishya, teaching as a pure, engaged human act.

His literary and scholarly personality was multifaceted. The works that it gave form to encompass not only numerous aspects of Mughal culture, Iranian society and genres of Persian and Urdu literature but also sociological studies of the underclass. His knowledge of classical as well as modern Persian was superb. During conversation with Iranians, he could surprise them with modern, proverbial Persian, even slang.

He focused on the Persian literature of Shah Jahan’s period, specially on the poetry of Saib, a poet of the Safavid court who came to India in the period of Jahangir. The works he left unfinished take you to the core of Persianate Mughal literature. Among them was the editing of Padshahnama-e-Qazvini (1636), the first visual history commissioned by Shah Jahan. He already had under his belt the Padshahnama-e-Jalala Tabatabai and Chahar Chaman of that great Mughal era poet and prose stylist, Chander Bhan Brahman. At the same time, his insight into Mughal architecture could make you wonder whether that was his real metier. In fact he loved masonry, and he once told me that, as a young man he himself completed work at home when a mason didn’t turn up for three days. The mason was astonished at his handiwork, done too with the lakhori brick. His life in the world of letters, likewise, was an edifice built by his own hands.

(Prof Chander Shekhar, of DU’s department of Persian, is a visiting professor at the Institute of Oriental & Islamic Studies, University of Bonn, Germany.)

Prof Jafari had an eye for the underclass—peons, watchmen, errand-runners and the like. Some of his articles on people from such professions can be read in Mushk-e-Khutan, Dilli Kitab Ghar, 2014.