Britain rages; the News Of The World perishes; Murdoch manoeuvres 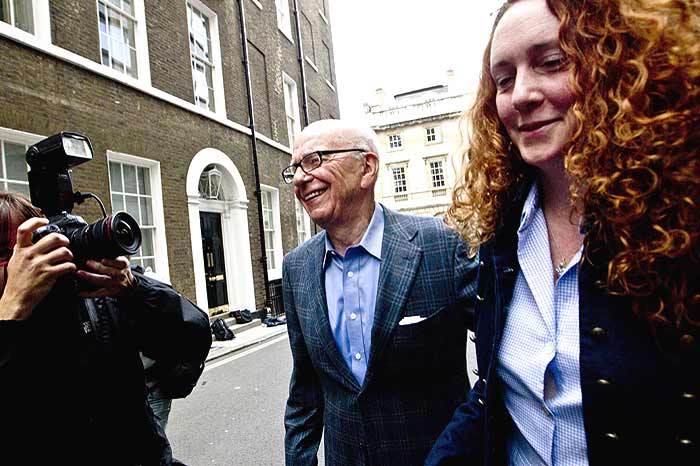 It’s a very British scandal indeed: a seedy tale of slimy journalists, dodgy coppers, the royal family, actors, a press baron and, unmissably, the political class. In fact, it has the perfect blend of salaciousness and high criminality for a front-page scoop in the very publication at the centre of the whole stink—the News of the World (NOTW), which published its final edition last Sunday, July 10, after a scandal over alleged phone hacking by some of its journalists over the years.

Staff said the atmosphere on the final day ranged from funereal to defiant. The day the closure was announced, many were spotted in a nearby pub singing It’s the End of the World As We Know It by REM, fighting off anger and tears. The paper prided itself on its fearless irreverence, but often it lurched into spite. As Brian Cathcart, professor of journalism at Kingston University, told Outlook, “There is a market for bad journalism almost everywhere in the world. It’s a matter of ethics. You can sell the bad stuff, but should you do it?”

“It’s about power....It’s reasonable for us to observe that the Murdoch corporation has too much power.”
Nick Davies, Journalist, Guardian

The scandal passed up the chain: the NOTW is owned by News International (NI), which is owned by News Corp, which is owned by Rupert Murdoch—the most influential media magnate in Britain, nay, the English-speaking world. The closure of the NOTW was seen as an attempt to salvage the tycoon’s bigger prize, News Corp’s acquisition of the broadcaster BSkyB. But that bid was withdrawn, as politicians, other media and, most significantly, the public spewed their fury.

The NOTW was closed down after the Guardian published several damaging stories about the paper. Chief among the NOTW’s damning acts was evidence that the paper had hacked the mobile phone of a murdered schoolgirl, Milly Dowler, while she was still missing. Further stories accused the paper of hacking the phones of the families of victims of terror attacks and those of soldiers killed in combat. The public mood went from one of mildly amused detachment to one of genuine rage. Charlie Beckett, director of Polis, the London School of Economics media think-tank, told Outlook, “It touched a raw public nerve because the victims were innocent people, not celebrities or politicos”.

As advertisers withdrew their support and prime minister David Cameron announced both a judicial and parliamentary inquiry, Rebekah Brooks, the NI’s chief executive, announced the NOTW would close. Speculation was rife the paper had been shut to insulate Brooks, a protege of Murdoch’s, second only in his affections to his own family. She has been at his side for over a decade, first running the NOTW and then its flagship daily sister title, the Sun. Brooks cryptically said that in a year’s time, the staff would know why she had not resigned, despite the Dowler saga occuring during her watch as editor in 2002. But Claire Enders, CEO of Enders Analysis, a media business consultancy, says, “It was a business decision pure and simple, to kill a product that advertisers would not touch. When that happens you have to be ruthless.”

The tentacles of the scandal tickle different spheres of public life—several Metropolitan police officers are accused of accepting cash for information from the NOTW; Andy Coulson, who resigned as the paper’s editor after the first hacking charges surfaced in 2007, was until earlier this year the British PM’s head of communications; and, worse, the shocking insight that Murdoch’s empire could have such a nefarious influence over society. The Guardian’s investigative journalist Nick Davies says, “It is about power, and the way power elites look after each other. And I think it’s reasonable for any of us to observe that the Murdoch corporation has too much power.”

Among all the drudgery and shame, an unlikely hero emerged—the actor Hugh Grant, who wore a wire to record a former NOTW journalist admitting just how common phone hacking was at the paper, for an article in the New Statesman. Davies had also persevered over four years despite the NI’s claims that the hacking controversy of 2007 (which saw the NOTW’s royal editor Clive Goodman use the private investigator Glenn Mulcaire to procure mobile phone details) was a case of the ‘rogue reporter’ acting on his own. On July 8, 2009, Davies revealed the NI had paid out over £1 million to settle legal cases involving allegations of phone hacking. Commentators asked: why do this if the Guardian’s allegations had “no substance”. It also emerged that the medical record of former British prime minister Gordon Brown’s son, Fraser, who was diagnosed with cystic fibrosis, was hacked by the NI-owned the Sunday Times and the Sun. The nickname ‘the street of shame’ has never seemed more appropriate for the cut-throat world of Fleet Street. As Beckett says, “Public opinion really does seem to be in favour of stopping the worst abuses of press behaviour.”

What’s next for Murdoch? Now a political pariah, closing the NOTW was the ultimate queen sacrifice, jettisoning a golden goose to ensure the game continued. But even that game has extra latitude—the withdrawal of the BSkyB bid is being seen as an attempt to placate the US Senate, which has threatened News Corp with the harshest legal and financial penalties if it emerges any US citizen’s phone was hacked. Plans have been mooted for the Sun to produce a Sunday edition. Is it just a rebranding exercise or will there be a genuine change in culture? A new newspaper, says Cathcart, will make the closure of the NOTW seem like a “sleazy false act of atonement”. What about Brooks, and Murdoch’s son, James, who heads News Corp? The key impact is on the succession, says Cathcart. “Rupert is old, James is the nominated successor and he has made a mess. Shareholders have to judge where that leaves the company.”

Murdoch’s unpredictability makes him as dangerous as his conviction—this is after all the man who single-handedly took on the British print unions and won in the mid-1980s. But in the past week he has morphed from the swashbuckling media tycoon who anointed prime ministers and presidents to a betrayed warlord, belligerently sipping velvety whiskey. What he will do next is unclear; as Enders says, he never does what anyone advises him to, and never has. And he has repeatedly shown disdain for sentiment and has no sympathy for human fallout. A bit like a savage scoop in one his papers.

Was There A Choice?