A Decade On A 70mm Screen

The ’50s wasn’t a placid pool of idealism. In grappling with the Partition and forging a new polity, it fashioned modern India. This wide-angle view serves it well. 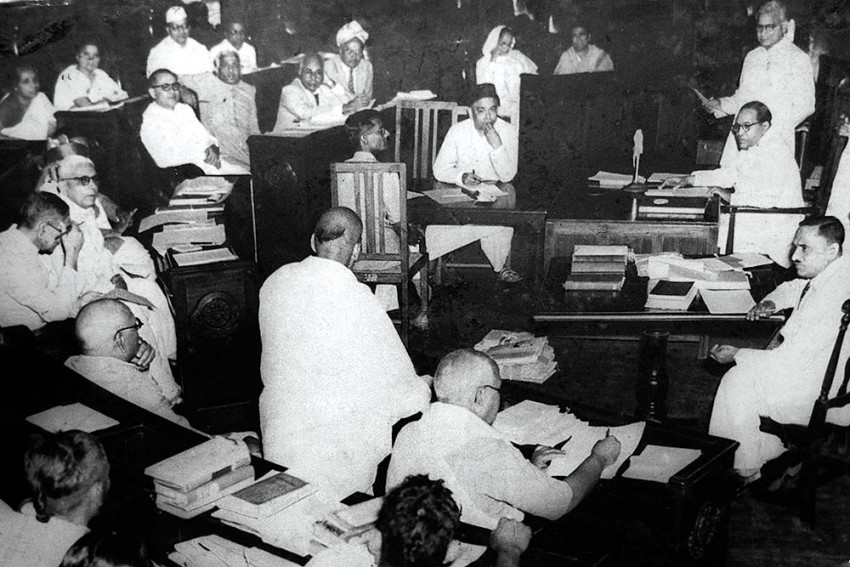 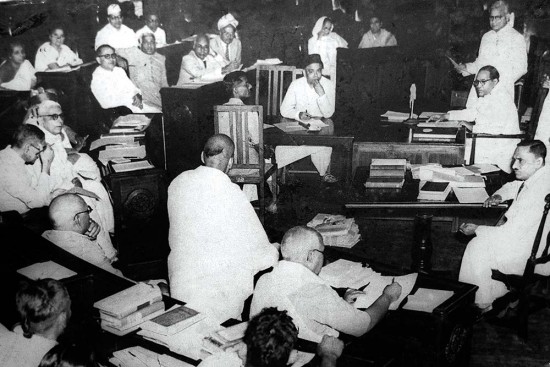 If tectonic events—transformative at the ‘deep structure’ level—are to be privileged as markers of time, the “long decade” offered in this book is beyond reproach. The twentieth century, they say, was properly born only in 1914, kicking and screaming like Stravinsky’s pagan sacrifice. And collapsed into clouds of anomic dust on 9/11. Here, we get the “1950s” as a five-act play that begins in the night-infused dawn of 1947. When the curtains go up, it’s midnight actually: a modern nation is in its first rites of passage, and it’s astrology that decided on that cusp time of August 15 as its birth date. With that founding irony hanging in the air, the ‘founding fathers’ are writing a new genetic code, fretting and arguing over its inner grammar, even as millions of refugees stream in from east and west.  And it's the 1962 war (not its details, nor its genesis, just the date) that provides the coda.

But the temporal canvas, and how the embroiderer’s hoop circles out a portion of it for concentrated work, is not the point of emphasis. The five chapters are not dedicated to blocks or sub-units of time within this frame. They are, rather, arranged thematically. The first one is a study of the refugee crisis of Partition. Not at the level of human tragedy, but at how the system coped—a State in its infancy being baptised through a challenge unprecedented in history.

Three elements stand out here. One is how the successful resettlement of Punjab refugees across the north, culminating triumphally with the imagining of the new city of Chandigarh, contrasts with the mess in Bengal—where the event horizon (it’s a ‘long Partition’ that stretched over a decade) and economic particulars (the ‘unending trail’ of refugees in the ’50s are largely from the underclass) offer a substantially different set of problems. Second, how the situation of Muslims left behind in India—fearful and profoundly uncertain of their future—forever alters the terms in which minority rights will be articulated. (An under-appreciated fact: Muslim leaders in the Constituent Assembly voluntarily surrendered the benefit of separate electorates.) Third, how the spectre of fragmentation bled into policy and Constitution-writing, creating a ‘unitary bias’: India would be a Union of states, with a strong Centre, rather than a ‘federation’.

Chapter two looks at the intense work that went on for years in the cartographer’s lab: from the ‘butcher’s job’ of Radcliffe that offers the outline, to Patel’s immense mission and “Pericles-like statesmanship”—flexible of tactic, unbending in overall strategy—that harnesses the interiors, to how language willy-nilly provides the impetus for the final reorganisation of states in 1956. Brief movements dwell on the great counterfactual of our times—‘what if Patel had been PM?’—his dissenting position on Kashmir, including his openness to it joining Pakistan, and on how the lesser known massacres of Hyderabad, Junagadh and Alwar-Bharatpur complicate the narrative of integration as a ‘bloodless revolution’.

Chapters three and four span the gamut of themes that animate discussions even today: democracy, citizenship, secularism, caste, language and how the political landscape—the Congress ‘system’ and a small but increasingly vibrant Opposition—negotiates these questions, an evolving, cooptive State extending itself to assimilate each note of dissonance. The last chapter looks at economy. We see the rampant inflation and famine of the War years instigating the ‘Nehruvian consensus’ on enhanced State control (one view even favours a “blanket control on all prices”). We see the inception of centralised planning: the focus is set intently on agriculture first (some of the biggest dams of Asia leap to life from the blueprint), and then Mahalanobis resets it to industry to build those steel cities (a scientist, not an economist, it’s his pioneering work in statistics that brings him in).

We also see the larger, extra-economic factors as being constitutive of this frame. For, Nehru had another motivation—he saw central planning as a key component of the integrative principle. For him, a vision that thought of all India at once, and stressed on the “interrelation of one part of India with another”, would have a “psychological appeal” and lead people away from “the crooked path of provinicialism”. The same way the EU brought about a way of thinking about Europe, or indeed as GST does now—going beyond pure considerations of the ‘market versus state’ debate. At each stage, the policy choices are historicised and set in context—whether it’s Constitution-making or the socialist turn.

For all the richness of detail that gets woven in, this is not an aggregate of micro studies. This is not the go-to book for a lowdown on Sikkim or Goa—or the Nagas and Kukis—in the 1950s. There’s no Tebhaga, no Punnapra-Vayalar either, and just a fleeting reference to Telangana. Kudaisya’s camera is set to landscape rather than portrait. Detail appears as illustration, say, of the linguistic problem or the Partition aftermath. It’s the big picture that concerns the author, the institutional processes that stabilised India, the confusions, the disputations over each area of overarching policy—a sketch of what it took to put in place a whole lot of things we take for granted. Nehru’s foreign policy is beyond its remit too…so no Bandung, no Panchsheel.

But to an extent, without overtly saying so, the subject position is that of Nehru. To that same extent, this book owes its spiritual lineage to scholars like Sunil Khilnani and Ramachandra Guha—a line often criticised for preferring an affirmative picture and eliding the flaws. The criticism emanates from all sides these days: the right wing that excoriates the ‘left-liberal’ line for not being Hindu enough, the Ambedkarite school that flays it for being too Hindu and savarna, and a sort of floating ‘post-national’ mood that prefers the Perry Anderson line of Nehru-baiting (with a strain of India-denying thrown in). The book betrays no direct awareness of these, much less engage in direct polemic—or indeed, accept genuine points of criticism. They exist only as an implied hinterland against which Kudaisya sketches his gentle assertions. By depersonalising his book to some extent, by making it about the processes, he largely evades the Nehru debate. But tacitly, pixel by pixel, a favourable picture of an institution-builder is offered to us. Nehru’s letters to the chief ministers get full play, as the gift of a fair, federal-minded benevolence—his dismissal of the EMS ministry earns just a pro forma mention.

The nation-builders did have a mammoth, complex task—of evolving theory on the hard ground of praxis, while the khichdi was still cooking. The book’s ideological heart seems aligned to that mission. In the aftermath of Partition, identity is a ‘problem’. Rather than access it through caste (which would reveal a genuine canker on the body of democracy), the idea is explored via language—where the sense of fractiousness is more easily demonstrated for an India yet to solidify. And Ambedkar gets a diminuating treatment (his pen portrait is oddly paired with Rajaji’s). He gets an approving mention when he contributes to the integrative principle by arguing against linguistic division—one of the paths not taken on the road to ‘vernacular democracy’, an unfortunate coinage. Overall, though, this will serve both as an expert summation of how India’s formative infrastructure was laid amid near-constant firefighting—no reader will ever again look at the ‘50s as a placid decade of romantic films and tender songs—as well as a fine gateway book.

In Punjab, Another Decade, Another Scam