A Couple Of Syllables 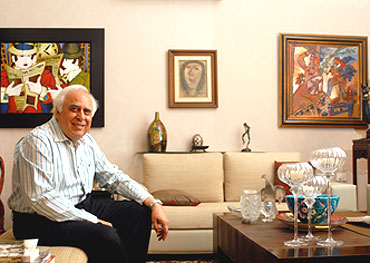 Kapil Sibal is no poet. By his own admission, the Union minister for science and technology is a man of the world who dislikes poetry. It's too "difficult" and "subjective" for his reading taste. Nor does he have any patience with the "paper-crumpling" and the endless scribbling and revisions that the vocation requires. And, judging by the acknowledgements in his first book, I Witness—Partial Observations, it took a battalion of relatives, friends, writers, editors and assistants to induce the man into labour. So why on earth did one of the finest minds in the legal profession and in the Congress party succumb to publishing—of all the many weighty books brewing for so long—a collection of poems?

"I think poetry is a fabulous medium to encapsulate thoughts far more precisely than prose," Sibal says, without a trace of diffidence or embarrassment. "You can deliver the message far more subtly—and succinctly—than prose." He points to his poem on POTA (Prevention of Terrorism Act) as a shining example of both. "The whole argument on POTA, both the pros and cons, are reflected in the poem." And, he adds as a clincher, "It's only two pages long."

There's another reason, of course, why the poems are so mercifully short—they've all been composed on the screen of his cellphone, as SMS texts. "One day while on a two-and-a-half-hour long flight, I put my cellphone on offline mode and started entering random thoughts," he recalls. For Sibal, a recent convert to all forms of new technology, it was an "open sesame" moment: "I had been wanting to write for a long time, especially after being exposed to a wide variety of issues, not only matters of public concern but things that have agitated my mind over the years." Here at last was a way of writing down "the thoughts cascading through my mind"—his views on everything ranging from politics and politicians to the judiciary and press, capital punishment and terrorism—without resorting to what he calls the "writer's props": sitting down at a desk, going to the trouble of consulting books, and revising. "It's so easy to erase what you write!" he marvels. Soon, poems ranging from his views on tsunami (three pages), on the infamous confidence vote last month (four pages), inflation (four pages) and bio-technology (one page) flowed fast and furiously. "That's what technology does to you—makes you lazy but allows you to innovate," Sibal says.

So how did a Luddite like him, a man who has "never done science in my life", end up waxing eloquent about stuff like geospatial technology, biotech and nano, stuff he now hails as the "future of the world"? "You learn on the job," he says. "When I was a young lawyer and got a case, I knew nothing about the subject. You start reading, you look for the philosophy behind it, and by the time you are actually in a court of law, you are a master." That's how he learnt about technology as well, says Sibal, by "calling meetings, sitting around the table, understanding the issues and putting my questions as an ignorant person."

For an ignoramus, he can reel off the jargon like a pro. In verse, at that:

But there's no disputing he knows his stuff: ask him what a nano is, and he can tell you it's one billionth of a metre, and how the chemical nature of an entity changes in nano form, and how this can be put to multiple uses, from self-cleaning windows to using nano tubes to deliver medicines to individual cells of the body, to nano sensors and satellites orbiting the earth. Sibal's enthusiasm for new technology is almost infectious.

Take the advances in geospatial technologies—a term that would no doubt have numbed his non-techie brain till he took over his new job as minister four and a half years ago. And now he can trill:

Geospatial images in
digital mode display
enabling introspection
in a most effective way.

Why? "I'm trying to give it a push," he admits. "There's a big future for it in the world, not just in India."

Sibal says the infinite possibilities of this new technology came to him one day when he was discussing with officials in his ministry how to deal with unauthorised construction in Delhi. "You cannot rely on human beings to deal with it," he told his officials. "Why don't we have a technology solution to the problem?" That's when he heard for the first time how you can use satellite imagery and data on the ground in digital form. "Now you can sit in one room of the MCD office and the computer tells you when someone puts an extra window in his house," he exults. "By next year all land in Delhi will be mapped and you'll be able to calculate house tax of a building without sending an inspector. Through geospatial technologies you can plan a whole city sitting in your room."

Passion for his job apart, Sibal has another side to him that's rare among Indian politicians. He loves the good things in life: his collection of paintings—Souzas, M.F. Husains—is so large that he's run out of wall space and there are some priceless canvasses still stacked behind the sofas. The floor in his ministerial bungalow is covered with antique Afghan and Turkish carpets. And when he has the time, he rustles up a Chinese or Indian meal for his family and friends. "It's my way of relaxing, like writing poetry," he says. "I like to spend my time enjoying myself, (doing something) other than politics."

This work-life balance is something he's come to prize of late, especially since his second marriage to his long-standing companion, Promila. He's been through some hard times, he says, when his first wife, diplomat-writer Nina Sibal, died of cancer eight years ago. "In the ultimate analysis," he muses, "you need a partner. You can't lead the rest of your life alone." But thinking it—and wanting it—was one thing, and telling the world, especially his two sons, was another. "It takes time," he says philosophically. "In the beginning my sons were not okay with it, but they are more or less okay with it now."

It's a balance he's still trying to get right: "If I praise Promila too much, then my sons may not like it, and if I say too much about Nina, Promila may not like it." Which is presumably why there are two poems for each, because "these are the realities of life and I am a realist."

Gravy On His Fingers