A Coup At Chamundi 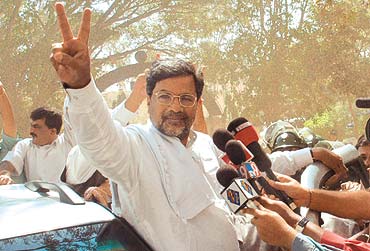 outlookindia.com
-0001-11-30T00:00:00+0553
Karnataka chief minister H.D. Kumaraswamy, who had declared several times that he was the "real" candidate for the Chamundeshwari bypoll, has emerged the loser. The defeat of the JD(S) candidate Shiva Basappa at the hands of the Congress and, more particularly, by former party colleague and backward class mascot Siddaramaiah, has the potential to shake the existing coalition between the JD(S) and BJP. The slim margin of loss or victory—257 votes—is inconsequential for the simple reason that fence-sitters in Deve Gowda's party were waiting for this precise moment to make their political move.

By way of preparation, a few 'secular' dissenters within the JD(S) like former industries minister and legislator P.G.R. Sindhia and Kerala MP Veerendra Kumar had raised the pitch for Gowda's expulsion only last week. Reason: betraying the party's ideology by endorsing his son's association with the 'communal' BJP ten months ago. This pitch, according to party insiders, is now going to reach a crescendo, which is likely to split the JD(S) with a majority of MLAs going with the Veerendra Kumar group. There is also a likelihood that some MLAs may look at the Congress option since their former leader, Siddaramaiah, is already there.

After the Bellary mining scam hit the roof, there have been rumours that the coterie around Kumaraswamy, which comprised mining giant and MLA Santosh Lad, had distanced themselves and had even met senior Congress leaders. "Most party MLAs perceive JD(S) as Gowda and Son's party where they have little future," says an insider. Even Mahima Patel, son of former CM J.H. Patel had launched a month-long 'silent protest' when he was denied a cabinet berth. All this dissent may now acquire a new life.

If KPCC president Mallikarjun Kharge interpreted the defeat as a "vote against the people in power," Opposition leader Dharam Singh told Outlook within minutes of the results, "The government will fall. This is a vote against the Gowda family rule. Many things will happen now. Political polarisation will take place." However, other Congressmen say a reasonable timeline to check the survival of the government is a week to ten days. B.L. Shankar, a Congress leader who was close to Gowda during his PM years, predicts, "2007 will be an election year for the state. There will be internal bickering and mutual distrust within the JD(S) and the coalition will crack." Deve Gowda could not be accessed for a comment. Kumaraswamy, in his usual brazen style, said there was no 'danger' to the government.

In the BJP too, a tectonic shift is expected. H.N. Ananth Kumar, who has been lying low, is now expected to return to the forefront. His supporters have already demanded that current state party chief Sadananda Gowda should not get an extension of term. Deputy CM B.S. Yediyurappa has also been painted as 'ideologically fickle'. So Ananth Kumar may now position himself as a person who can lead the saffron party in the next election. During the bypoll too, though JD(S) and BJP fielded a joint candidate, the BJP seemed to be disinterested in the campaigning. Now there is talk in the JD(S) that had the BJP campaigned seriously, Basappa would have won.

This bypoll victory is a gain for the Congress. Not because they are smelling power and luck seems to be smiling, but because the narrow margin of victory has ensured their heads will remain on their shoulders. "The morale is high but we can't be complacent," says Shankar.