A Concerto For Violence

The shock of 9/11 and the US military presence in the region might have helped pacify this turbulent zone; it hasn't. 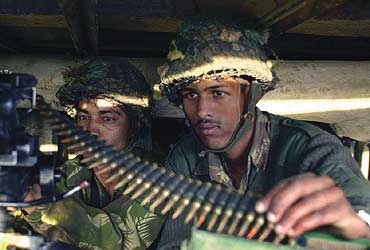 outlookindia.com
-0001-11-30T00:00:00+0553
The shadow of violence in South Asia has grown larger since the events of September 11 and the US-led "war on terrorism". The shock of 9/11 and the US military presence in the region might have helped pacify this turbulent zone; it hasn’t. Indeed, never have relations been more strained and the probability of violence higher. How did this happen? It happened because the Pakistani government, Kashmiri extremists and the Indian government had an interest in violence—in threats of violence or the actual use of violence.

Three developments, which might have been predicted (but were not), occurred in South Asia, more or less simultaneously. These were related, and culminated in the crises of December 2001 and May 2002 after the terrorist strikes on Parliament and the army camp in Kaluchak, respectively.

The first development was somewhat unexpected but not altogether unpredictable. As a result of its new frontline status, this time in the fight against terrorism, Pakistan grew stronger and bolder in its confrontation with India. At least four factors contributed to the change in Pakistan. One, from almost "pariah" status, it became internationally respectable. Two, with political rehabilitation came promises of economic aid to rescue Pakistan’s unravelling economy. Three, international recognition and aid shored up President Pervez Musharraf. His political consolidation was helped by the Pakistani people’s disillusionment with political parties and the palpable relief of civilian leaders after 9/11 that they were not at the helm in Pakistan. Four, ironically, the US war in Afghanistan at one stroke got rid of three strategic liabilities for Pakistan: Al Qaeda, the Taliban and indeed Afghanistan itself (contrary to some Pakistani claims, Afghanistan never added strategic depth for Pakistan). Overnight, Islamabad was free to focus all its attention and resources on ‘the great Satan’, India.

The second development also went against the grain of what might have been expected. Kashmiri extremists, rather than be cowed by the US presence in Afghanistan and Pakistan, became more provocative. The roll call of attacks in India says a lot: the Kashmir assembly in October 2001 (as US forces began their operations in Afghanistan); Parliament two months later (just about the time the Taliban had been destroyed); the army camp in May 2002 (with a quarter of a million Indian troops massed in forward strike positions); and the massacre of the Amarnath pilgrims last month (just as the international community thought the crisis in South Asia had been surmounted).

The third development, not altogether surprising either, was the Indian government’s decision to resort to brinkmanship so as to bestir the world community and the US in particular on its behalf against Pakistan. The growing political and economic rehabilitation of its old enemy, the resumption of strong US-Pakistan links, the consolidation of Musharraf’s rule and the unwillingness of the general to do anything serious about infiltration and terrorism galled India. The increasingly provocative attacks by Kashmiri extremists stirred Indian public opinion but, even more importantly, gave the government a chance to roil public anger up to newer levels of intensity. An angry public behind it, New Delhi sensed an opportunity. Its mobilisation led to a counter-mobilisation by Pakistan. With US troops on the ground in Pakistan and Afghanistan and nuclear weapons about, a crisis that would catch the attention of the world community was quickly produced.

The crisis in South Asia in the summer of 2002 was not New Delhi’s production alone; it featured the willing and able contributions of the Pakistani government and Kashmiri militants. The beauty of the situation is that all three parties have a stake in violence or the threat of violence as well as the catalytic power of violence. The Pakistani armed forces are strong and are not intimidated by Indian military power. In their view, a confrontation with India would serve to radicalise the situation in South Asia and could help bring the international community into the India-Pakistan quarrel as never before to achieve a historic Pakistani goal.

For the Kashmiri militants, almost untouched by the US war on terrorism, it is business as usual—and more: more violence, more bilateral tensions, more international attention on Kashmir and, for some, more Islamic radicalism. For the Indian government, the threat to wage conventional war and even contemplate nuclear war, if it should come to that, was a risky but controllable venture, one that would dramatise Pakistan’s role in Kashmir and India’s unwillingness to accept the US’ differentiation between "global" terrorism and mere "local" terrorism".

The US war on terrorism in Afghanistan has brought no respite for South Asia. Indeed, matters are worse than ever. Contrary to some estimations, India has gained little if anything by changes in Afghanistan or its own brinkmanship. Terrorism is not on the defensive or on the downswing. Indian forces are idling on the frontlines. The time that might have been spent in readying Kashmir for the elections and for negotiations on autonomy and a final settlement has been lost in the mobilisation crisis since December last year. And the international community’s pressure on Pakistan has not worked, at least in respect of Kashmir. It has not worked because Islamabad knows that India’s weaknesses are its strength and because engaging Pakistan is a strategic necessity for the foreseeable future.

In the topsy-turvy and tragic world that is international politics, South Asia, as so often is the case, finds itself in the midst of turvy and tragedy.