'A Commission Must Take All In Its Stride' 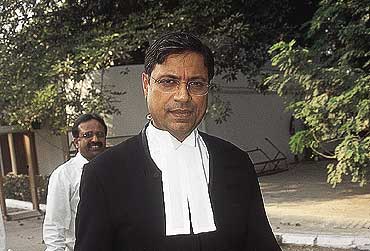 outlookindia.com
-0001-11-30T00:00:00+0553
Legal luminary Gopal Subramanium is no stranger to commissions of inquiry. Having served earlier as counsel for the J.S. Verma Commission—which went into the security lapses in Rajiv Gandhi's assassination—and the D.P. Wadhwa Commission, which looked into the killing of Australian missionary Graham Staines and his sons, he has his task cut out in his present role. In an interview with Outlook, he shares his thoughts on the challenges before the Venkataswami Commission which is studying the Tehelka exposé. Excerpts:

How does the commission view the return of George Fernandes as defence minister? Does it amount to pre-judging the commission's findings?
The commission is expected to work purely in a non-personal, institutional framework and must view all actions outside as extraneous to its mandate.

But surely this is a bad precedent on the part of the government? Is this action a blow to the functioning of the commission?
A commission of inquiry can often be and is intended to be the fulfillment of a public expectation—the people have the right to know the truth which is objectively ascertained so that wild and serious allegations do not float in the air. We are in a sense meant to replicate the same qualities of assessment as should be visible in a court.

But what about the morale of the commission's staff?
Whatever be the reactions that are expressed and whatever be the criticisms, a commission must be prepared to take all this in its stride and perform its job. The procedure we follow is partly inquisitorial but at the end of the day, a judicious appraisal of the material that comes before it is done.

How much work has been covered?
The job of this commission is obviously a challenging one. The time-frame that was initially set was pretty unrealistic. However, considering the progress made so far, it has been remarkable.

How many defence deals have you already looked into?
Rarely is a commission expected to go into 16 defence transactions and that too within eight months. So far, a considerable portion of work is over.

The Judge Won't Be Pre-Judged