It may well be their imagination come alive, but paranoia grips Delhiites over a monkey-man 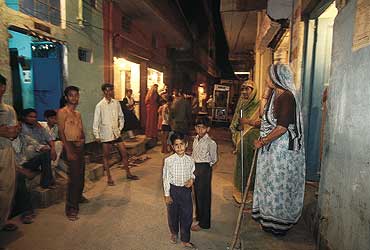 outlookindia.com
-0001-11-30T00:00:00+0553
It's a giant monkey. It's half man-half monkey. It's a man in black with red eyes, brass claws, a helmet, with a springboard that helps him leap over buildings. It's a woman in an ape's disguise. It's a voodoo spell gone awry. Instead of a prince—in a sudden and strange Darwinian twist—the man has been morphed into a monkey, or even worse, a half-baked one. It is the ghastly spectre that hangs over Delhi.

The capital hasn't slept peacefully for a week as absolute paranoia has seized the dark colonies and narrow bylanes of east and north-east Delhi. The "assaults" of this semi-simian marauder on a scratching spree has triggered mass hysteria, now engulfing the entire metropolis. The "monkey man" creeping up on hapless victims of the low-income bracket in the dead of night is now the city's sole talking point. Everybody, everywhere, everyday, is confronting this miniature King Kong and frenziedly dialling 100.

Overzealous Shiv Sainiks have already dished out their usual isi conspiracy theory to explain this monkey business. More hi-tech Delhiites are mulling over the possibility of a robotic invasion. They have in fact already chalked out a defence mechanism: water and light. Water will spoil the robot's internal mechanisms, and light it fears. Ergo, citizens have (wisely) demanded uninterrupted water and power supply to stave off the menace. Lest we forget, deployment of the Rapid Action Force, the army and the intelligence has also been sought.

All this would have been funny if not for the fact that at least three people have already died in panicked mishaps, and dozens have been beaten up by raging mobs on the suspicion of being the elusive ape.

"Chaliye, aaj aap bhi dekh lijiye yeh khel (Come, you also check out the fun)," Gandhinagar police station chief Mahender Singh tells me. Beat constables, wireless patrol vans and sub-inspectors on motorcycles all split up in groups. I travel with Singh in his Gypsy. It has been a long and arduous week for the entire team chasing the monkey man's misadventures. It's 11.25 by my watch although the thana wallclock suggests I'm running 10 minutes slow...

Examine them rationally and the facts readily appear inconsistent. Everything is unsubstantiated. The man's build, for example. The police peg him at 4 feet 6 while some fuzzy eyewitness reports claim him to be 5 feet 6. Actually his height, according to various hysterical accounts, varies from anything between 3 feet 5 to 8 feet. And frankly, height is hardly a moot point since many swear the creature has the magical prowess to change shape and size. No one's seen him clearly, nor have there been any leads to work upon. The fear though is so pervasive that anything that moves is suspiciously misconstrued as the deadly kaala bandar.

It is actually the three cases of death along with incessant post-sighting phone calls that are compounding the rumours. Never mind if the deaths had nothing to do with the monkey attack and occurred when terror-struck people panicked and fell down stairs or jumped from heights. What's worse, even a few doctors are vague about the whole episode, which in turn bolsters the rumours. "In the last three days, we have received 27 cases out of which, in 20, we have found scratch marks. They are from claws and it is all very confusing," says a baffled Dr D.K. Srivastava, medical superintendent at the Guru Teg Bahadur Hospital.

And wild stories there are aplenty. Says eyewitness Vinod Kumar Yadav: "It was a 5-feet 8-inch black monkey that grabbed me from behind, but below its waist, it was like a human.It had three-inch long nails and injured me in my lower back and elbows." Similarly, Ajay Kumar spotted a black arm in his in-laws' bathroom in Ajitnagar on Wednesday night and since then

hasn't dared venture that way. The tales are already enough to fill up a volume, but specialised doctors have dismissed them outright. "When we did a medical examination, every single injury of Vinod Yadav's turned out to be more than a day old. The doctors have clarified that they were not caused by any human, animal or monkey," stated dcp East Manoj Kumar Lall. Another "victim", Ranish Jain's injury was simple in nature and was due to a blunt object, not any claw.

...11:40 pm. Just 10 minutes into the game and we get the first call on the wireless. The monkey has been sighted in Kailash Nagar. A visibly shaken young man, Dinesh Verma, is surrounded by an excited crowd of neighbours. As Singh coaxes him to spill the beans, the man starts howling: "Mujhe upar nahin jana, woh hai (I don't want to go up, he's there)..." Who? A pair of jet-black hands that were about to throttle him. As we rush upstairs, I sense the collective terror. Ten minutes later, a rather irate mob kickstarts an animated discussion with Singh and his men who are trying to calm down passions. "Kuch na kuch to hai, sabhi newspaper, TV report to galat nahin ho sakte (There has to be something. Every newspaper, TV report can't be wrong)," insists Rehman, a local resident. Several drunks even start doling out suggestions. "He travels in a remote-controlled Tata Sumo, please check all the cars," suggests one. With a threatening afterthought: "Nahin to hum hi dekh lenge (Otherwise, we'll have to take charge)." Singh remains cucumber cool through this entire interaction but for me the sheer thought of a mob—whose sense of reason has reached breaking point—taking the law in its own hand is scary.

Considering the volatile situation, the police are not taking any chances. Moreso, as reports of fresh assaults are still coming in in droves. They are even doubling up as counsellors to explain that the spectre could actually be a figment of the imagination. The police commissioner has also announced a Rs 50,000 reward for any information on the simian shaitan.

"Twenty-two instances are currently under verification," said dcp north-east Vivek Gogia. These are cases either with some injuries or concrete sightings. The story is similar in the neighbouring east district where the police over the last four days have received 60 distress calls out of which only nine involved some injury. Although many senior officials would call it a 'pure public fantasy', a 23-member special task force has been formed to cater to individual cases. However, most personnel at the police station feel it's futile chasing this ridiculous rumour. "It is purely a socio-economic phenomenon. In these lower middle class clusters, it's very easy to spread panic. And that's why they are always the prime targets. These guys get their five minutes of fame before TV cameras, so they talk big and in turn aggravate the situation," says a police official. Adds dcp east Manoj Kumar Lall: "The fear has crossed all lines of sanity. Husbands are beating up their wives, mothers their children. Crowds were all set to attack one Praveen Kumar for possessing a pet monkey. This is sheer madness."

...We actually come face to face with such lunacy at around 1 in the morning. By that time the calls from Chameli Mandir, Ajitnagar, Rashid Market and Raghuvir Mohollah have all been dismissed as bogus.At 1.20 am, we are in Aaram Park where a Mitsubishi Voyager has been smashed to smithereens. A mob of 200 had attacked the car and its three passengers—Ram Singh, Om Prakash and Sanjay—thinking the infamous monkey was inside. It just took seconds for all hell to break loose and even less to demolish the car. I remain transfixed looking at the debris when suddenly I hear Mahender Singh shouting: "Hurry up, it seems they have blood stains in Jamunapur..."

The Year of the Monkey welcomes the 21st century in.