A Camera In Pandemonium 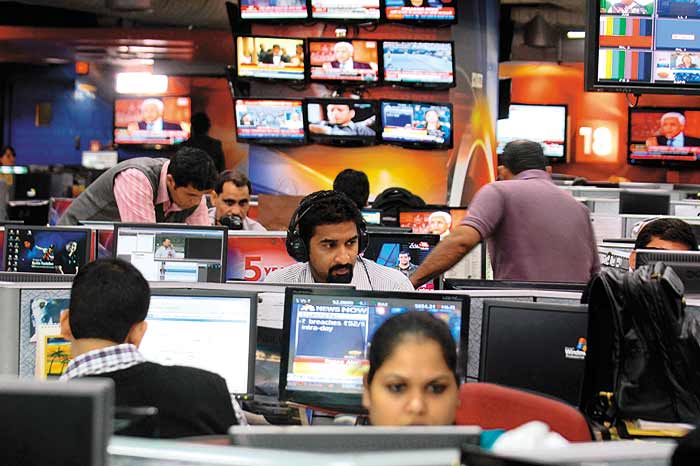 “If I see him on another channel it’s your neck!”

“No, too light-weight. This is now prime time.”

“Shall we move the OB from Diggy’s?”

“The first headline is wrong. SP is not inching ahead anymore. It’s blazing past. Be sharp, guys.”

“Please keep the headlines editors in the loop. They’re changing every minute.”

“Where’s Vicky? Why aren’t we going to him?”

“Then move him. Can’t you see the news is moving? SP is the story now. Please let’s get Vicky, it’s getting too much studio disco. We need to go out. Need OBs, need phonos, need bites.”

“That’s too much. Get him on the phone. We need gyaan on SP in western UP right now.”

“What’s up with the Uma tic-tac? It was uplinked ages ago.”

“Why are we getting the figures five minutes late? The others have it before us.”

“Check with graphics too. Are they taking too long to load?”

“Why is this Manu bite on air, guys? It’s from the last wheel, it’s not relevant anymore. Can’t you hear what he’s saying?”

“This discussion is sagging. Guys, cut this disco. Tell anchor to thank SS, not working. Don’t go to him again. He can leave in the next break.”

“And let’s cut to pictures in the disco. Celebration shots, empty party HQs. Let’s take a picture window with location. This is looking dull.”

“The spelling of Ibobi is wrong in the top band. Going as Ibodi. Please correct.”

“There’s still a mismatch between the supers and anchor reads. The supers need to be updated. Put a news editor just to oversee supers. We’re looking lazy on air.”

“And why are these special supers in blue? It’s too BSP. Annie, thought you checked them.”

“Yes, I did. Blue is our channel colour too.”

“But it’s not working here. Too BSP. Let’s change the template.”

“All the templates? Now?”

“But rendering now will take forever.”

“Think the opening montage has to change. Cut those Rahul shots out. Get Akhilesh. Get those campaign shots on cycle.”

“Guys, there’s a BJP press conference. Do we go to it live?”

“Going to it, anchor has to wind up disco.”

“But he has not started speaking.”

“Got to get reactions. Guests, try some Congress phonos. Will anybody from the Akali speak? We need Akalis. And somebody from Uttarakhand. It’s getting too UP-centric.”

“Ok, producers hear this. Get the Dehradun OB up, get Amritsar. Goa, what happened to Goa? We need guests on OBs, not down-the-line with reporters. And not analysts, we need the players. Let’s get four-way OBs. Let’s spread out now. I want to see a four-way OB in the next five minutes.”

“Call all the NEs. Meeting in my room in five minutes.”

“Ok, no more discussing the results in the bulletins, no more results headlines. Results are history now. Let’s look ahead, only looking ahead stories now. Brief all reporters, all anchors. And let’s plan the evening shows.”

Once Upon A Time In Democracia