Well, an apartment really. But did Asha Bhonsle dump her mom-in-law in an old age home for it? 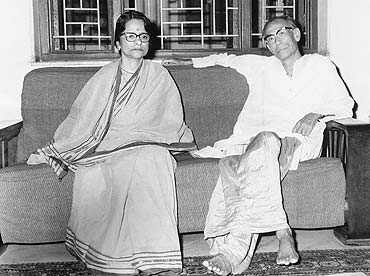 In all the celebratory notes that marked her 74th birthday last week, reputed playback singer Asha Bhonsle heard a rather discordant one. It was a source of discomfiture for the singer who had broken rules in personal life and displayed courage in her relationships decades before young girls were flaunting their live-in partners or younger men for husbands. The cause of the discord was her mother-in-law, 92-year-old Meera Dev Burman, mother of star film composer, the late R.D. Burman, and widow of the equally iconic Sachin Dev Burman.

Asha would have liked to keep her mother-in-law's recent months a secret, but that was not to be. Old and ailing Meera was more or less confined to bed soon after her son's death in January 1994. She had a full-time attendant to look after her daily needs. Visitors to the Burmans' sprawling suburban apartment in upmarket Khar recall that she was perhaps not in full control of her senses even then, and suffered from an old-age affliction. It was expected that Asha would care for her, particularly so because she treated R.D.'s apartment as her own, maintained it, even preserved his music room in his memory and used it for her riyaz.