One of Britain’s most pres­tigious tech awards, which resulted in forty companies being taken to the UK so far, the ‘TECH Rocketship Awards 2018 and 2019’, is open to Indian tech startups. 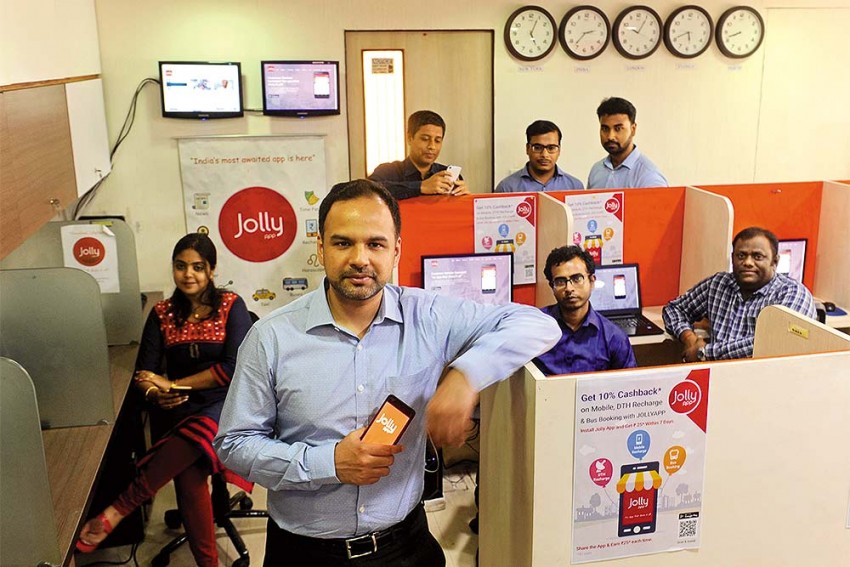 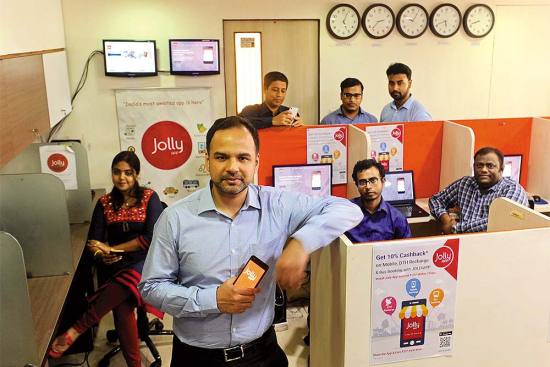 It was a blisteringly hot day in Calcutta; 36-year-old IT professional Umesh Agarwal, who had been out in the sun, just couldn’t wait to get home and turn on the air-conditioner. Except, “When I switched on the remote, it just emitted an eerie noise and conked off.” What followed was an exasperating conversation with the customer service personnel on the AC company’s helpline. “They were asking for detailed information—the machine’s year of purchase, the date the warranty expires, the model num­ber and other questions I could not readily answer,” he says. “I had forgotten where or whether I had stored the user manual and I thought, ‘How many people have the time or patience to dig through junk mail and recover the kind of crucial information they were asking for?’ My answer was, ‘Almost no one.’”

That’s when a brainwave struck. Agarwal decided to create an app that would digitally store not only information about consumers’ household appliances, electronic gadgets and other machinery, but even mundane data such as records of invoices, INS­urances, warranties, renewal dates, ann­ual maintenance certificates and other documents. “A customer who downloads the app, I thought, should be able to access all the information,” says Agarwal. “And companies too should find it useful because it would keep a record of purchase details of a consumer.” By winter, that is December 2017, he launched the app—calling it Jolly App—as well as going on to successfully market it (currently, it has an estimated 50,000 users) after being certified by the Union ministry of commerce and industry.

On August 9, the British Club in Calcutta held a roundtable conference for entrepreneurs like Agarwal, providing them with an opportunity to participate in an ongoing British-India joint business initiative which has been helping innovative Indian technology startups to go global by taking their ent­erprises abroad, namely the UK. Hosted and moderated by Bruce Bucknell, the British deputy high commissioner in Calcutta, the focus was on encouraging entrepreneurs from West Bengal and the Northeastern states. “There is a perception that the business climate is not conducive in Calcutta and east India,” Bucknell told Outlook in an interview.

For the uninitiated, the West Bengal government has been stuck with an “anti-industry” tag ever since chief minister Mamata Banerjee led a popular farmers’ agitation against industrial giant Tata Motors in 2011 before she came to power. After the Tatas were driven out, investors have by and large stayed away. This, in spite of the government’s attempts to shake off the stigma by hosting high-profile, industrial events such as the Bengal Global Sum­mit, an annual business meet which is attended by industrialists from across the country and around the world.

“Perceptions can be wrong,” says Bucknell, pointing out that “the government of West Bengal is opening up with the Silicon Valley Park in New Town”. And that “TCS has its largest campus in India in New Town, Calcutta”. More significantly, he says, “In eastern India and especially Calcutta, there is much potential, with many startups springing up in the city.” 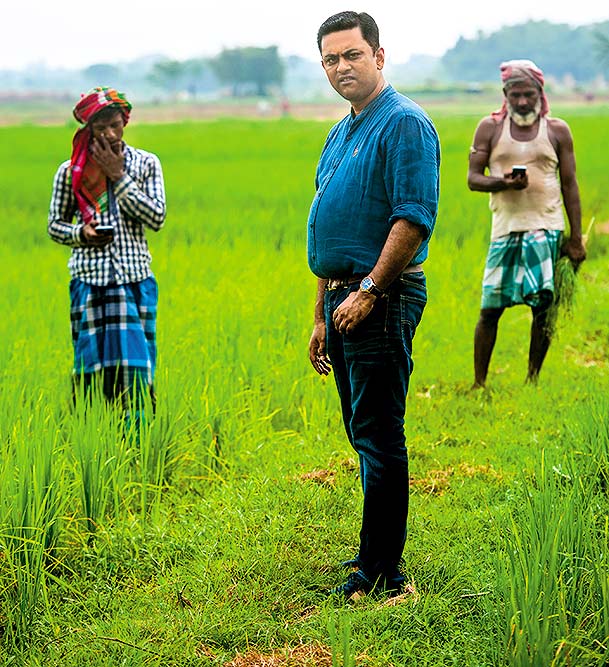 Among the participants who attended the conference was 42-year-old Angshujyoti Das, another Calcutta-based entrepreneur who founded and is CEO of Express Weather, and whose technology-based application, Farm­need, helps farmers troubleshoot. Its multiple functions include predicting the effect of weather on crops, the relationship between climatic changes and the quality and quantity of production and how certain fertilisers and pesticides can hinder or help agriculture. Explaining how the idea was developed, Das says, “Agriculture and technology are key areas of investment today, and yet, growers of crops don’t have access to it, even though it can be the best int­erface for knowledge. Reports of the kinds of difficulties farmers face had prompted us to develop the application through multidimensional researches related to crops, the relationship bet­ween crops and the weather as well as the prevalence of pests, disease and inf­estation. It was found that farmers and growers are often ignorant about these.”

The Farmneed digital app provides an interactive platform for farmers too. According to Das, “They can easily connect with experts and other growers of crops. The main objective is to help in protecting the crop, prevent environmental contamination and red­uce production cost, which translates into huge benefits for investors, namely insurance providers and funding banks by greatly reducing risks of financial loss.”

In terms of global trade, the east is strategically located, sharing borders with several countries.

Bucknell points out that there is a great demand for technological support to ensure such resourceful, globally workable ideas don’t just take off, but flourish. The British venture aims to provide that and give the businesses exposure abroad. Britain too stands to gain from the range of innovative products and services which the Indian startups offer. The endeavour is to create a mutually beneficial space for doing business; to foster a relationship that is a symbiotic one.

According to Bucknell, one of the key areas requiring technological support in India is the medical sector and startups which focus on innovations and research in the medical fields (MedTech) constitutes an important segment for investment under the British programme. Other than MedTech, the British business initiative is open to investing in several other sectors, including FinTech (dealing with financial enterprises), AgriTech (agriculture), AI (Artificial Intelligence) and Future Mobility.

Participants at the roundtable conference came from these different sectors and included 22 startup companies. While Agarwal’s business—his company which runs Jolly App is called Chatbot Technology Private Limited—falls in the AI category, Das’s startup is in AgriTech. 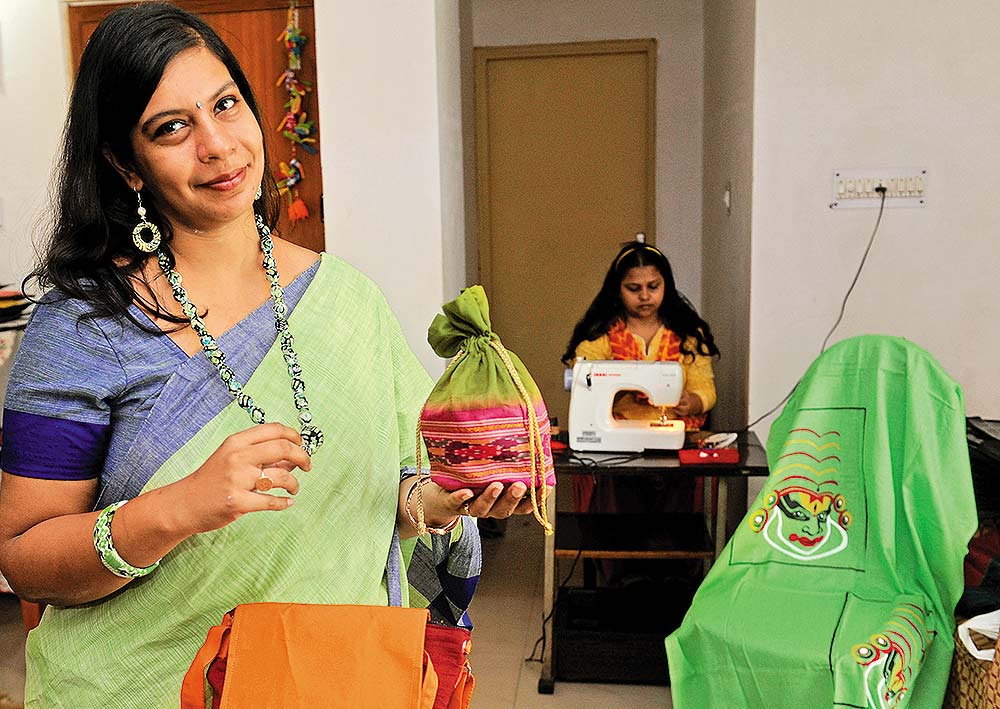 Sujata Chatterjee at the home of her portal, twirl.store, in Calcutta

Then there were other innovative business startups, such as Upscale Fashion Private Limited’s www.twirl.store, an online portal launched by 36-year-old Sujata Chatterjee, a former IT executive. “I wanted to use technology for a useful venture which would benefit the socio-economically weaker sections of people who don’t always find themselves included in the ongoing IT revolution. I identified an area where there was demand, as well as supply, but where the two were not connected. Today, the upper and middle classes have such a surfeit of garments that discarding these has become a headache. On the other hand, there are thousands of people in the districts, villages and even in the slums in urban areas, not to mention in disaster-struck areas, who are in dire need of clothing. Using technology—namely Internet (a donor just needs to log on to the ‘twirls’ page website) and social media, we are able to bridge the gap.”

Chatterjee found the British initiative extremely encouraging. “Being a startup, we always look forward to platforms where we can showcase our initiative,” she said. “These events present an opportunity for us to reach a wider audience and increase awareness about our work.”

Several startups, including Das’s Far­mneed, have already witnessed succ­ess under the British programme. “We have always been very keen to make Farm­need global. Our expansion plans in the UK could be possible because of such a technology and trade tie-up,” he says.

To recognise the most innovative startups, the UK Government has introduced a technology awards progra­mme. One of Britain’s most pres­tigious tech awards, which resulted in forty companies being taken to the UK so far, the ‘TECH Rocketship Awards 2018 and 2019’, is open to Indian tech startups. The deadline for applications is Octo­ber 8. “These awards are for technology startups which want to scale-up, go global and access capital from the UK market,” Bucknell states, adding, “I would like to see more and more startups from Calcutta, the eastern and the Northeastern regions applying.”

Indeed, the British deputy high commissioner stressed in his interview to Outlook that the significance of the strategic location of India’s eastern reg­ion cannot be overemphasised in terms of global trade. It shares international borders with several countries, including Bangladesh, Bhutan, Nepal and Myanmar.

However, the technology and trade tie-up between Britain and India is not limited to any region. Explaining how the concept to launch such a programme emerged, Bucknell says: “Britain and India have strong relations. We have a long, shared history. We have a very large, very successful Indian diasp­ora in Britain. This is a fantastic asset, as this group of people can provide what can be called a living a bridge between the two countries in terms of the flow of ideas, the sharing of technology and kno­­­wl­e­dge.” Britain, it is hoped, will be a welc­ome second home for these apps, as well as a launchpad for the leap beyond.

By Dola Mitra In Calcutta