Down the ages, a natural tolerance—tinged with faith—has been our subsoil. Why do my friends foist a dry import like secularism upon this rootedness? 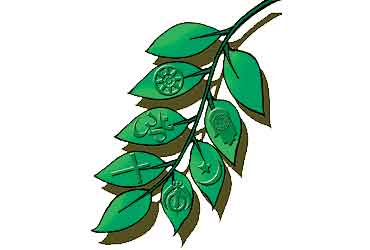 outlookindia.com
-0001-11-30T00:00:00+0553
Secularism is not communal amity; it is only one way of achieving such amity. As an ideology, it is not even 300 years old. Yet, despite the consistent failure of secularism to contain the growth of both Hindu nationalism and Islamic, Jewish and Christian fundamentalism in recent years—both in India and elsewhere in the world—only a few seem to have the courage to look beyond it.

In a recent column in this magazine (Abhor Singularity, May 31), my friend Kuldip Nayar has lamented my rejection of secularism and loss of faith in the plural traditions of South Asia. Nayar, whom I have given company in many battles—including some he would call secular—has got me entirely wrong. Actually, my criticism of secularism is an aggressive reaffirmation of these proto-Gandhian traditions and a search for post-secular forms of politics more in touch with the needs of a democratic polity in South Asia.

The concept of secularism emerged in a Europe torn by inter-religious strife, warfare and pogroms, when the resources for tolerance within traditions were depleted and looked exhausted. This has not happened in India, not even probably in most of South Asia. In India, a huge majority of riots—indeed nearly all of them—take place in the cities. Even the few that take place in villages begin almost always in the cities. Perhaps then it’s no surprise that in the last 50 years, less than 4 per cent of all riot victims in India have died in villages—where nearly 75 per cent of Indians stay; more than 96 per cent have died in cities, where 25 per cent of Indians stay. To go to an Indian village to teach tolerance through secularism is a form of obscene arrogance to which I do not want to be a party.

These ideas of tolerance in ordinary people and everyday life are tinged with popular religious beliefs, however superstitious, irrational and primitive they may seem to progressive, secular Indians. Modern India, till today, has not produced a single hero of secularism except for that fading star, Jawaharlal Nehru. If Ashoka, Akbar, Kabir and Gandhi, whose names the secularists routinely mouth, could do without the concept of secularism, so can the people of South Asia. They do not need leaders, vanguards, preachy academics or journalists vending fancy theories to educate them in the niceties of tolerance and respect for other faiths. The time has come for us to decipher the language and culture of those humble Indians who live by their ‘inferior’ beliefs and have made our society livable.

In a democracy, people will bring their values into politics, whether we like it or not. Instead of imposing on them an idea that makes no sense to the non-English-speaking majority—even the term dharmanirapekshata is a translatese that literally means amorality—why can’t we learn from and build upon indigenous concepts that have worked in real life over the centuries? If secularism only means the traditional tolerance of South Asia, why do we need an imported idea to talk about that local tolerance? And why import an idea from countries that have such shoddy records of religious, racial, cultural and ethnic tolerance? Why not, for instance, borrow the concept of convivencia from Medieval Islamic Spain, arguably the only truly plural polity Europe has produced in the last one thousand years?

However, I also know that it is pointless to raise these questions. Some things are just not possible in the dominant, colonial culture of India’s knowledge industry and among our official dissenters. Otherwise, at least the Indian Left would have picked up a thing or two from the aggressively non-secular, liberation-theology-based ideology of the Sandinistas. Instead of obsequiously aping, in the name of secularism, the Leninist crudities of a cut-throat regime that killed 6. 2 crore of its own citizens during its so-called revolutionary rule to become the exemplar of India’s brain-dead, pre-war, colonial Left.

I am a child of modern India and a non-believer myself. It has taken me many years to turn a traitor to my class—the urban, western-educated, modern Indians—and to learn to respect the people who have sustained Indian democracy using their tacit theories and principles of communal amity. That has not turned me into a believer but forced me to rediscover, study and reaffirm these theories and principles in my work during the last 20 years. In this effort, I have been guided by Gandhi’s maxim that those who think that religion has nothing to do with politics understand neither religion nor politics. I leave it to the next generation of South Asians living in South Asia to judge if it has been all a waste of time.