A Bengali Scaled The Everest First

An Indian exhibition recounts the glorious past of British mapmaking in the subcontinent. But no one's talking about the Indian contribution. 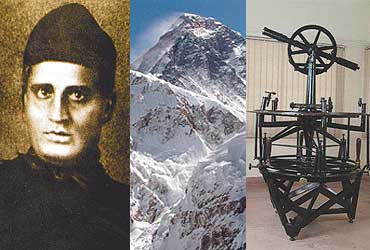 It began 200 years ago at the Great Trigonometrical Survey of India when the first measurements were begun by Col William Lambton, surveyor general of India. By the time George Everest took over the survey after Lambton's death in 1822, the calculations were four years in arrears and many of them were going nowhere. Much of that changed in the mid-1830s with the hiring of Radhanath Sikdhar, a young mathematical genius from Calcutta's Hindu College.

Keay tells a British story not widely known. But within that story sits—discreetly—an Indian story that even now barely, and only incidentally, surfaces. That this most remarkable of experiments could not have succeeded without critical scientific contributions by Indians. That, the world still does not know. Worse, India did not seem to care.