The achievement is incredible but the effort exhausts you in the end. 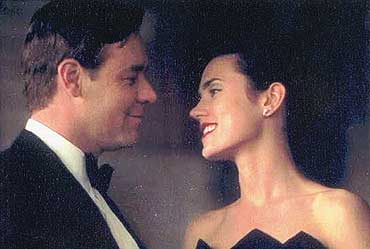 The achievement is incredible—mathematician John Nash's life in schizophrenic fast-forward, told through Crowe's liquid eyes. But the effort exhausts you in the end. The story in the beginning is all about Nash's meteoric rise to fame as a theoretician—he makes it to the cover of the Forbes magazine and gets the mit professorship after a brilliant opening at the Princeton University. It then takes a detour into Nash's delusions, which lead to his eventual dismissal. The third part deals with the man's will to fight his way through without the aid of medication. Had he stuck through evolving a different cinematic style for all three phases, director Ron Howard might have scored a masterpiece. He, however, remains obsessed primarily with the delusions. In one of the first sequences of the film, a 360-degree steady-cam shot of Nash shows him deciphering codes for the fbi. The shot represents the spinning wheels of Nash's mind—a kind of preface that leads later to his mental imbalance. The shot creates a necessary urgency besides revving an ordinary scene with exciting material.

While this technique endures well during Howard's depiction of Nash's relationship with his environment—a chaotic and disoriented relationship based primarily on the form and tenor of mathematics—it goes overboard during the delusions. These are shown representing Nash's super genius in a broken form and seem to overwhelm the subject matter itself. So much so that Nash's parallel world, peopled by a maniacal department of Defence agent (Ed Harris), a fabricated college roommate and an orphaned girl, fails to stick out as a memorable happening.

Strangely enough, however, the film doesn't totter due to over-indulgence. Crowe puts up a remarkable performance, turning his dour ruggedness—seen so explicitly in Gladiator—on its head. It is quite likely that a less austere might have turned Nash into a character out of Dead Poet's Society. But Crowe keeps his facial tics to the minimum, stripping down his aggression without losing sight of a survivor's doggedness.