Despite Khaleda's rhetoric, the 'anti-India wave' might peter out 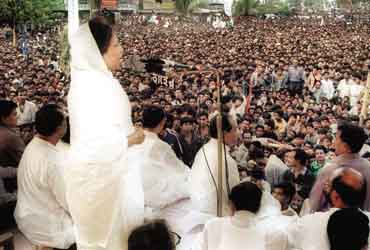 The meeting between the two PMs is now unlikely to happen because, as foreign minister Abdus Samad Azad said, a "mutually convenient" time could not be agreed upon. But fears of an Indian reprisal subsided following the Indian offer of talks—conveyed to Dhaka on April 30—for resolving the outstanding border disputes. Indian high commissioner Mani Lal Tripathi met Azad on May 1, even though it was a holiday, to reaffirm his government's sincerity about the talks. "We're serious about resolving the border issue as quickly as possible," Tripathi said. "We mustn't allow such incidents to cast a shadow over our friendly and cordial relationship."

Azad immediately welcomed the offer, but also said that because of certain difficulties "at our end" it wouldn't be possible to agree to the Indian proposal of holding the talks between May 22 and 25. But a foreign ministry official was quick to point out that this shouldn't be "interpreted as an attempt on our part to delay the talks. They'll be held shortly." Even then, the talks offer has meant trouble for the ruling Awami League. For one, Opposition leader Khaleda Zia was quick to brand Hasina an Indian stooge. "Now she's going there to beg apology for what our heroes did, instead of making Delhi pay for its adventurism," Khaleda said.