A Bag Of Damp Squibs 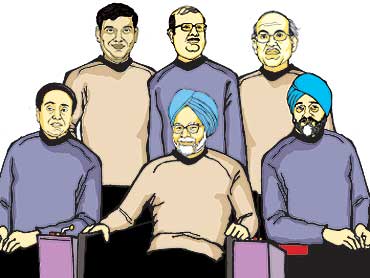 Kamal Nath, Commerce and Industry Minister
Thanks to the change of guard, in a better position to get bailouts for export-oriented industries.

Raghuram Rajan, Economic Advisor to PM
Handpicked to guide the UPA through the crisis, his role so far remains unclear.

Manmohan Singh, PM-cum-FM
Best suited to handle finance, juggling with too much at the moment.

D. Subbarao, RBI Governor
Is painting a weak outlook for ’09, lower inflation could lead to further cut in interest rates.

India’s new economic A-team has hit the ground running. But in an uncertain environment, will their spin work? The latest World Bank projections for global and India’s growth has added to the sense of gloom, caging "animal spirits" or that sense of confidence crucial for economic growth. As RBI governor D. Subbarao affirms, the outlook remains bleak for 2009-10. Worryingly for the UPA—which still has up to five crucial months in office—no one has answers to whether India has factored in the worst-case scenario.

This uncertainty partly explains the lukewarm response of economists and industry to the government’s Rs 30,700-crore stimulus package, preceded by the RBI’s move to bring down the cost of borrowing. While Rajiv Kumar of ICRIER calls it "a step in the right direction which could have been bolder", Jayati Ghosh of JNU bluntly dismisses it as "dipping your toe in water" without addressing the real issues. "Too little too late," is how Kerala finance minister Thomas Issac describes the financial package.

Why, even former finance minister P. Chidambaram is unhappy with the stimulus package, albeit for different reasons. According to sources in the Congress, Chidambaram conveyed to 10 Janpath that he did not favour the 4 per cent cut in CENVAT as "he was worried about the revenue loss with the fiscal deficit expected to rise sharply". Official sources admit the tax cut across sectors found a place after Chidambaram became home minister.

The key designers of the package are the PM-cum-FM; Planning Commission deputy chairman Montek Singh Ahluwalia, the PM’s favoured candidate for the post of FM; RBI governor D. Subbarao. Commerce minister Kamal Nath is also playing a role in the new dispensation. Finally, cabinet secretary K.M. Chandrasekhar is tackling inputs from the committee of secretaries.

Though the PM has been in consultation with experts and think tanks, a feeling gaining ground is that not much of their input is being taken on board. Commenting on the "musical chairs", economist Prabhat Patnaik says, "Presumably the changes are not going to alter the decision-making process. That’s because the suggestions of more than half the people have been ignored by the Centre."

In matters of perception, the new team has moved quickly—and promised dexterity. But the lacklustre feedback makes it clear that industry seeks more steps and further bailouts. As the policy response incrementally meets demand, the question being asked is whether India can afford to have an "ad-hoc approach" to the crisis. More importantly, will the PM, preoccupied as he is with national security issues and many portfolios, be able to do justice to the full-time job of managing a slowing economy?

Pressure is mounting on the PM to appoint a hands-on finance minister. His top candidates—Montek and former RBI governor C. Rangarajan—are being opposed within Congress circles. With general elections barely five months away, the party wants a political heavyweight. That is a tall order, as a serious contender would balk at the short tenure. While various names are doing the rounds—it’s still unclear if we will have a standalone FM soon. For the moment, Parliament has been informed that Chidambaram will assist the PM to steer the finance ministry.

This ad-hoc approach has not gone down well. Underlining the urgency, former RBI governor Bimal Jalan says, "This is a shifting, violent situation and nobody knows the depths of the crisis yet...this is the time to watch out and keep thinking on your feet." The situation on the ground indicates the finance ministry would need to be more proactive as it has had to step in once again to "persuade" wary banks to ease lending rates.

Moreover, policy planners acknowledge that more steps may be required to boost business confidence, create consumer demand to put the economy back on track and shore up dwindling foreign investments. Suresh D. Tendulkar, chairman of the economic advisory council to the PM, feels the next step will come once the banking sector and industry respond to the "psychological stimulus" announced. "We cannot let the fiscal situation go haywire. Industry will always find everything inadequate."

The measures will only have an impact after several weeks, if not months. Take infrastructure, now on the fast track. Though over a dozen projects in the roads sector have been approved by the cabinet, it would take at least a few months before the funds are tied up and project implementation can begin. "The stimulus package is not instant coffee. There’s always gestation time. The downturn will continue for some months till the money flow begins. The package, meanwhile, will help create expectation and infuse confidence," states Gajendra Haldea, advisor, Planning Commission.

For the time being, all efforts are on to ensure funding from agencies like the World Bank does not dry up due to improper implementation of projects. Haldea also says that if there is a demand, the government will provide more infrastructure stimulus packages.

More relief is also around the corner, particularly for labour-intensive sectors, promises commerce secretary Gopal K. Pillai. "A few more steps like direct relief to the housing sector through easier loans are in the pipeline. In the case of non-banking financial companies (NBFCS) which are still choked, a plan to ease ECB (external commercial borrowing) to help them recapitalise may be coming soon," says Pillai. Part of the package is already directed at easing the credit line to NBFCS and small and medium enterprises.

There are indeed grave issues that need to be tackled quickly. With the fiscal deficit expected to touch 10 per cent of GDP, the government lacks the funds to go in for a major infusion. Meanwhile, industry remains downbeat, as access to funds, including those from overseas, is not easy. Instead of aggressively pushing growth—particularly in the sme sector, which accounts for the bulk of India’s manufacturing and exports—Yes Bank chief economist Subhadha Rao points out, "the policy focus has shifted to sector-specific needs since October".

The fear, of course, is further job losses if the economy slows down even more. Despite government efforts to rubbish such reports, they may well come true. That won’t help matters in an election year.

By Lola Nayar and Pragya Singh with Smita Gupta