In the next three years the number of mobile users will touch the 200 million mark. And with facilities like broadband, WAP or GRPS, convergence is not far behind. 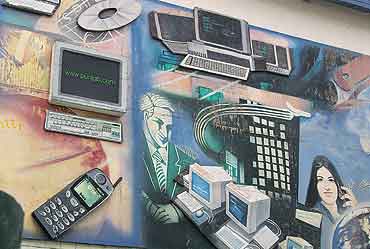 outlookindia.com
-0001-11-30T00:00:00+0553
Last year, an important event made few heads turn and proved how economic liberalisation had irrevocably changed our lives. In November 2004, the number of mobile connections went past landline telephone connections in the country for the first time.

This was extremely significant because wireline telephones have been in the country for decades, but its young wireless cousin was born just ten years ago. Today, mobile phones are the choice of the new generation and even the old. Even ten years ago, we waited for years to get a fixed line connection. For a mobile, we need to wait a few minutes.

The numbers speak for themselves. At nine telephone connections per thousand persons, India is already on the threshold of achieving the 2005 teledensity target of 10 per thousand.

As of February 2005, the total number of mobile phones in India was 50.8 million with the GSM sector alone accounting for over 40 million connections. The CDMA sector, a late entrant in the market, too has amassed over 11 million subscribers. Leading this crusade are Airtel in the GSM sector with 10.6 million subscribers and Reliance Infocomm with over nine million in its kitty. Against this, there are 46.23 million landline subscribers. This growth will only get better. Analysts expect the mobile industry in India to grow at a compound annual growth rate (CAGR) of 31 per cent through 2008—that's the highest in the Asia Pacific.

Two factors were responsible for this great growth story. One, the availability of cheaper handsets with better functionality which lowered the entry barrier and two, a significant dip in tariffs from a level of around Rs 16 a call and chargeable incoming calls to a low tariff regime of Re 1 a call. Handsets too have undergone a sea change. When mobile services were launched in 1994, mobile handsets cost upwards of Rs 40,000. Today one can acquire one for as low as Rs 2,500. Cellphone makers have also customised products to suit Indian tastes. Companies like Nokia and Samsung, for instance, have tailormade their handsets for India adding elements like an anti-slip grip, dust resistance, flashlight and a Hindi keypad.

The Gartner group says that the adoption of the unified licence regime has pushed the sector into top gear. It says that the new regime provided an impetus to growth and led to an acceleration of mobile adoption in the country.

Everyone in India has a cellphone today. From stockbrokers to professionals, from school and college students to lovebirds, the medium is increasingly shifting to the mobile phone. It has also pulled in late adopters—technophobe senior citizens who have always distanced themselves from the march of technology. It has even given birth to a new class of cellphone professionals—carpenters, plumbers, small-time contractors—for whom their handphones are their office and the basic instrument to earn a living.

Yes, Indians today live by their handphones. According to a Siemens survey released last year, 63 per cent Indian users cannot live even one day without their phones. Another survey stated that 70 per cent Indian mobile users confessed that they pick up their phone wherever they are or whatever they do. Only China outranked India with 81 per cent.

Mobile phone penetration in India is primarily being pushed by the new generation that is growing up at a time when mobile phones are well entrenched in society and has become as much a part of middle-class life as is the refrigerator or the family telly. For this no-landline generation, the tiny gadget is the only tool that they know to keep in touch with their near (and far) and dear ones. It is their primary window to the world.

The handset is also a fashion accessory today. For both men and women, the handset is fast becoming an item to flaunt.The smaller your phone is, the higher you have moved in status and society. "Do you have WAP, GRPS?" "Is your phone 3G-ready" (forget the fact that the service is not yet available in India)—these are questions that have replaced the typical what-car-do-you-drive talk at parties?

Take a look at the jewel-embedded, interchangeable cover and stylised handsets the cellphone majors are touting these days. And if fashion changes fast, so do the handsets. According to data collected by the industry, upper segment users change their phones at least three to four times a year while the middle segment definitely does so once in a year. An industry survey showed that 68 per cent cellphone users in India love looking for more fashionable models to keep up with the trends. Yet another study shows that 49 per cent Indians believe that their handsets make them look more attractive.

Industry data offers proof for this. Already most handset companies are phasing out their black and white models and shifting to colour. One out of three mobiles sold in India is a camera phone and one of ten is a smart phone or pda. 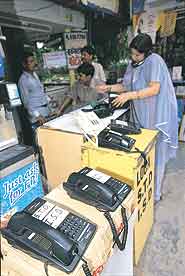 So what is the outlook for telecom India? "India can leapfrog into the future," says Jan Campbell, MD, Ericsson, India and Sri Lanka. He feels that with the fast growth in wireless penetration, India can, within a couple of years, not only reach hundreds of millions of people with basic voice communication but also with high quality broadcasting, broadband and other services. Campbell and his company expect new subscriber additions in the galloping industry to cross three million a month by March 2006.

Agrees Bharti Group chairman Sunil Mittal: "The Indian telecom sector is in an exemplary growth phase. We are at an inflection point where India is ready to move to the next generation of services. We are at a stage where telecom will no longer remain just telecommunications."

The Gartner group is optimistic too and feels that the next few years would be high growth years. In a paper prepared in 2004, the group said while 2005 would mark the emergence of consolidated carriers, cheaper handsets will fuel uptake of entertainment and gaming services in 2006 and 3G will emerge early in 2007.

And this growth will improve as India moves from pure voice and sms to more value-added services like video and high-speed mobile internet through new technologies like 3G on their handphones. Says a telecom equipment manufacturer: "Already over 50 per cent of users in metro cities are looking for services beyond voice and texting." Add to that mobile gaming which is emerging as a popular sport in the fast growing youth segment and is at the forefront of influencing the latest handset purchases. Currently, the 50-million-strong-sector adds about two million new customers a month. Says Campbell: "There is serious demand. The bottom of the pyramid in India is very wide and the addressable market size is big when prices are low."

Gartner is looking at around 165.5 million subscribers in India by 2008. Ericsson too expects India to have 200 million users by 2008-09. These figures look like a pipedream at this point but then, the telecom sector has proved everyone wrong in the past. Going by its track record, it could just do an encore.