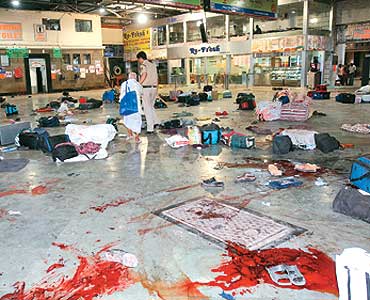 We've forfeited the rights to our own tragedies. As the carnage in Mumbai raged on, day after horrible day, our 24-hour news channels informed us that we were watching "India's 9/11". And like actors in a Bollywood rip-off of an old Hollywood film, we're expected to play our parts and say our lines, even though we know it's all been said and done before.

As tension in the region builds, US Senator John McCain has warned Pakistan that if it didn't act fast to arrest the 'Bad Guys' he had personal information that India would launch air strikes on 'terrorist camps' in Pakistan and that Washington could do nothing because Mumbai was India's 9/11.

But November isn't September, 2008 isn't 2001, Pakistan isn't Afghanistan and India isn't America. So perhaps we should reclaim our tragedy and pick through the debris with our own brains and our own broken hearts so that we can arrive at our own conclusions.

It's odd how in the last week of November thousands of people in Kashmir supervised by thousands of Indian troops lined up to cast their vote, while the richest quarters of India's richest city ended up looking like war-torn Kupwara—one of Kashmir's most ravaged districts.

The Mumbai attacks are only the most recent of a spate of terrorist attacks on Indian towns and cities this year. Ahmedabad, Bangalore, Delhi, Guwahati, Jaipur and Malegaon have all seen serial bomb blasts in which hundreds of ordinary people have been killed and wounded. If the police are right about the people they have arrested as suspects, both Hindu and Muslim, all Indian nationals, it obviously means something's going very badly wrong in this country.

If you were watching television you may not have heard that ordinary people too died in Mumbai. They were mowed down in a...