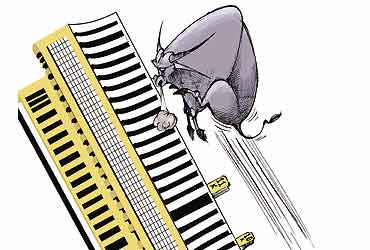 outlookindia.com
-0001-11-30T00:00:00+0553
The stockmarket is at dizzying heights as the bse Sensex kissed the 11000 points mark on Tuesday (March 21, 2006), translating into a gain of 63.8 per cent in the past 12 months. While the returns are encouraging (India is ranked 14th among 26 emerging markets, as per a Morgan Stanley study), the trauma for investors is that they have been faced with the same questions ever since the Sensex crossed 6250 (in December 2004) and moved into uncharted, new territory. How long will this rally last? Will the markets crash from here? Are markets expensive? Is it time to sell—or to buy?

The dichotomy is that whenever the media or experts have posed these questions, the Sensex has vaulted higher and higher. It took about seven months for the Sensex to rise from 6000 to 7000, another two-and-a-half months to touch 8000, just two months to reach 9000, three more months for 10000, and just 45 days to touch 11000. No wonder, investors are worried about the rapid rise in the market. While the answer to some of these questions are not easy to find, read on to get a feel of this bull run and how it could pan out in future.

Is this bull run different?

If you go by what experts say, the answer is yes. One of the major drivers of this rally is liquidity—strong fund inflows from fiis—who have invested a whopping Rs 1,30,196 crore in the Indian market since May 2003. The net purchases of Rs 14,383 crore by Indian mutual funds during the same period pales by comparison. Also, the overall mix of the fiis has changed. Says Shaina Mukadam, Head Research—IDBI Capital Market Services: "There are a lot of new funds now from Japan, Korea and the Middle East." Explains Shiv Puri, MD, Voyager Investment Advisors: "The quality of fii money has improved dramatically. They have a fully educated view of the Indian market."

Unlike the previous bull runs, where hype was built around India’s consumption (or growth) potential with the focal point being its one billion consumers or when valuations went berserk during the dotcom boom, this one is built on fundamentals. Adds the fund manager of an offshore fund: "This is a unique bull market. During the earlier runs, we saw lack of corporate governance and weak balance sheets. The 2000-bull market was led by software. We have come a long way since then. Firms have restructured, become stronger, and improved their balance sheets." With the country integrating with the global economy, Indian firms have started benchmarking themselves with global standards. Says Sivasubramanian K.N., senior portfolio manager (equity), Franklin Templeton: "Corporate India has become more competitive with returns on equity amongst the highest in emerging markets".

India vs Other Emerging Markets

Sustainable high growth rates are among the key reasons for India’s attractiveness as an investment destination. The GDP is expected to grow at 8-plus per cent in 2006, compared to 8 per cent for China and 5-5.6 per cent for countries like Indonesia, Malaysia, Singapore and Thailand. Adds Sivasubramanian: "India’s stature has been growing in recent times, with the economy ranked amongst the top 10 in the world in terms of GDP and as the fourth largest in terms of Purchasing Power Parity (PPP). Given its size and expected growth over the next few decades, an ‘India strategy’ has become a must for companies across the world with global aspirations." Adds Rahul Kher, head (international equities), Religare Enterprises: "We have a well-developed capital market and better access to information. Coupled with that, a large portion of the GDP growth is coming from domestic demand unlike other countries which are mainly export-driven like Russia and China." No wonder, experts feel that India will continue to be a growth story.

Will fiis remain invested in India?

Yes is the answer. But each category of fiis would have a different time horizon and return expectation. For instance, hedge funds would tend to have a shorter horizon, while pension funds as well as Japanese investors are traditionally long-term investors. Since interest rates in Japan are close to zero per cent, while in US they are near five per cent, it could have a bearing on the return expectation of the two sets of investors. But we could see more money, roughly $10-12 billion annually, flowing into Indian markets. Jaideep Goswami, head of institutional equities, hdfc Securities, adds: "India’s weightage should go up, led by higher investment limit for fiis as also various psus, including large central utilities, planning out their IPOs." But in the short run, there is a possibility of a temporary slowdown or reversals in inflows based on interest rate cycles and flow of funds.

Fund inflows from the domestic front have not been as aggressive, though the catch-up game is on. The recent collection figures (over Rs 10,000 crore) announced by mutual funds is an indication. Reliance Equity Fund garnered Rs 5,750 crore, the highest collection ever by a mutual fund. Says Atul Mehra of JM Morgan Stanley: "Indian investors’ faith in mutual funds has increased. Mutual funds too have given good returns and launched new products. There’s higher acceptance to giving money to professional fund managers to manage it." Also, fixed income returns have diminished, which has led to some shift in preference towards equities.

Valuations: not a major concern

Despite the humungous run-up, valuations are not that expensive, although in some cases, where the P/E multiples are in excess of 30-40 times, they look stretched. Explains Chetan Sehgal, director (research), Templeton Equity: "On the basis of performance vis-a-vis its own history, India looks expensive, given that the market has had such a run-up. On earnings terms, the corporate sector has kept pace with the increased earnings and therefore, on a P/E basis, things have not reached very high multiple levels." Adds Shaina of IDBI, "If we look at 2005-06 earnings, then it is expensive at over 19 times PE. But, once we have the March earnings, the discount on the basis of 2006-07 earnings will start looking attractive." Also, with the kind of GDP growth rate the country is witnessing now, corporate earnings (on a broad basis) should continue to grow in the region of 15-20 per cent over the next 2-3 years.

But, this doesn’t mean that there is no downside. Experts say the markets may see a correction of 10-15 per cent during the year. And on the upside, expectations are equally well-placed with the Sensex poised to rise to 12500-13000 levels by December 2006. The going, however, may not be smooth. There are macro concerns too. For instance, US Fed rates, which are currently at 4.75 per cent, are expected to go up to 5.5 per cent. At those levels, foreign investors may find it attractive to invest in US Treasury bills than to break one’s head by investing in equities. In India too, interest rates have started inching up. Although another 100 basis points rise in rates may not have a major impact on corporate performance, any rise beyond that could impact profitability. Such a disappointment on the corporate earnings front can lead to a decline in share prices. And the dream boom script may find some uneasy twists and turns.

By Vishal Chhabria with Vatsala Kamath and Rajesh Gajra