A thriller without thrills in which never once do you ask: what next? Or, for that matter, whodunnit? 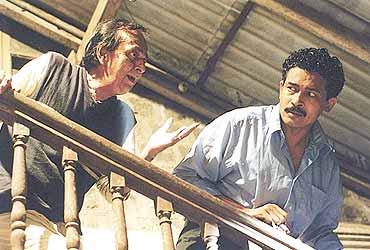 If Bhoot opened the doors of Bollywood to sound effects, then 88 Antop Hill carries the obsession to its excessive bounds. So much so that instead of getting chilled by what you hear, you feel like reaching out for the nearest pair of ear-buds. All in sheer annoyance. The film misuses the power of sound. Every turn of the head, every creak of the chair, every opening of the door, every flash of lightning becomes one huge noise. The crash, boom, bang, the silly yells and shrieks, and even the pointless silences carry on relentlessly from the first frame to the last. And in just a matter of minutes the jarring jolts expose a complete lack of good story-telling.

88 Antop Hill is a whodunnit. The audience witnesses the killing of a stranger even before the credits start rolling. And then the camera moves on to Pratyush Shellar (Atul Kulkarni), a banker who gets a distress call from his friend one night summoning him to a building called 88 Antop Hill, where he unwittingly gets entangled in the murder of a hooker, Teesta (Shweta Menon). There are still more slayings to follow. And, of course, a handful of suspects and some silly cops to solve the case(s). But no intriguing twists and turns, no delectable red herrings, no great moments of tension, no dainty lobs of unpredictability. There's nothing to grip you with anticipation, nothing to keep you guessing. In fact, the twist in the tale seems to have been shoved into the plot out of sheer necessity than to shock and awe the viewers.

Nandy tries to turn a mystery thriller into a horror show where even normal human beings are made to look ghostly and menacing and every Mumbai house, even the bungalow in upmarket Bandra, looks like a haunted haveli rented from the Ramsays. To make matters worse, he doesn't have a great set of actors to do the rescue act. Atul tries his best but fails. And the new find Jasmine is so phenomenally bad she shouldn't have been found at all. In the whole shebang, Rahul Dev does manage to stand out as the cop with an attitude. 88 Antop Hill is a thriller without thrills in which never once do you ask: what next? Or, for that matter, whodunnit?

Just A Prawn In The Game