Akhtari, the Bai who became Begum 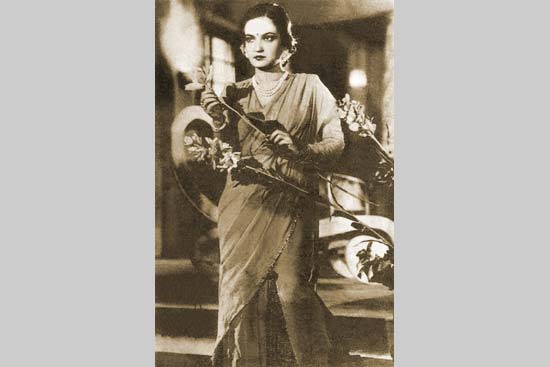 Hum ko mitaa sak, ye zamaane me dum nahin/hum se zamaanaa khud hai, zamaane se ham nahin (Time doesn’t have the nerve to wipe me out/Time owes its existence to me; I don’t owe my existence to it)

As Indians, one thing that we perhaps cannot take pride in is moderation—a balanced opinion on almost anything—it’s either good or bad. Not that I wish to pontificate on these extremes, but in the context of Indian classical music, which I practise, the extremes show up acutely; both from the point of view of the music as well as its social history—hierarchy and classification inc­luded. While in the context of Wes­tern music there are even questions being raised about the validity of genres like ‘classical’, given that it has existed over a span of 400-500 years and conti­nues to take new shape and interpretat­ion (for eg, is it even fair to compare Henry Purcell with Philip Glass?), in India hierarchies still matter. Historic­ally, these have also acquired serious social connotations­—in how we discuss genres of music, communities of musicians, musical lineages and much more, ostensibly with the concern and desire to preserve this rich tradition. Dhrupad is on the top of the list, followed by the highly evolved abstraction in ‘khayal’ and then the entertainers, thumri, dadra and other semi-classical genres. How music has been handed down to the family, extended family and stude­nts is also a very calculated tradition.

I bring this up in the context of a legendary Indian musician, the queen of Urdu ghazal, Begum Akh­tar. This is her centenary year. Akhtari’s is a life that exemplifies the journey of a Bai to a Begum. As I perform my tribute to this incredible woman, I see people still love her, revere her, respect her but are also awkward discussing her as Akhtari the Bai—this when she herself announces, at the end of her recordings in the 1930s, her name crisply as “Akhtari Bai Faizabad”. Akh­tari came from a community of women linked to the tawaif (courtesan) culture and eventually became the gaanewalis or the singing ladies. (Malika Pukhraj, the famous contemporary of Begum Akhtar, it is said, also made this considered transition.) All of this was already happening from the beginning of the 20th century by when the term tawaif had acquired impolite and judgmental implications. This was a situation where women like Akhtari, talented, entrepreneurial and successful, had to reinvent their public presence. It came out of the need to suppress, to hide and camouflage their ‘lowly popular perception’ and to stop feeling like a ‘victim’.

Brought up by a single mother, Mus­h­tari Bai, who was a tawaif herself, Akh­tari started her career as a perfor­mer while still a teenager. In the 1920s, she worked as a stage actress in Cal­cu­tta, most often essaying the role of the vamp. In some images from this time, she is seen ‘in a black velvet Western dress and smoking a cigarette with a long black holder’. In Lucknow, she set up her own salon, managed very ably by her mother. Akhtari, by now, was an artiste of calibre and only the very distinguished were allowed access to her mehfils. She had also made a name for herself across north India through a number of 78-rpm recordings relea­sed under the Megaphone label. She went on to do a small but successful stint in Hindi films where she sang and acted, as was the norm in those times. Even though she was trained by gharanedaar ustads in khayal gayaki, it appeared that she was always attracted to what the purists refer to as the “lighter genres”. This indeed is an irony given that her greatest contribution to ghazal singing is the classical treatment she brings to it—the raagdaari that she brought into it. She lifted ghazal into mainstream music festivals like never before. She also performed the thumri and dadra in a unique style quite her own.

Fiercely independent, the ustani was the first to flip tradition on its head, tie the ‘gandaa’ to her women students.

A difficult childhood, the poignancy of which pervades her music, stems maybe from the experience of loss at an early age. In fact, the expression of love as pain is a constant in her work, making the ghazal an appropriate medium for the expression of her genius. Some of her friends suggest that pain and depression had become such a refrain in her early life that in later years it became a habit—so much so she liked manufacturing sadness, even when there wasn’t reason for any. Her marriage to the well-known barrister, Ishtiaq Ahmed Abbasi, brought her closer to Urdu poetry (thanks to his scholarship) but it also brought the many restrictions of married life. She was eager to win hearts, to be accepted, to feel respected, became the “Acchi Ammi” of the family, but this also meant putting the brakes on her intense music career. As women in patriarchal societies, we are familiar with limitations, constraints and small, confining spaces. Begum Akhtar’s situation was compounded by her background of being a gaanewali.

Despite these odds, she was a woman full of life, humour and zeal. She had many friends, fans and lovers. She was known for her shaukhi mizaaz, her hum­our and wit. There are many stories about her and the then nawab of Rampur, who was smitten with her. One such story has Akhtar sitting on a chair made of silver given to her by the nawab and complaining to her friend Syeda Raza about him. When Raza wondered why she put up with his whims and suggested she leave him, Akhtari retorted, “I will, as soon as I get a table to match the chair.”

Poets of her day wrote specially for her, many a career was made after Akhtari sang a particular bard’s work. Eminent Urdu poets of the time, such as Jigar Moradabadi and Sha­k­eel Badayuni, formed part of her inner circle and she shared close friendships with many like Kaifi Azmi. A free-thinking, fiercely independent woman, she was supposedly the first vidushi or ustani who flipped tradition on its head by tying the ‘gandaa’, or the official thread that initiates a shishya into a learning tradition, to her women students. She was a trend-setter, a diva and perhaps a rockstar of her times. Rem­ember this was a time when there was very little electronic media, no social media, PR agencies or event managers.

The world of an artist is a mysterious one. Paradoxically, what often is a solitary engagement with one’s art beco­mes saddled with baggage when it eventually comes into public gaze. This makes the performance space an important factor for many musicians—one that can impact their lives and careers. In Akhtari’s case too, it was difficult to separate her life and her music, they had fused into the person she was and became. The Bai who became a Begum and went on to win impressive national recognition lives up well to that ghazal by Jigar which she sang in her beautiful voice!