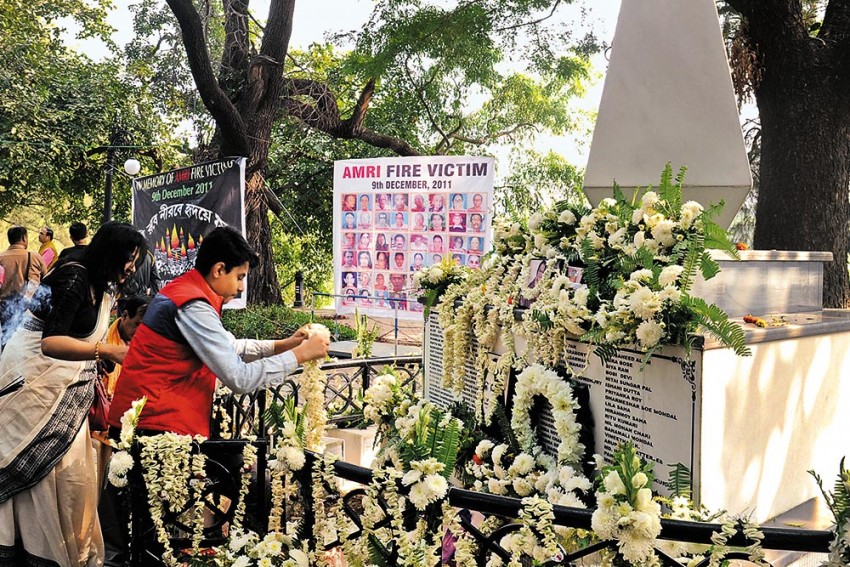 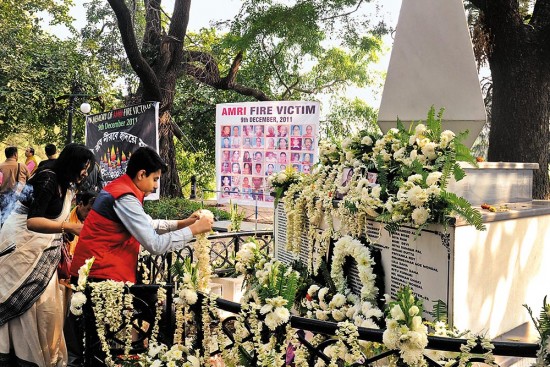 Dhananjoy Pal’s daughter was trapped inside the burning hospital, screaming for help, but a guard allegedly prevented her from getting out. “Who will clear your dues?” they asked. The 14-year-old died on the fateful dawn of December 9, 2011, one of the 94 who suffocated when fumes from a fire in the basement of the Advanced Medical Research Ins­titute Hospital (AMRI) in Calcutta’s Dhakuria spread to the upper floors through air conditioning ducts.

For the last seven years, Pal, a resident of Bankura district, has made the grueling 172-km journey to Calcutta and back every single time the courts ann­ounced a hearing in the case of criminal negligence which was filed against the hospital. Seven years on, he’s exhausted and dra­i­ned of resources. “We are middle-class people, without the finances required to pay for lengthy trials. We reposed faith in the legal system. But why does it take so long to get justice?” Pal breaks down, rec­alling his daughter’s premature death. “She was just a child,” he says, his voice quivering with emotion. “If she had lived she would have been 21.” Most relatives of the AMRI fire victims ask the same question. “Why is there no deadline?” Paromita Guha Thakurta, who lost her mother, 64-year-old Mri­dula Devi in the fire, demands.

Immediately after the tragedy, the West Bengal government had swung into action, with chief minister Mamata Banerjee getting the entire top management of AMRI, including its owners and board of directors, arrested. In what was considered an exemplary administrative act, on her instructions, the police filed a chargesheet in just 84 days. In all, 16 officials were charged with cases of criminal negligence, including Section 304 of the Indian Penal Code (culpable homicide not amounting to murder) and Section 304 (attempt to commit culpable homicide), which carry a maximum sentence of life imprisonment and seven years res­pectively. They were also booked under Sections 11C and 11J of the West Bengal Fire Services Act, which pertained to flouting fire safety regulations.

“The proactive role of the state government had reassured victims’ families,” Guha Thakurta says. “But we cannot fathom what transpired subsequently to slow things down.” When, a year later in 2012, the arrested people started to get bail, it disheartened the families. “If the accused were found innocent and acquitted it would not trouble us,” said a relative. “But the trial was still on. Our main concern was that most of the accused being wealthy (several of them are industrialists) they could try to influence the trial. We could not compete with them.”

The aggrieved, exasperated relatives for­med the AMRI Fire Vic­­tims’ Families Association. Its role was to monitor progress in the case and mot­ivate each other to “keep the fight going for justice”. That role it performed doggedly. Raja Ganguly, who lost his 64-year-old father in the fire, flies in from Mumbai, where he works for a pharmaceutical company, to att­end hearings. Others came from Assam, other states and from distant corners of Bengal.

“The travel has been taking its toll on us physically and financially,” says one. “But there doesn’t seem to be light at the end of the tunnel of uncertainty. Justice must be served now, not in the distant future.” The total cost of travel and legal fees has crossed Rs 20-25 lakhs thus far. 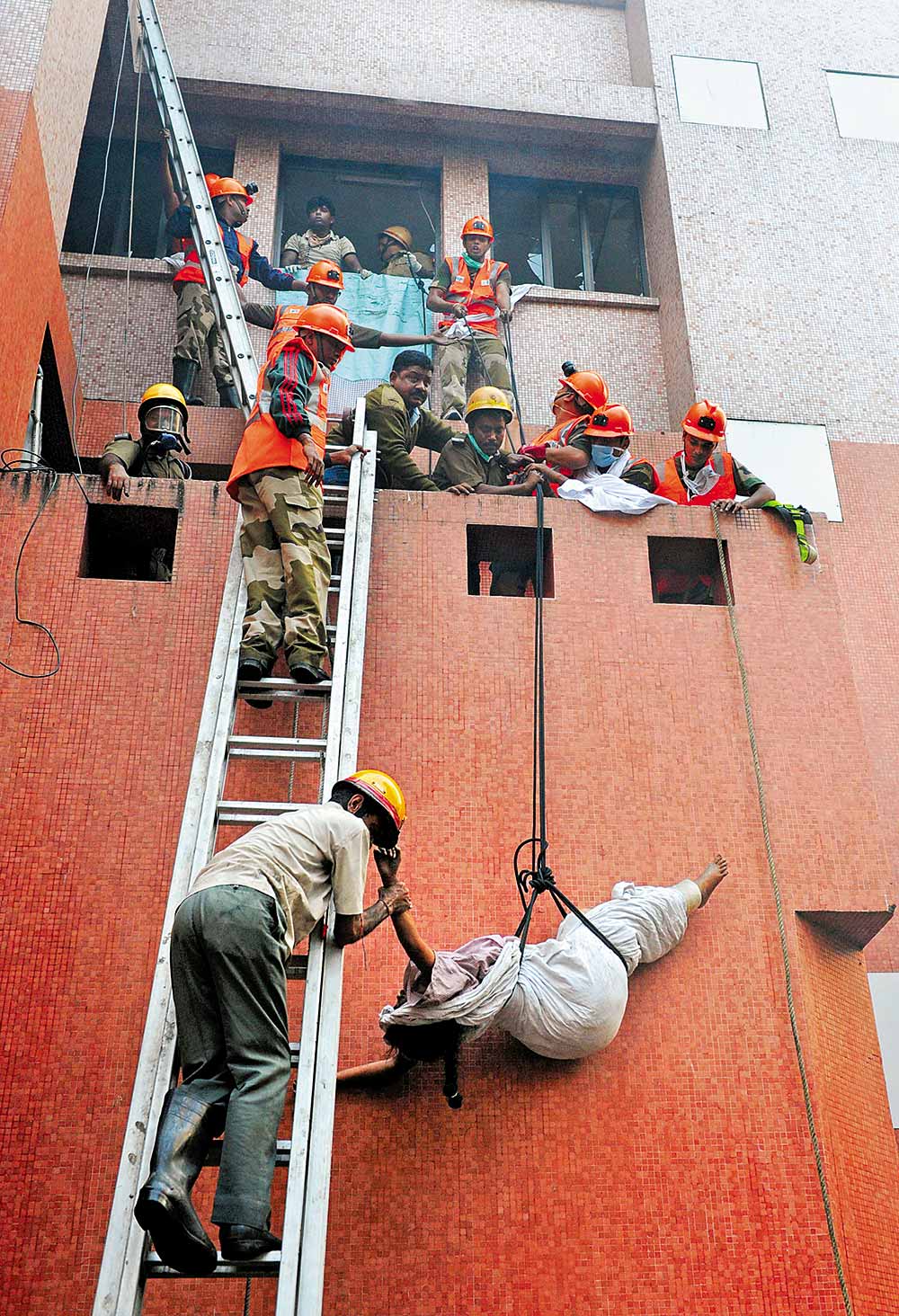 Rescue workers evacuate people during the AMRI fire on December 9, 2011

Victims’ families say that though they were provided prosecuting law­yers free of cost by the state, most decided to hire the services of legal experts individually. “We don’t doubt their (state prosecutors) efficiency, but in our experience, it is only when we pay that they are really interested.”

Victims’ families bemoan their silent fight. There should have been widespread national outrage, they all feel.

Explains Guha Thakurta, the president of the association, “The accused have hired top legal experts, so we need to ensure that our lawyers are at least equally good.” She rues that, given the gravity of the case, victims’ families stand alone in their resolve. Seven years later, it’s the public apathy that sharpens the families’ sufferings. “It should concern the entire nation, because this was a man-made, public disaster, caused by the negligence of a group of people in whose care we had entrusted our loved ones.” Says Guha Thakurta. “It could have happened to anyone; there should be nat­ional outrage. Why are we forced to fight this as though it was a private matter?” she says, citing the Nirbhaya case, which generated so much anger that it forced Parliament to change the laws.

Guha Thakurta’s mother was admitted for pre-treatment diagnostic tests and was to be released on the night bef­­ore the fire. “Now we live with the regret of not taking her out that very evening.”

Seen through the cold logic of reason, removed from the pain of loss, legal expe­rts explain the delay as inevitable. Cal­cutta advocate Gitanath Gan­guly says, “In legal cases, especially criminal cases, pro­­­­cedural delays cannot be avoided. It is, unfortunately, int­rinsic to the system. For one, dates have to be decided according to the availability of both prosecuting and defence lawyers. Also, our legal system offers legal recourses to petitioners and there are appeals and counter appeals. Moreover, police investigation and witn­ess interrogation etc. are time-consuming processes. These cannot be rushed.”

Indeed, lawyers of the 16 accused in the AMRI case have filed several petitions. For instance, in September 2015, a day after the Supreme Court delivered judgment on the 18-year-old Uphaar case (in 1997, after a fire in Delhi’s Uphaar Cinema killed 59 people, mostly spectators, the owners were charged with criminal negligence) and waived punishment for the accused (in a later judgment in February 2017, the SC sentenced accused Gopal Ansal to a year’s imprisonment), Anindya Mitra, lawyer of AMRI accused and indu­strialist R.S. Agarwal, appealed to the Calcutta High Court that it direct a lower court to hear a plea seeking the quashing of charges against his clients. At that time, the AMRI victims’ families were appealing to the Calcutta HC for a speedy trial, prompting the defence lawyers to plead, in a separate appeal, that their petition be admitted before that of the families’. When asked about the 2015 appeal for exemption, Mitra tells Outlook, “It was for a very specific part of the case.... Beyond that I cannot comment.”

The AMRI case has been heard in seve­ral courts, including lower courts, consumer courts and the sessions court. The case continues in the sess­ions court, with the Calcutta HC monitoring it. Nea­rly 400 witnesses are to be called in for testimony, not to mention the acc­used and relatives of victims. Simultaneous compensation cases were filed by 40 families with the state consumer court; 10 families filed cases in the national consumer court, which was referred to the SC. A source told Outlook that out of 50, 49 consumer cases have been settled.

Ganguly says that even fast-track courts cannot close criminal cases until the judge is thoroughly convinced of the probe and the scrutiny of evidence. On the question of trials being vulnerable to influence, he says, “The wealth, influence and power of the accused is immaterial to the judge. These do not play a role in the deliverance of justice and if they do, these are aberrations and acts of criminality.”

That will provide little succour to relatives nearing the end of their tether, having borne the trauma for each day of these seven years. On December 9, they gathered for a memorial service for their dep­arted relatives. Along with prayers for their souls to rest in peace, a deepening sense of unease permeated their beings.