An exclusive opinion poll on the index of insecurity in the riot-torn state. 72 percent feel unsafe, 52 percent think BJP will win if elections are held today. 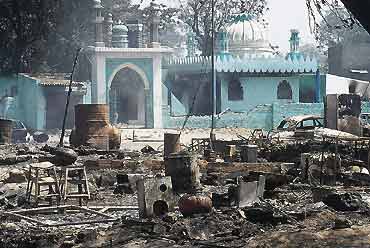 outlookindia.com
-0001-11-30T00:00:00+0553
The Jet Airways flight to Ahmedabad was nearly empty. But nothing spoke more eloquently of the state of the Gujarat economy than the fact that at the Regency Hotel, I was the sole guest. Wherever I went, fear hung like a pall over the people. Random stabbings continue and both Hindus and Muslims feel unsafe and insecure. Rumours fly thick and fast, and no argument can convince the people that these may be just rumours. That 500 Hindu women were gang-raped at Godhra before the train was set on fire, that a pregnant Muslim woman was cut open by rioters and the unborn child hoisted on a trishul.

The polarisation seems complete. Even middle-class and upper-middle-class Hindus participated in the rioting. A majority of Hindus seem actually to see Narendra Modi as their saviour and guardian! Even taxi drivers and petty businessmen, who have had hardly any income in the last one month, say that they don’t care, the Hindu-Muslim problem should be settled once and for all this time. When I ask people whether the police were biased in handling the riots, I am met with answers like: "Yes, they were. So what? They did the right thing!" What is amazing is that after the first phase of the riots, Dalits and Adivasis have taken a lead role in anti-Muslim attacks. The VHP’s dream of Hindu unification seems to have been realised in the most perverted way in Gujarat.

Secular organisations are tragically inactive. Congress and other Opposition politicians have been conspicuous by their absence in the troubled areas. Chunni Bai Vaid, a prominent Gandhian leader, says that the rumours and machinations of the VHP and RSS have totally communalised Gujarat. The secular forces have grossly failed to counter the situation.

But right next to Sabarmati Ashram, the Dalits with whom Vaid has been working for decades say they revere him but support Modi’s actions. I drive around Ahmedabad all day, stopping at street corners to ask people questions from my list. "Do you feel safe and secure in Gujarat?" I ask my first question to a man I have called over to the car window. "What do you think?" he asks me. "If you are feeling safe and secure, why don’t you get down from the car?" He is right.

Do you feel safe and secure in Gujarat?

Were the riots that followed Godhra justified?

Do you think the VHP and the state government connived to target Muslims?

Do you think the Modi government did enough to quell the riots?

Do you think police action was biased?

Did the central government do enough to stop the rioting?

Should the VHP be banned?

Should the Modi government be asked to go?

If polls are held today, which party will win?

Do you think relief and rehabilitation has been adequate?

Following the NHRC verdict, should the PM seek Modi’s resignation?

Methodology
Centre for Forecasting and Advisory Research (Cfore) conducted the survey in the cities of Ahmedabad, Rajkot, Baroda, Banaskantha and Panchmahal between April 1 and April 3. Over 1,800 persons were interviewed. The sample was representative of different communities and locations: Dalits and Scheduled Tribes, 25 per cent; Muslims, 10 per cent; Rajputs 15 per cent; other caste Hindus, 45 per cent; and others, 5 per cent.

(The author is director, Cfore, and conducted the survey in Gujarat.)

The Dance Of Shiva