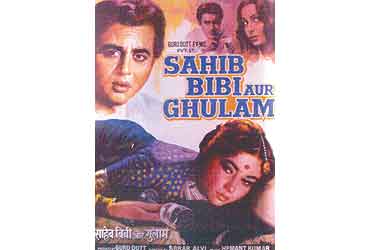 
This lyrical tragedy—which, with its masterful portrayal of the disintegration of a Bengali feudal family and the end of a way of life at the turn of the 20th century in Calcutta, has often been compared to Satyajit Ray’s Jalsaghar or Orson Welles’ The Magnificent Ambersons—is not signed Guru Dutt. Abrar Alvi, Dutt’s screenwriter, is credited with directing it. Officially Dutt produced the film and directed its song sequences. Yet, the film is quintessential Guru Dutt, imbued as it is with his poetic sensibility, romantic melancholia and unique visual style.

Adapted from a Bengali novel by Bimal Mitra, the film charts the decay of the Chaudhuri family through the eyes of young educated villager Bhootnath (Dutt). Meena Kumari gives one of her best performances as Chhoti Bahu, the middle-class wife of the youngest son (Rehman), who finds a kindred spirit in Bhootnath. Neglected by her kotha-habitue husband, she ends up a dipsomaniac. The pain and pathos in her enactment of the ‘Na jao saiyaan’ song sequence in which she, miming a courtesan, pleads with her husband to stay with her that night brought a sexual explicitness never really seen on the Indian screen before. And seldom since.

The film not merely captures a society in transition but also effectively juxtaposes the personal with the social. As he witnesses the end of an era, Bhootnath too...